An estimated 80,000 enthusiastic fans turned out for the two-day event despite intermittent overcast weather.

Several civilian performers were also featured, and more than 50 military and civilian aircraft were on display.

The mission of the Blue Angels is to showcase the pride and professionalism of the United States Navy and Marine Corps by inspiring a culture of excellence and service to country through flight demonstrations and community outreach. In 2016, the Blue Angels will celebrate the team’s 70th anniversary. Since 1946, the Blue Angels have performed for more than 484 million fans. 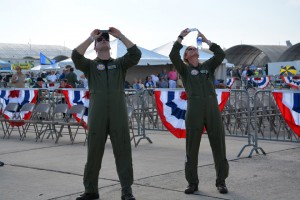