What does it mean to be a “good Samaritan”? Typically, when we hear the term we think of a charitable and helpful person; a person who acts in favor of the greater good, who aids another without a thought of how he or she might be advantaged (or disadvantaged) by helping. Following the spirit of the holidays and giving season, we could think of no better way to celebrate than by singing the praises of a local do-gooder who has been a guiding light to countless local students over the years, inspiring them to reach beyond their perceived limits. So, who is one of Pensacola’s very own good Samaritans? None other than William “Uncle Bill” Willis.

Uncle Bill spent his career as a high school teacher, bringing history to life as an American and European history teacher presenting to both traditional and Advanced Placemen-level studies, beginning in 1976 at Woodham High School. Later, when Woodham became a middle school, he transitioned to Pine Forest High School in 2007 before finally retiring in 2015. He sponsored a high school academic team, “Brain Brawl,” at Pine Forest and it often produced champions.

“Bill was an exemplar teacher, impacting the lives of thousands of students,” said Gordon Smith, leader in rallying help for Uncle Bill’s Surprise Dream Trip. “That was enough to inspire us to return in a small way the big investment he made in us. As we pulled this gift together, we also learned of the impact he made with his coworkers by mentoring faculty, the love that he brought to his family and community, and the contributions he makes to his congregation. Truly, he makes a difference in all his worlds.” 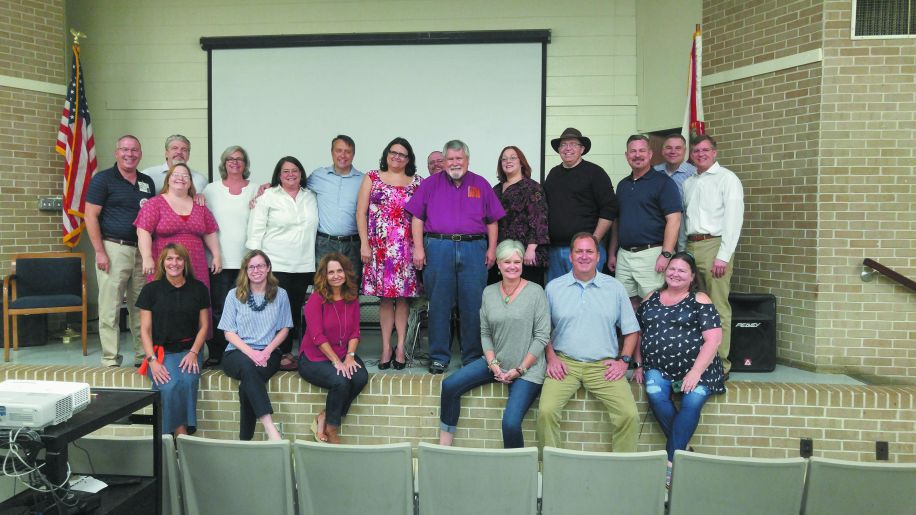 For many of Bill’s students, he admirably blurred the line between “formal” and “extended family,” which is why so many refer to him as “Uncle” Bill.

After finding out that Bill had made a Facebook post saying he was finally giving up on his lifelong dream to visit Italy, the birthplace of the Italian Renaissance that holds special meaning for history-buff Bill, for health and financial reasons, one of Bill’s former students, Gordon Smith, expressed his concern on social media and asked a few classmates if they were all feeling the same way.

Within a week, the small group of alumni had a secret Facebook page set up, a “caring conspiracy” if you will, which was titled Uncle Bill’s Surprise Dream Trip, where even more of Bill’s students joined and pitched in their ideas and enthusiasm.

“As we came together to secretly surprise him, we found so many others whose experiences were similar and in many cases so much more profound,” explained Gordon. “The students whose lives he touched were left with a particular and unique mark, and we all cherish it still.”

As many as 600 members, who all had been influenced by Uncle Bill in one form or another, pitched in to help with the surprise trip to Italy. Thanks one member in particular, they opened an account on YouCaring.com, which at last count had as many as 134 contributions totaling $15,550 to the surprise trip fund.

In addition to Gordon, who helped rally together the rest of Bill’s rag-tag group of alumni from over the course of his teaching career, there were a few students who took the lead in organizing various areas of the trip plan—from travel, destinations, and fundraising to planning a party. In fact, several students had become travel agents, which helped the group indentify an array of options for Bill’s surprise trip.

The cost of the trip was estimated according to Bill’s own finances and health; the committee scouted a variety of options suited for Bill’s health needs. Since the committee didn’t want Bill to travel by his lonesome on his dream trip, the budget was doubled so he wouldn’t be traveling alone. They also considered what Bill would need to go out of the country, including small details like passports and spending cash. The crew also set aside money for Bill’s mother, since he is her primary caregiver, so her needs could be met while Bill was away.

As Gordon explains it, getting people to donate was a crash course in fundraising for him; he relied heavily on advice from Christine, as well as his understanding of Kickstarter campaigns and annual NPR drives. The key was gently reminding people the chance to donate was there, without annoying them, so the team started with weekly updates that received a pretty quick and impressive response.

The best part of it all? Uncle Bill’s legacy carries on in his students who went on to become teachers themselves—as well as doctors, lawyers and more, all of whom became successes in all walks of life and all of whom point to Bill as an inspiration.

In fact, because of the overwhelming responses and number of donations, the committee had considered other goals of letting Bill go on other trips, take care of bills, or possibly using leftover funds to start a scholarship in his name for the generations to come.

While the details are still being finalized, it looks like Bill will be targeting a trip to Italy in spring of 2017. It goes without saying that Bill has touched the lives of many, including those now reading his story. If you feel inclined to pay it forward and keep the good will going, check out how to make donations at youcaring.com/bill-willis-627101.