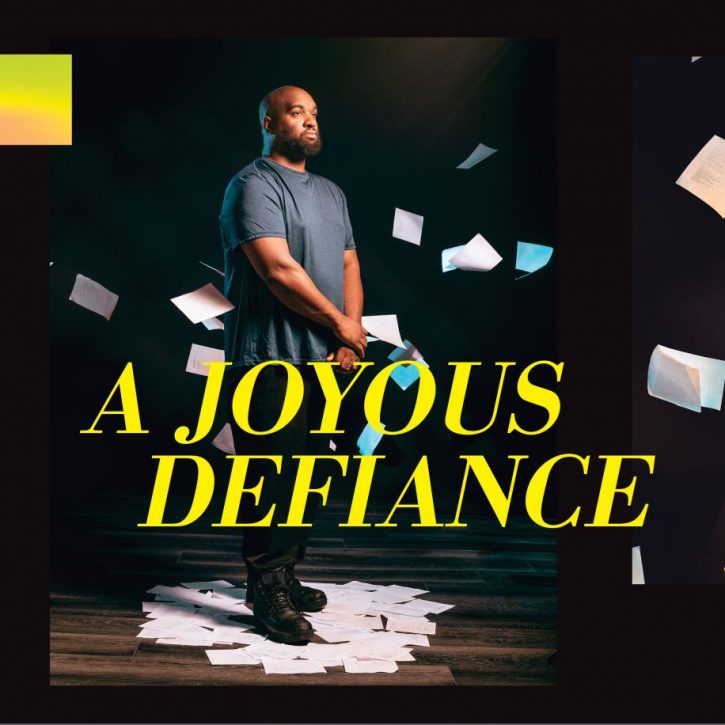 Lost in the clutches of a fantasy novel or scouring the pages of journals and composition notebooks, gifted by his mother, are fond memories of Charles McCaskill Jr.’s childhood. As he grew older, roaming his neighborhood in Warrington, taking in the world around him and being shaped by the women raising him, he first discovered poetry in high school. Soon after, McCaskill would nervously read his first poem at an open mic at End of the Line Café, cementing a new era of his life and the community of writers he found himself within.

Today, many people may know McCaskill from his involvement in the Pensacola Poetry group. When the group of poets expanded from End of the Line Café into the now shutdown Sluggo’s, McCaskill stepped up to find the new venue at Constant Coffee & Tea. Serving as a regular co-host and a staple at the poetry readings, he formed intimate friendships and a support system for his writing. This year, after being selected as a finalist for the Poet Laureate of Northwest Florida, McCaskill released his third book On a Random Bookshelf in My Mind.

“I just wanted to get my words out there,” McCaskill said. “My first book came out when Black Lives Matter was gaining traction again. I was witnessing all of these horrible things happening in the country, and I needed to say something. I couldn’t stick to the old, fluff-filled, love poems I was writing—I had to say something. The title of the book, How to Lose Friends and Alienate White People, comes from a Facebook argument. I wasn’t saying anything controversial. I just was explaining experiences and issues that I witness in my identity as a black person in this country. That’s only divisive, if you want it to be divisive.”

McCaskill’s first book of poetry, released in 2018, is saturated in the American political environment, police brutality and experiences living in the South. His second book, Five Love Letters, released in 2019, is a return to his early writing style. It serves as an assemblage of mostly previously written poetry to family, friends, past romantic partners, his wife and himself. While his first two books have heavily curated themes tying the work together, his new book is a literal and metaphysical look inside of McCaskill’s mind.

“I was really fascinated by Stephen King’s book Dreamcatcher,” McCaskill explained. “All of the characters have a memory warehouse, which is a visual representation of their memories that they can physically sort through. One day I was just thinking, ‘What would a random bookcase in my mind look like?’ Well, it would have a poem thumbtacked to the bookcase written by my wife, photo albums of friends, eulogies to past family members and random notes about experiences.”

The book opens on a prayer written by McCaskill’s wife, Marissa. The prayer was written shortly after Ahmaud Arbery’s murder, an unarmed black man shot while jogging in Georgia, and prays for McCaskill’s safe return home each day. As the book unfolds, it unearths poems focused on black joy, violence, Pensacola history, gentrification, family and honoring lost lives.

“There is a defiance to joy when so much of the world is trying to stifle it out of you. Any marginalized group knows how this feels—people of color, LGBT+, immigrants and indigenous people,” McCaskill said. “I feel like it’s important to focus on that joy sometimes when on the outside, there is pain, fear and anger trying to stifle it out of you. Going back to my own childhood experiences, there was so much joy in playing with my cousins outside or listening to the voices of my mom and aunts making dinner. The pain needs to be talked about, of course, but sometimes I just want to write about seeing black kids laughing on their scooters and bicycles—just being kids. Especially when we’ve seen violence and tragedy against children like Trayvon Martin, Tamir Rice and so many others.” 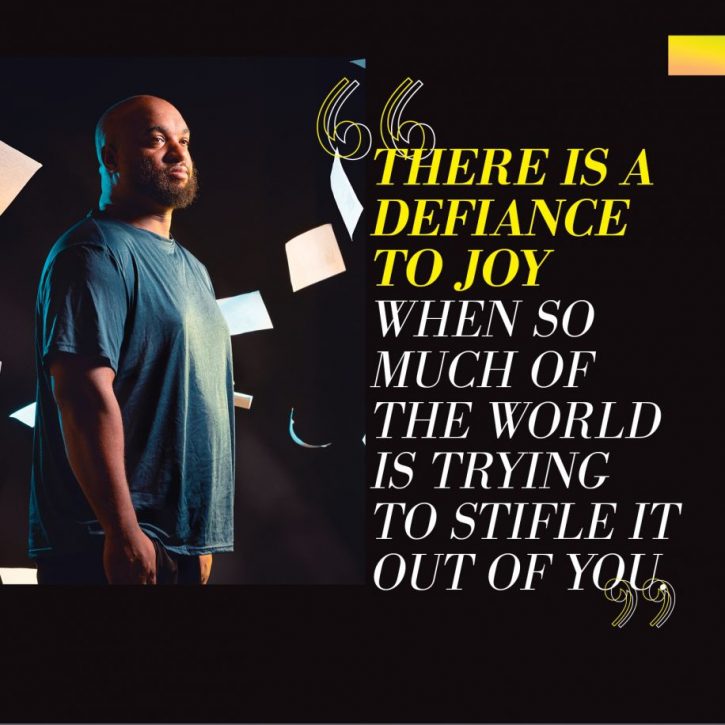 These images of joy, as well as grief, can be seen segmenting the collection of poetry in a bold-faced print, like a voice of refrain. The untitled bold-faced poems are moments, images and experiences that tie the random bookshelf together. As McCaskill explained, they come to him as musings, random thoughts and usually Facebook posts.

“One of the moments comes from meeting a young woman at a park who was really distraught,” McCaskill said. “I was with my wife at the park, and this woman asked us if we could just watch over her son while she went behind the vehicle and cried. They are these random, powerful moments that we all encounter in life. Those moments are poetry.”

McCaskill ties these musings together in his poetry with historical moments and experiences of living in the South. In the poem, “If These Bricks Could Breathe: A Poem Written on a Brick from John Sunday’s House,” McCaskill urges for the preservation of historical landmarks like John Sunday’s House in Pensacola, which was demolished in 2016 and replaced with townhomes. Another poem, “Est. 1898: A Poem Written on a Broken Time Machine,” explores the way in which themed bars and restaurants cater to an alternate history that excludes the trauma and oppression of minorities.

“There is an energy about a space that I feel is really meaningful,” McCaskill explained. “So much of the South has been scarred with pain—whether it be in the slave trade, civil war battles or segregation. There’s a lot of pain that has happened in a lot of these spaces. Pain and joy that is erased by gentrification. I have bricks from John Sunday’s Home sitting in my own home. There is something wrong about profiting off these spaces. If I were given a time machine and asked where to go, I wouldn’t go anywhere. Most of us have more rights today than we ever have.” 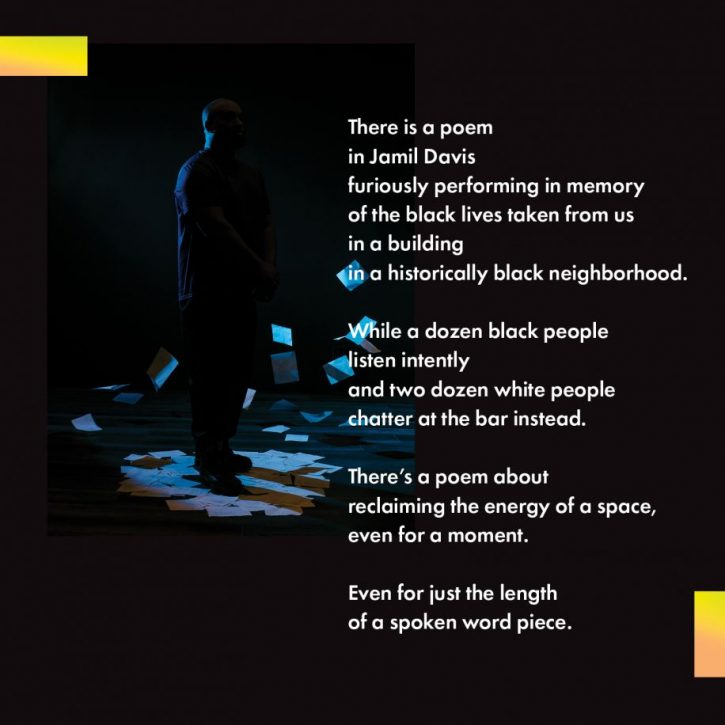 When asked about his writing process, McCaskill explained that words and ideas usually come to him while driving or working. He often posts rough concepts and ideas on social media to come back to them later and flesh them out. Often times, these posts create new lives of their own and lead to intense debates, which add another layer to his poetry.

“My intention is to always speak how I feel. When I read these poems at readings, I can feel the authenticity,” McCaskill said. “It’s amazing to be able to put these words together in a way that not only people can resonate with but also gives me peace. Most of the time, I’m reeling from the anger and feeling the sorrow and fear along with everyone else. The poems are my way of helping myself. These poems are my voice, and my voice is valid. If people can find something in my voice to resonate with, that’s all I want from my poetry.”

The resonance of McCaskill’s voice can be heard in each line, stanza and book of poetry as he wields his voice like a cathartic weapon in response to political unrest and racial injustice. In two short years, he has weaved and crafted his voice into three books of poetry. Two years ago, McCaskill had his debut launch of his first book at Open Books & Prison Book Project. He is returning to Open Books on Nov. 20 at 5 pm. for the official book release and selected readings from On a Random Bookshelf in My Mind. Copies of McCaskill’s work and the work of numerous other local poets and authors can always be found proudly displayed at Open Books.