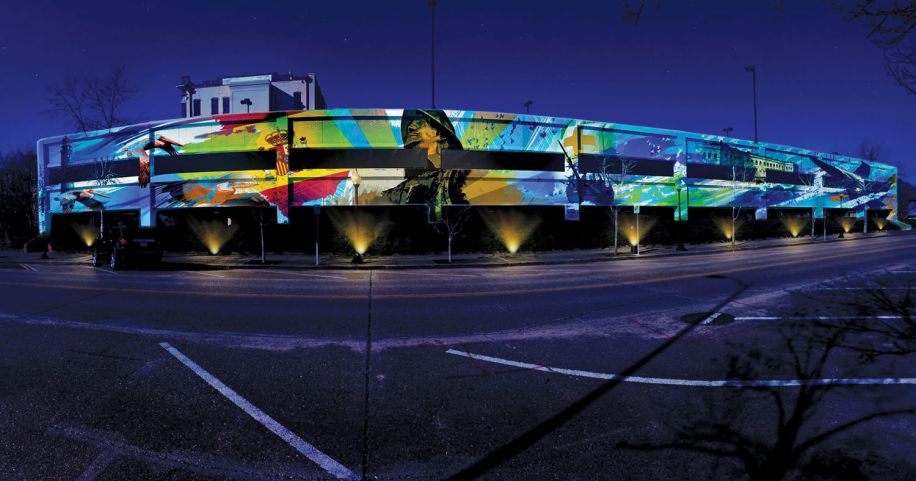 For a few years now, Ashton Howard and Evan Levin have been brainstorming on the perfect concept for an impactful, large-scale public mural.

This month, as part of a special live painting event with the Foo Foo Festival, the creative duo are putting their minds and brushes together to complete a massive mural that will span the length of the Jefferson Street parking garage.

“We wanted to make an impact,” said Evan Levin. “We love doing good things for the community and we’ve had our eye on doing a permanent mural for Pensacola for a long time.”

According to Ashton and Evan, the mural will tell the story of Pensacola through its depiction of local landmarks such as the Pensacola Lighthouse and Fort Pickens, along with well-known icons like the Blue Angels and significant figures from our area’s Spanish roots like Tristan DeLuna.

“To tell the story of Pensacola, we realized we had to include main icons that are part of our city’s history,” said Ashton Howard. “We’re a coastal community, so we really wanted to represent the city in the best way possible with recognizable landmarks and coastal scenery. But, once we start painting, I think we’ll have a lot of fun expanding off the original idea by adding more elements that organically come to us as we work.”

The 3,000-square-foot mural will stretch across the entire east-side wall of the Jefferson Street parking garage. LED lights have been installed so the mural remains illuminated throughout the night. Plus, the lights create an exhibit-like ambiance that further highlights the mural’s many facets and features.

Murals are nothing new to Ashton, who has worked on pieces for the walls of restaurants and surf shops along the West Coast in California, and painting comes naturally to Evan—who is an alumnus of Ringling College of Art and Illustration.

Plus, the two have collaborated in the past on the smaller-scale mural for Foo Foo Fest 2015 called “Fly Like Foo Foo Fest.” The art featured a pair of giant wings, which passerbys could pose in front of for photo mementos.

Ashton and Evan worked on the concept for the mural over the course of several months, passing emails back and forth with Photoshop files for the other to tweak, as well as meeting together to collaborate and make changes on the same computer screen.

Did we mention the mural will be painted entirely by hand? That’s right, no spray cans or graffiti art here. The artists will be using strictly brushes and rollers to apply an incredibly long-lasting exterior acryllic paint by Nova Color.

Since the mural is intended to be a permanent installation, Ashton and Evan had to consider how to address and prevent the adverse effects of harsh weather and natural wear over time. Thus, they came to the solution of using paints by Nova Color—a company that has been around since the 1950s.

In fact, Nova Color paints were golden standards for old billboards during a time when all content on billboards was painted by hand.

Other equipment the artists will use include a 40-foot Boomlift for hard-to-reach areas of the wall, and they plan to complete the mural over the course of eight weeks.

In the future, be on the lookout for the artists to release a special timelapse sequence from when the garage wall was still brick all the way through to completion. Throughout the whole process, GoPros and drones have snapped photos of the various stages of painting, and already 10,000 photos have been shot of the wall being primed.

When it’s time for Foo Foo, don’t forget to check out the one-of-a-kind live painting event and pay homeage to this mural for the masses. Starting Nov. 3, you can expect to see the two artists doing what they do best anywhere from 9 to 5 on Monday through Fridays.