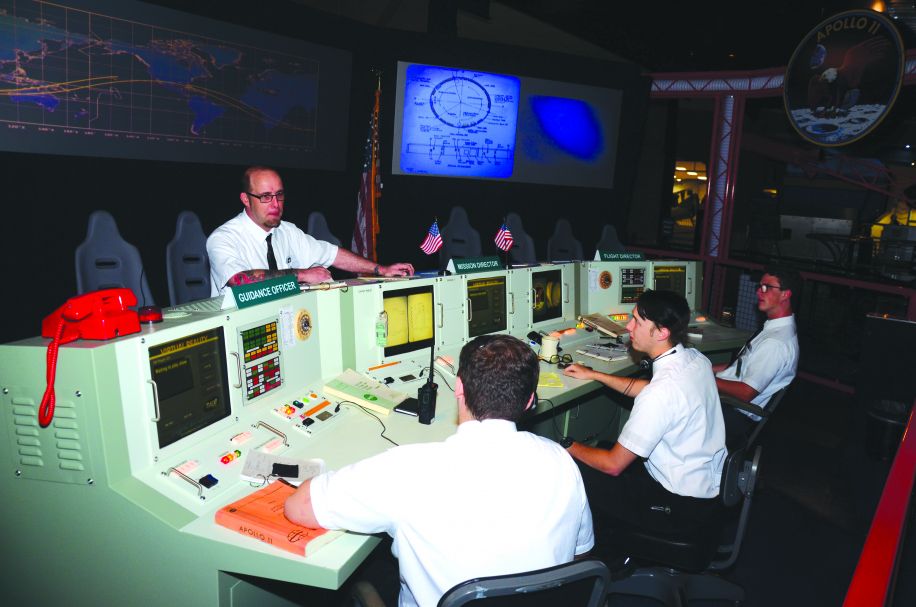 Now, visitors to the National Naval Aviation Museum onboard Naval Air Station (NAS) Pensacola can walk in the astronauts’ footsteps with the new “Longer Strides: The Apollo 11 VR Experience,” a virtual reality attraction located on the second floor of the museum. 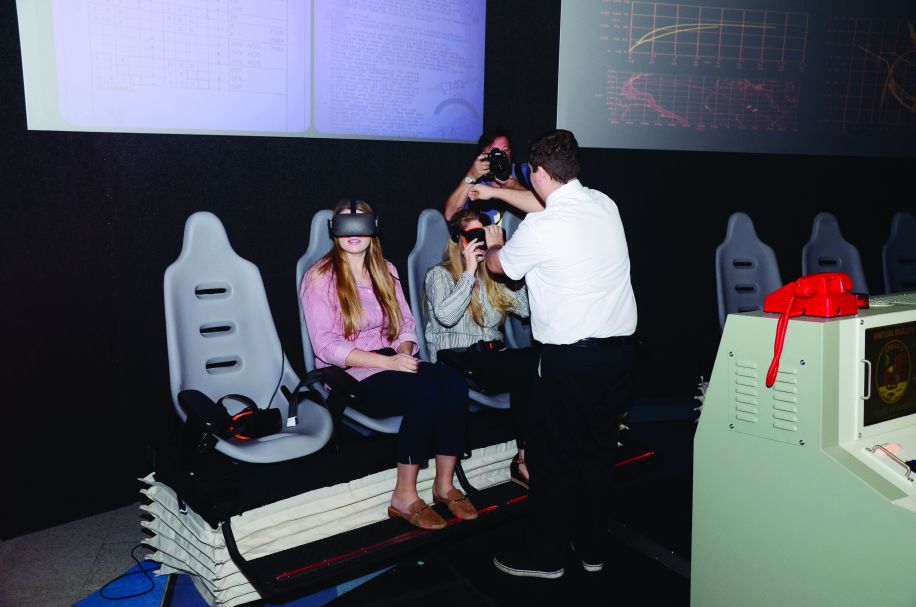 During the five-minute multisensory experience, guests are buckled into seats which shake, vibrate and pitch as their Saturn V rocket blasts off. Virtual reality (VR) headsets provide an all-encompassing perspective from the space traveler’s point of view as they are boosted into orbit, make trans-lunar injection, and descend to the moon’s surface in the Lunar Excursion Module (LEM).

The 50-year anniversary of the first moon landing is coming in July, and the Apollo 11 attraction is part of the museum’s celebration of naval aviation’s role in spaceflight. It is located in proximity to an actual Skylab Command Module, a spacesuit exhibit and other space displays.
Visitors are greeted by a close recreation of NASA’s Mission Control in Houston. Iconic 1960s-era computer consoles are manned by serious young men in short-sleeved white shirts with thin black ties; even the NASA coffee cups, slide rules and technical manuals are present on the consoles. An angled row of 12 seats with VR headsets await the voyagers while screens on the wall show monitoring positions around the world.
Retired Navy Capt. Sterling Gilliam, the museum director, was on hand April 4 for a media tour of the new attraction, which opened to the public April 5.

“We’re really excited the (Naval Aviation Museum) Foundation has brought this project to the forefront,” Gilliam said. “The timing is exquisite. As you know, 2019 is the 50th anniversary of the moon landing. Naval aviation’s involvement is space is phenomenal; the first American in space, the first American to orbit the Earth, four of the ‘Mercury 7’ were naval aviators. The first man to walk on the moon, the last man to walk on the moon – all naval aviators. This is a perfect fit for this museum as we tell the wonderful story of Americans in space, specifically naval aviators in space, in the Apollo 11 VR exhibit. It’s cutting-edge, we’re really, excited about it and the timing is excellent.”
Phil Crabtree, general manager Foundation Museum Support Company, explained some of what went into the attraction’s design.

“We wanted something special for this world-class museum,” Crabtree said. “We came up with the concept of this open-air VR attraction, where other people could watch someone enjoy it. We wanted to bring those key images from the 1960s Apollo era, the red trusses reminiscent of the Saturn V launch tower, and a recreation of Mission Control in Houston, which everyone is so familiar with. We wanted it to look like a snapshot in time from 1969.” 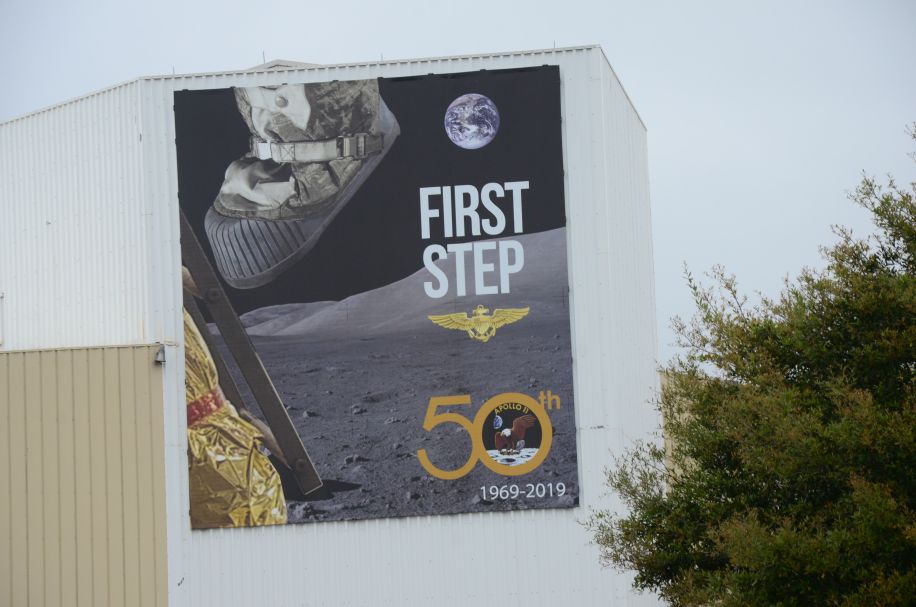 To round out the museum’s support of the moon landing anniversary, the Naval Aviation Memorial Giant Screen Theater will be showing “Apollo 11: First Steps Edition,” a new cinematic experience using never-before-seen 70mm footage from historic mission. The movie is scheduled to start May 17; plans include special showings hourly on July 19, 20 and 21.

“Longer Strides: The Apollo 11 VR Experience” seats 12 guests per show, and costs $10 per person. Astronauts must be at least 38” tall or 5 years of age.

For more information, visit the museum’s website at https://www.navalaviationmuseum.org. All non-Department of Defense (DoD) ID holders must enter and exit through the West Gate of Naval Air Station Pensacola at the following address: 1878 South Blue Angel Parkway, Pensacola, FL 32507. All guests age 16 and over must have a valid photo ID to enter the base.