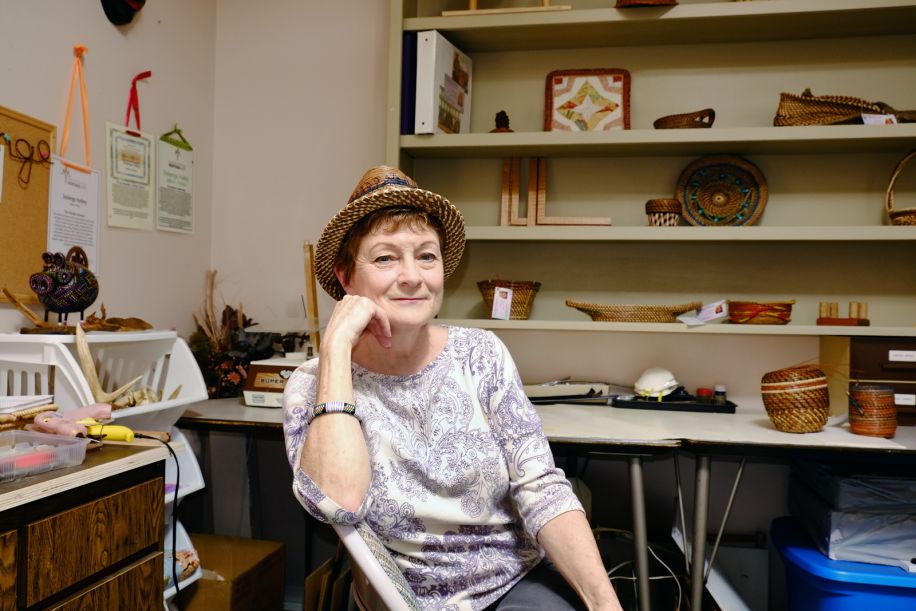 Solange Kelley is a Quebec native and self-taught artist with a unique medium—Florida pine needles. From baskets to vases, wine holders and hats, all of Solange’s Seminole-inspired art is created using long pine needles collected from her own backyard. Her work is on display at Blue Morning Gallery, where she has begun to host pine-needle coiling classes on the second floor. See Solange in action as she coils new pieces at her booth in the Heritage Section of the upcoming Great Gulf Coast Arts Festival Nov. 6 through Nov. 8. To learn more about the artist visit her profile page at bluemorninggallery.com, or you may inquire about her coiling classes by contacting the artist at solangekelley@hotmail.com.

When and how did you learn how to make pine needle art? When did you start showing your work?

An old desire to fabricate baskets re-surfaced after I left the workforce in the summer of 2010 and faced a backyard full of pine needles.  I decided to teach myself the basics of the pine-needle coiling method with the help of books and pictures on the web. I found it came rather easily to me since I had held needle and thread all my life for various needlepoint projects. By October of 2010, I had 12 baskets made and I knew I would never stop. A friend suggested I put them in consignment at Angel’s Garden on 12th Avenue. Upon meeting the owner Debbie Tracy, she advised that art shows were a more appropriate venue for my work. A few months later, I entered her annual Angel’s Garden Arts Show in the Cordova Square Park on 12th Avenue. Other shows followed, including an invitation to participate in Arts Alive Festival in Florence, Ala. in May of 2012, which was followed by Destin Arts Festival and the Heritage Section of the Pensacola Great Gulf Coast Festival every year since. 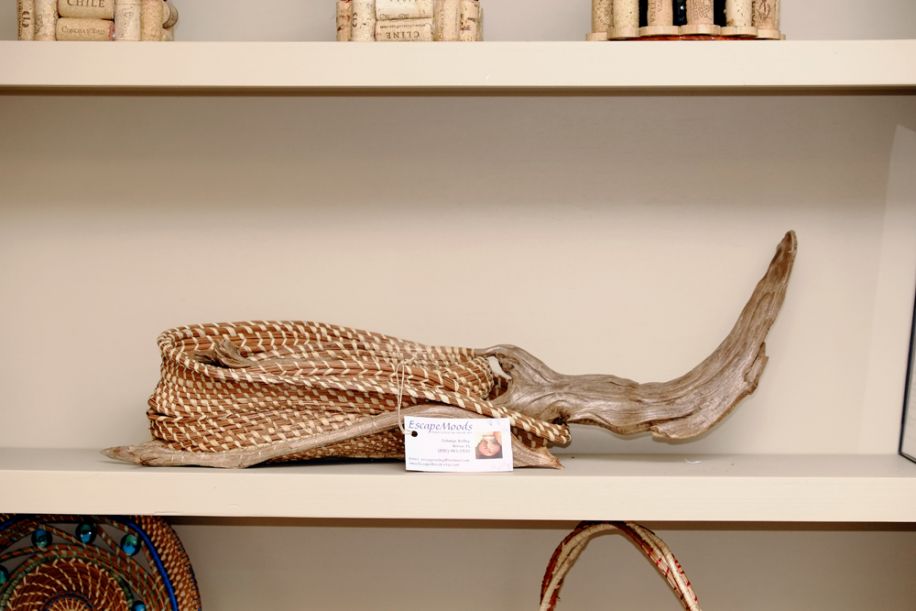 What makes your pine needle art work different from the work of Native American tribes? Do you model your art after that of a specific tribe?

My work differs mainly from the traditional ones done by southwestern tribes, such as the Seminoles, because theirs were made out of necessity to carry materials, use in ceremonies, or tell stories through symbolic animals or geometric designs that were meaningful to a specific tribe. However, my pieces are made for their aesthetic rather than utilitarian value. I also dye pine needles to add color to my pieces and, traditionally, this was not done by the Seminoles. However, my technique of coiling rather than weaving is similar to the one used by the Seminoles. The Seminoles used sinew, or string-like parts of animal muscle, to bind together pine needle containers. I use a artificially-colored sinew with a waxy feel for holding together my art work.

Describe your creative process—from the initial inspiration for a design to how you construct a piece. 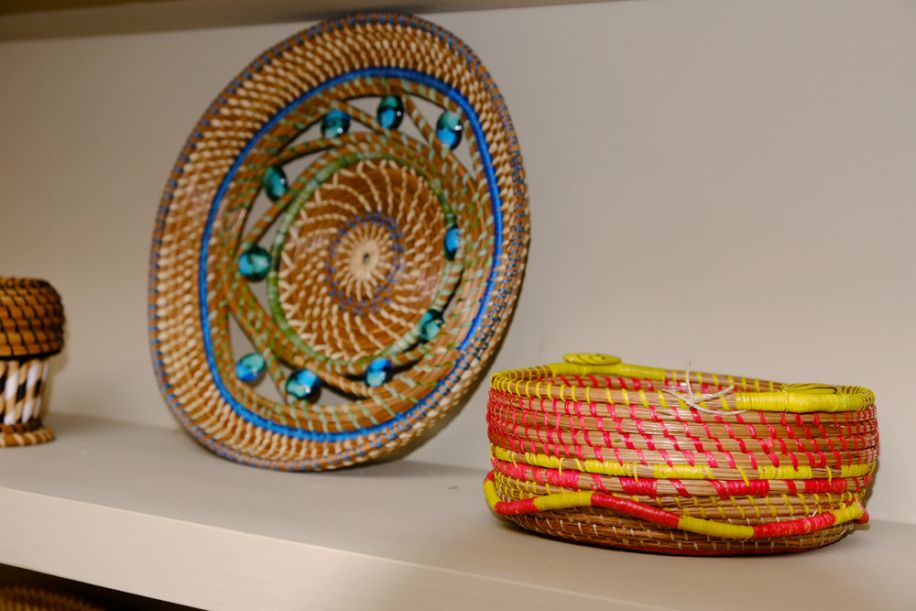 My inspiration comes mostly in that hour when one is not sound asleep but not quite awake yet. One inspiration tends to lead to other inspirations, and the execution of those ideas sometimes results in a slightly different, or even totally different piece, than was intended or envisioned. Generally the designs are influenced by the available materials I wish to introduce, such as drift wood, antlers, twigs, bamboo slices, shells, colored beads and corks. The first step in building a piece is soaking the pine needles, which makes them more pliable. I remove the caps of the pine needles then store them in a dark space until needed. In some cases, I use fabric dye to color the needles for a pattern and added flair. Then begins the very slow process of coiling the pines into the desired shape. Coiling is very different from weaving in which you move over and under. You must have strong hands and patience to hold and work the needles, wrapping them into shape and binding them together with the artificial sinew. 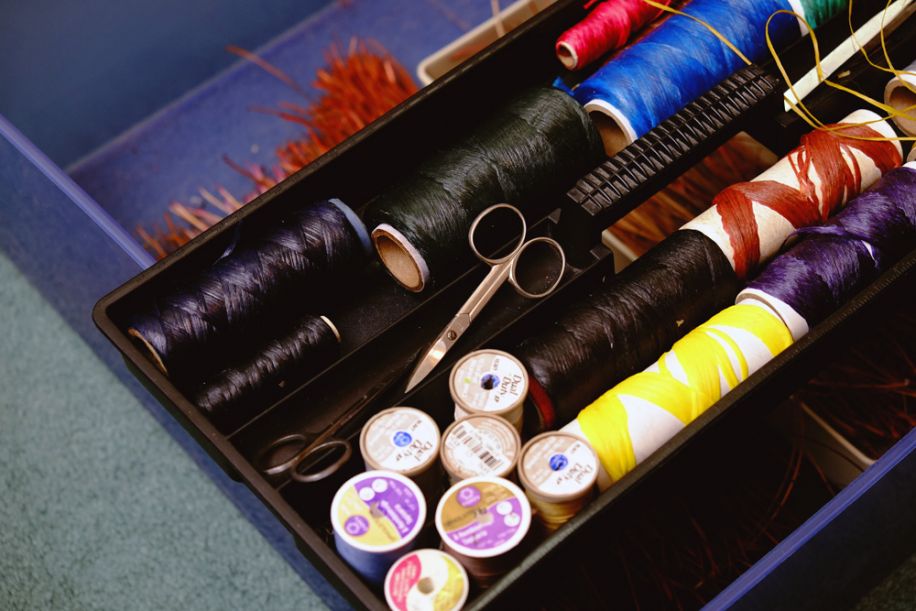