In the aftermath of the 2008 housing market crash, tiny homes built on mobile flatbed trailers shot up in popularity. Consequently, the RV Industry Association reported a spike in sales and soon #vanlife spread across social media as more and more people became disenfranchised with the current housing affordability crisis. As the tiny living architectural and social movement grew in popularity, West Coast cities like Seattle, WA and Eugene, OR created tiny home communities as transitional housing for their homeless populations. Pensacola is currently making strides with the Affordable Housing Task Force concluding its meetings in August to send a final report to the City Council to vote on to create 500 Homes in 5 years. Escambia County has also implemented its Workforce Housing initiative. AMR is set to create the first tiny home community in Pensacola as another avenue for affordable housing. 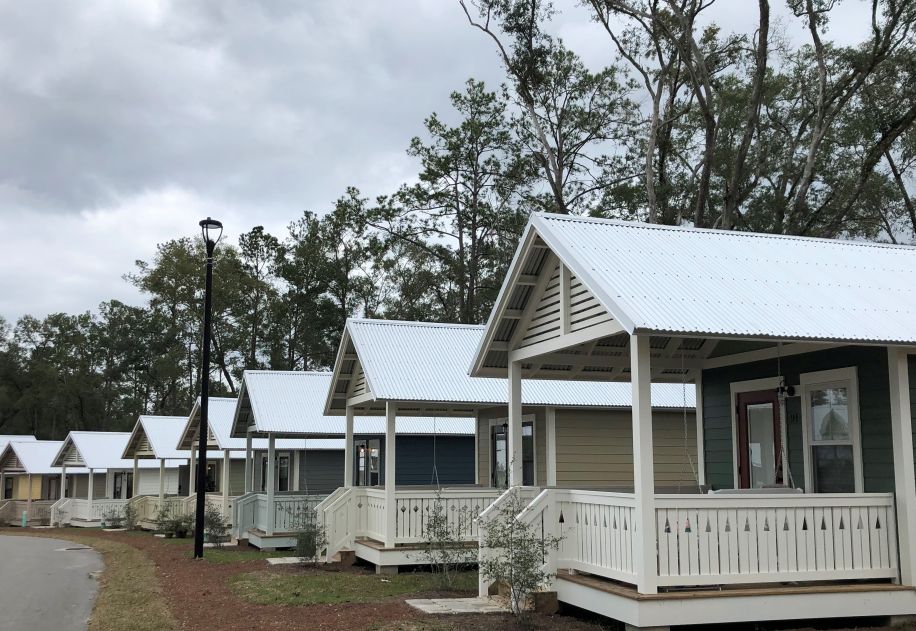 AMR at Pensacola, Inc. is a non-profit organization and state-certified Community Housing Development Organization that has been involved in the development and management of more than 130 affordable homes in Escambia County since 1989. Its main mission is to provide affordable housing for individuals and families with low-to-moderate income by renovating existing buildings to create safe and sustainable housing. “The Phoenix Project,” however, is seeking to create 14 tiny home communities consisting of 12 homes each in a scatter-site model that aims to lessen poverty concentration in neighborhoods by spreading housing throughout the city.

Maggie Davis, a consultant on the project, explained the overarching goal for the project: “Ultimately, AMR is focused on a ‘housing first’ model. So, the goal is to not only get people into low income housing at a fraction of the cost of traditional low-income housing projects but to also help them overcome barriers to become self-sufficient. It is community focused to allow people to have consistent social support. But it doesn’t stop at housing—the tiny home communities are about meeting the unique needs and goals of residents too.” 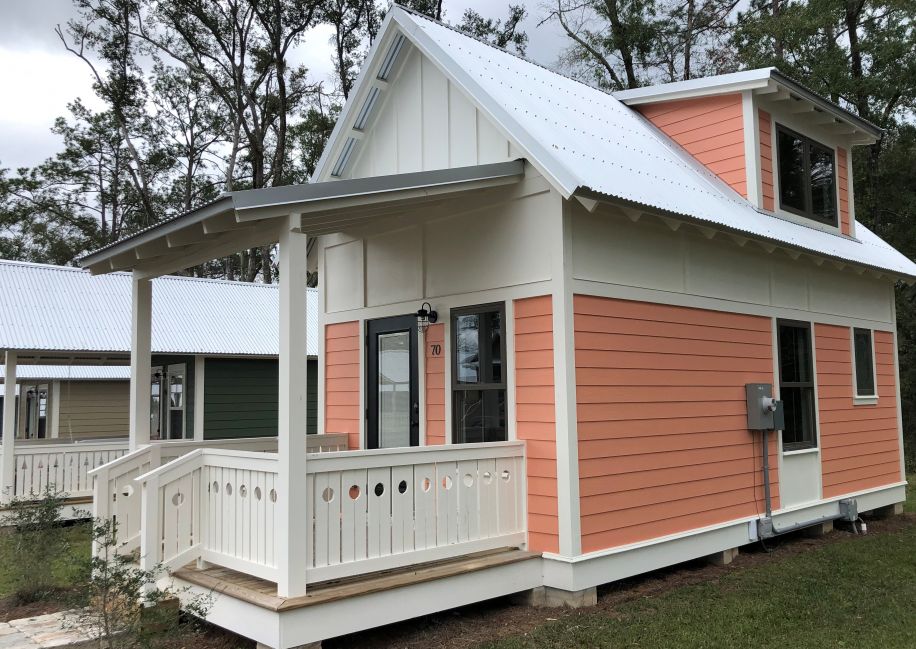 Housing first models prioritize providing temporary or permanent housing and allow people to meet their basic necessities before focusing on career or educational attainment, budgeting or attending to physical or mental health needs. Part of that social support for the project includes a shared on-site community center that will allow AMR to provide shared services and case management to residents such as mental health counselors, addiction counseling, financial literacy services and a variety of educational services. 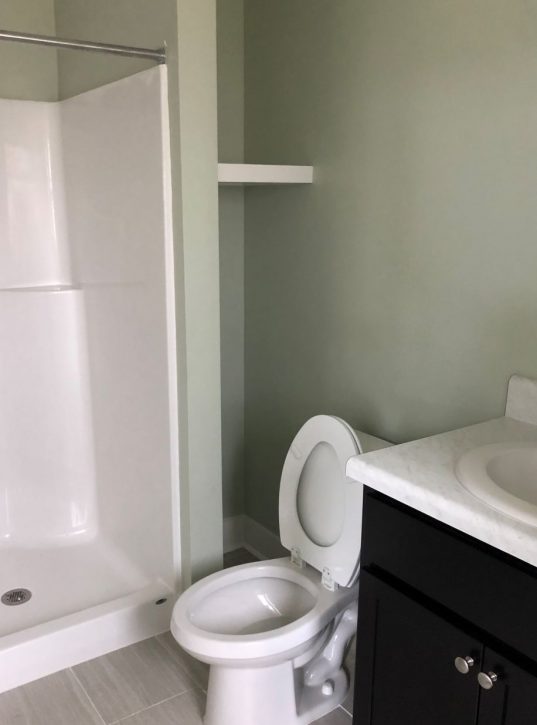 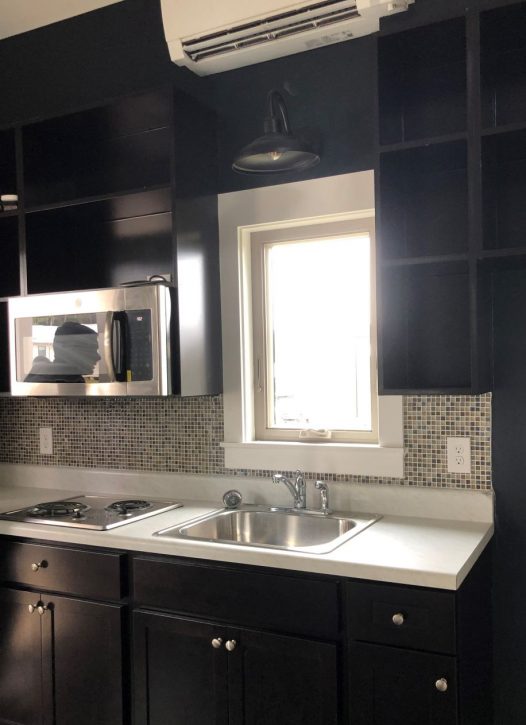 As Davis explained, AMR has researched the project for over a year touring other tiny home communities across the country including Square One Village in Oregon, Veterans Community Project in Missouri and The Dwellings in Tallahassee. AMR is currently working with the architect that designed The Dwellings and H&H Building Group to design the model home.

“The Dwellings have become a key model to duplicate in Escambia County,” Davis said. “The architects have designed four different housing models that AMR will use that range from 220 to 490 square feet and sleep anywhere between one to three individuals. Each tiny house includes a sleeping area, a kitchen area, a living area, storage space and a porch area. There will also be shared common areas like the community center, dining space, community gardens and other outdoor areas. The community center will also feature shared laundry services, bathrooms and two meeting rooms or offices.”

The tiny homes will be built on permanent concrete slabs and set up as rental units with a third-party company processing the applications for income verification and qualifications. Although, Davis explained each tiny home community may vary in target population and community need. Currently, AMR has purchased land in Myrtle Grove at 6518 Lillian Highway and has been donated land at 2011 North T Street as an alternate location to begin building its first pilot community in January 2021. AMR has applied to IMPACT 100 Pensacola Bay Area for a grant to build the first community center and has been announced as a finalist for the 2020 grants announced on October 11.

New regulations from the Florida Building Commission called “Appendix Q” are set to go into effect at the beginning of January 2021 to alleviate strict building codes for tiny home developments. The City of Tallahassee has adopted these regulations and The City of Milton has passed an ordinance to allow for construction within city limits. Current building codes in the Pensacola City Limits do not allow tiny home construction, although AMR has a letter of support from the City of Pensacola in adopting the new regulations.

Mayor Grover Robinson expressed his support in an interview: “The issue has not so much been the city’s willingness to allow tiny homes, it’s been more of a challenge within the Florida building code. Come January 2021, that may no longer be an issue. We are working right now to help get these sites permitted. There isn’t one solution or fix to affordable housing. It’s a series of different things we need to do and different types of housing options. We are very interested in how to create tiny homes in Pensacola.”

As Mayor Robinson explained, the city is currently interested in a variety of housing options to meet recommendations made by the Affordable Housing Task Force and research conducted with the Florida Housing Coalition including homeownership and rental options, single-family detached homes, leveraging property owned by the city, developing infill property and supporting tax credit developments.

“With tiny homes, the idea is to provide a more diverse option for low income housing that provides a greater sense of privacy and pride in one’s community,” Davis explained. To learn more about the project, amratpensacola.squarespace.com