Even after 35 years, 20 albums and a successful children’s music career, John Flansburgh and John Linnell of They Might Be Giants are refusing to slow down. In anticipation of the band’s performance at Vinyl Music Hall on Jan. 28, we had the opportunity to sit down with John Flansburgh and talk about the East Village music scene of the 80s, The Daily Show with Jon Stewart and their upcoming album, “I Like Fun.” For more information and to purchase tickets, visit vinylmusichall.com.

D: Do you remember when you guys first met as teenagers? When you guys met, were you guys like “I’m definitely going to be in an indie rock band with this guy for almost 30 years.”

J: When we met, I don’t think the term punk rock had even been coined. So we certainly weren’t thinking about indie rock. John is a year older than me, and I think we really go to know each other in high school. We both worked on the school paper together. A lot of the ideas that They Might Be Giants embraced came out of conversations at that time.

D: What were the early shows like in 80s or 90s Manhattan? How did that affect what you were doing at the time?

J: To sort of paraphrase Pete Seger talking about The Weavers, “It was quite a time.” In 1984 – 1986, there was a huge explosion in the East Village of all sorts of culture. There was the East Village arts scene – which is like Kenny Scharf and Keith Haring. That was a real youthquake moment for the New York art scene, because up until then the SoHo gallery scene had been very dominant. New York was in this very hard transition from the Ed Koch era of New York being completely broke, and amidst that East Village scene was a very vital and popular nightclub scene – with lots of live acts and lots of activity, none of which was getting noticed in newspapers. It was just this very underground scene, but it was also extremely popular. We had been kicking around New York for a couple of years doing stuff, and then when the East Village exploded, we just happened to be in the right place at the right time.

D: That brings up Dial-A-Song, which is something They Might Be Giants is a little famous for. There were some pretty radical circumstances that caused it: Linnell broke his wrist and your house got robbed. Tell me about that. 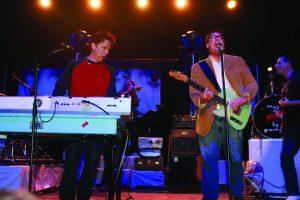 as a bike messenger and had an accident and broke his wrist, so his wrist was in a cast. I moved into this apartment for one day, and unfortunately some of the other occupants in the building were drug dealers, and they weren’t too happy about me being in the place. So when I went off to work they set me up to be robbed, so I basically lost all my worldly positions.

It was a rough patch there for a month or two. But when I got to my new apartment, I bought a phone machine and I was in an apartment by myself – so I could dedicate the phone line to this Dial-A-Song idea, which was something we had been kicking around but kind of seemed like a bad idea. But suddenly when we had no ability to do gigs, it was a way to keep the idea of the band alive. We put up posters in the East Village. It just kind of took off and it had a life of its own because there were a lot of curious people who would call a phone line, but they would never go to a nightclub.

D: After that, you eventually recorded Flood. However, Flood doesn’t sound very different – not in a bad way, it’s just more They Might Be Giants. Why do you think Flood got as big as it did?

J: We had had a lot of success on an indie label beforehand just having our songs played on college radio stations, and we also had the good fortune of having some videos played on MTV. MTV was much less an extension of the charts back then; they didn’t feel obliged to play things in the charts just because they were in the charts. One of the things they wanted to do was play our kind of left-field videos in pretty heavy rotation. It was kind of a tail-wagging-the-dog scenario, as MTV was in many ways very much ahead of the radio, at least as far as our careers were concerned.

D: You have done a lot of music for media. Tell me about doing the theme song for The Daily Show with Jon Stewart.

J: That is one of the better-kept secrets in rock music. Very early on before Jon Stewart was the host, they hired Bob Mould of Husker Du to write a theme – he wrote the melody to Dog on Fire, which is the rock theme part. The producers felt like it didn’t transition the news music part of the opening, which was very much a parody of the NBC Nightly News. So we put together a music package for them, and the people at the Daily Show said “Ah, here’s a rock band that has done these news cues.” We just replaced the guitar driven version of Dog on Fire by Bob Mould with a horn-driven version.

J: Sometimes writing for television is not that different from being a tailor – you’re just trying to make sure it suits the vibe of the thing you’re doing. But the truth is it all happens so fast, I guess that’s the biggest difference. When we’re writing for They Might Be Giants, it’s a very open-ended thing: I might start writing a song and get 90 percent of it done and put it up on the shelf and not revisit it for like two-years. But there have been many things we’ve done for ad agencies where we’ve gotten the call at 11 am and it’s done at 5 pm.

D: After doing all compositional pieces and having about 20 albums, how do you write new things? 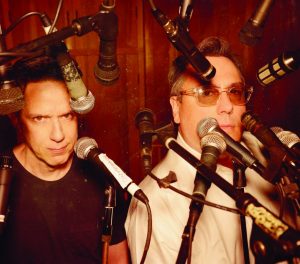 J: That’s a good question. I don’t know if I have a really good answer. We try to up the ante as we go. We’ve come up with a lot of different strategies to create tracks and create sounds, and I don’t think we have a set notion on how to make a song. That’s the thing about writing songs: it seems like an enterprise that has no limits. It’s not hard to keep going, and we’ve also been very lucky that we’ve found the level of success that we can make a living at it and we’ve found an audience for what we do. It seems as strange to me as it probably does to anyone else. I’ve been in this band for 35 years – I thought I’d be in the band for 15 months.

D: In the mid-2000s, you shifted focus and started writing children’s music. What was the decision for you to start making this children’s educational music?

Everything was up in the air – we just left Elektra after 10 years, and were just trying to figure out how we’re going to fit into the whole post-major label deal, which is actually a place where a lot of bands just break up. One of the things that was possible with our new record contract was that we couldn’t do records for outside labels unless it was a children’s album, which was very odd. We somehow had a dispensation for that, so we were free to strike yet another record deal as long as it was for a kid’s album.

All of a sudden not only did we have a regular deal, we also had the opportunity to do a kid’s project. When we started working on “No,” which was our first kid’s album, we thought it would be a one-off, like a Christmas record. John and I thought given the type of band that we are, given the opportunity to write for kids is sort of a privilege, and we wanted to make a record that had the level of imagination that our regular records had but somehow be suitable for kids. We made this record, and it was the exact right time to do it. It went from being a one-off to being a parallel career. Without really having any plan to do it, we just kind of tripped into this very, very successful kind of work.

J: It’s a big set of songs. There’s some range to it. We probably recorded 28 songs in preparation for this record, and pulled 15 to be on this set. There are actually a lot of electronic sounds, even though the first couple of preview tracks don’t spotlight that so much. People who are familiar with the record, I’ve already heard a lot of people say “I really like how lo-fi this album is”, which is a little confusing to me considering it was made with some really amazing musicians in a really fancy studio. I think the reason it might seem lo-fi in 2017 is, in contrast to contemporary music production it probably has more in common with records made in 1978 than records made now.

D: As you guys are beginning to tour off of I Like Fun, what should people expect on this new tour and what should they expect at the Pensacola show?

We’ve taken on a trumpet player, so there’s a whole new kind of sound incorporated into the show, so we’re basically reworking our whole live act. We’ll play a lot of the favorites, but it’s really exciting to play Birdhouse with the trumpet solo in the middle and play Istanbul with the trumpet. It’ll just be a super size show.