Each month, members of the Escambia Bay Homebrewers gather inside neighborhood restaurants, backyards, and American Legion halls to taste the monthly brews, talk fermentation and plan for their annual beer fest.

Small kegs and repurposed bottles can be found lining tables and walls at each meeting, with members milling from one sample to the next–taking in the carbonation, yeast and barely of each sip.

What started as a small gathering among beer loving friends has grown into a club of more than 100 Panhandle residents. The Escambia Bay Homebrewers have been around for 31 years and aren’t showing any signs of slowing down.

The Homebrewers Association was founded in 1985 by Steve Freid and was originally comprised of 20 or so members. Now, 31 years later, the club has more than 100 active members– 200 if you count the spouses who often attend the meetings and parties.

“I was in the Navy and when I got out, I opened a home brew supply shop here,” EBH founder Steve Freid said. “The shop only lasted a year and a half but I was still into brewing and the club just kept going and going.” Freid later went on to become the brewmaster at McGuire’s after his home brew shop closed. 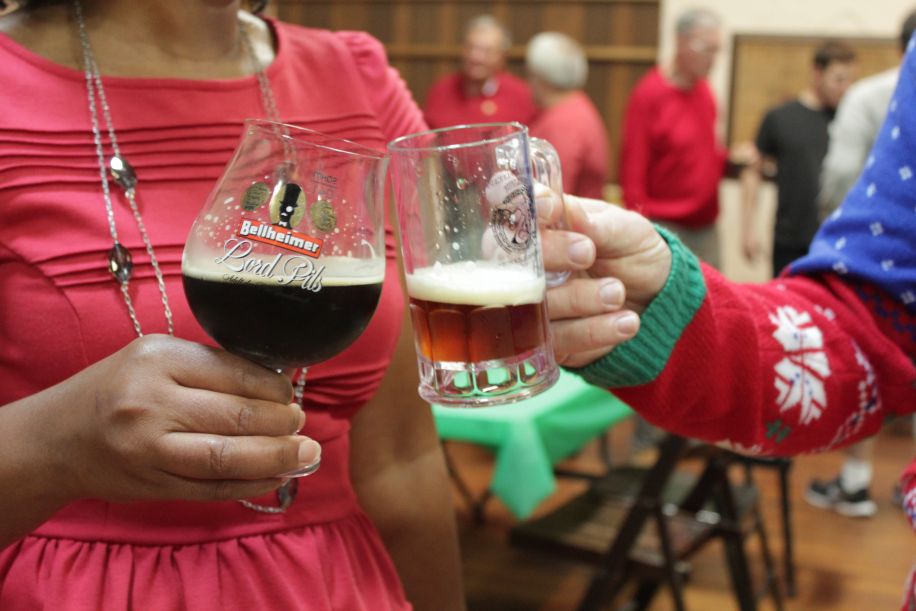 Jim Martin, the EBH treasurer, has been a member since 1988.

He heard about the club from a friend who was a fellow beer lover and after attending one meeting­, Martin was hooked.

“We do three meetings a month-the brewers guild, which is more educational and teaches people how to do things like different brewing methods and so on, and then we have the general meeting once a month, and then one new meeting for our group we call the Winos,” Martin said. “The winos make wines and mead and ciders.”

Martin noted the club was more than just a free sample of beers from homes around town and said it creates a close-knit community of people with a similar hobby and makes a social activity out of something that’s often done alone. And while most of the actual brewing is done in a solitary setting, the monthly meetings offer time to discuss new ways to ferment beers, interesting recipes and tales from fellow members’ trial and error along the way.

Each meeting also sets perimeters for the monthly brewing contest.

“Each month we’ll pick a different style of beer to make, and then at the next meeting the judges pick a winner,” Martin explained. December’s contest featured a hearty stout.

The festival draws thousands of guests, and more than 60 homebrewers and small breweries from the eastern half of the country. Brewers as far as Wisconsin and Tennessee make the trip in order to exchange their concoctions with fellow beverage fans.

“We have people travel in for our beer festival from all over the country–it’s really a fun time for everyone and so many different things to try,” Martin said.

Martin mentioned a few of his favorite brews from over the years and from different festivals, noting a honey lime wheat as one of his most memorable creations. Banana cream ales and pumpkin pie stouts have also been popular with crowds, along with traditional lagers, pilsners, IPAs, porters and Hefeweizens.

Beginning in January, the club will begin making different types of beer and wine in preparation for the fall festival.

“We’re going to make a cherry agave wine this month, for the festival,” Martin said.

Martin said brewing a new beer can take anywhere from two weeks to a month before it’s ready to drink, with wine taking as long as six months.

“If you’re doing a light beer, you can have it ready in as little as 10 days– and some people do it even faster,” he said. “It only takes about three days for the fermenting to stop, but I like to let it sit for awhile so all the yeast settles to the bottom and it becomes clear, without having to add all that other stuff to it. “

For those who have been considering making the jump from consumer to creator, Martin highly encourages attending a meeting.

“You’ll be able to hear what other people have to say about the process, hear about new recipes, take part in the festival, and just do something fun with a good group of people,” he said.