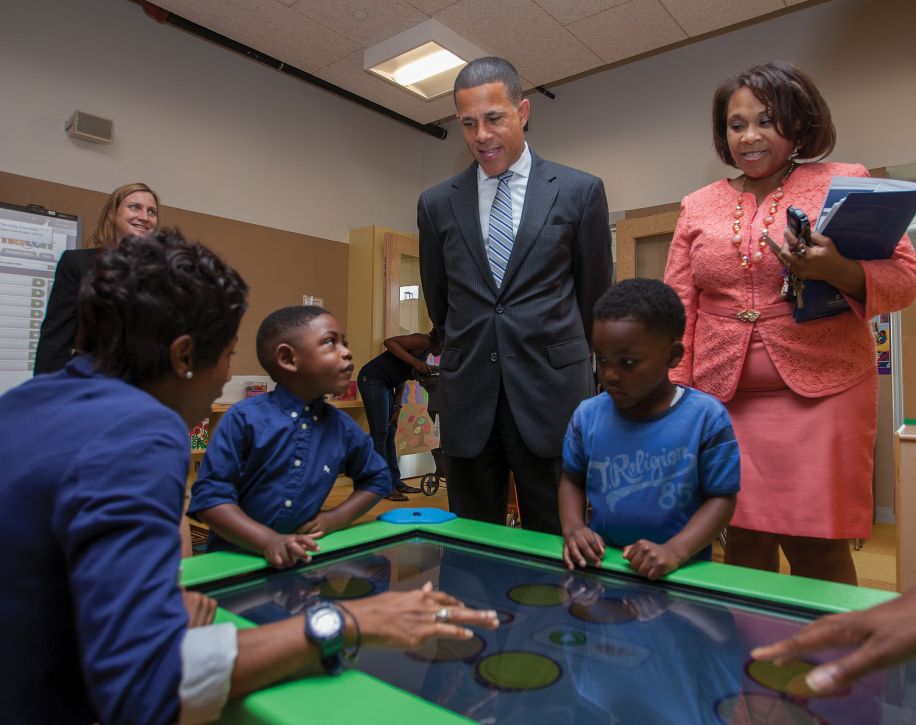 In Florida, we like to tout our record-breaking tourism, speedy development and post-Recession growth. But what about some of the least fortunate among us? As profits rise and populations increase, are we caring for the disadvantaged children in our state who have no agency, a lack of resources, and whose destination may be the same poverty they were born into, unless we intervene?

Research has shown that all children need early and plentiful access to three things—high-quality education, healthcare and insurance, and parental support—in order to be successful later in life and escape the cycle of poverty and destitution into which they were born. Perhaps you’ve heard that one in four kids who do not receive proper preventative care early in life are susceptible to life-threatening diseases later in life, or that less than half of poor children show up to school prepared with the early math and reading skills necessary to learn. Research tells us children of low-income parents hear 30 million fewer words by age 5—when 90 percent of brain development happens—than their better-off peers.

Fortunately, there are advocates on both sides of the aisle, in the halls of Congress and in boardrooms across the state, who are dedicated to reversing this problem. They know that the future of business vibrancy depends on a healthy, well-educated, well-adjusted workforce.

The Children’s Movement of Florida is an early childhood advocacy organization located in south Florida. Launched in 2010, its goal is to ensure that Florida is the best state in the nation for your children. While they are not a service organization, they do help the existing network of non-profits throughout the state receive funding by moving the political needle in their favor.

They work to improve measurements in each of the three categories for childhood success—education, healthcare and parental support.

“A lot of these problems transcend demographics simply because the resources that exist are fragmented and difficult to find,” said Vance Aloupis, CEO of the organization. “The quickest path toward real equity in our state begins with all children having a strong start during the first few years of life.”

For the most recent legislative session, the Children’s Movement was laser-focused on working to pass a bill, HB 5101, which accompanied the state budget. This bill would allow thousands of children of legal immigrants to receive subsidized health insurance through KidCare beginning at birth. While these children have always been technically eligible, language in the program dictated that the state could not provide healthcare to anyone who had been in the country for less than five years.

This particular victory has been four years in the making, as various representatives and senators have sponsored bills in their respective chambers that would lift the waiting period. Ultimately, it was Speaker Steve Crisafulli who called for its passage in January.

Rep. Joe Felix Diaz of Miami had been involved with child welfare for a long time before realizing that this particular initiative was a no-brainer.

“Preventative care is of course much cheaper and this addendum provides for that,” said Rep. Diaz. “We are expecting to cover between 17,000 and 45,000 additional kids for no additional money because we were able to shift dollars from the existing general fund.”

The federal government also agreed to pay 97 percent of the cost of KidCare enrollment, an increase from the 71 percent it had been paying.

While this was a big win for children, the legislature and the Children’s Movement, there remains an even bigger problem. Right now, about 383,000 children are fully eligible for access to the Children’s Health Insurance Program (CHIP), which includes KidCare, and Medicaid, yet are not enrolled simply because they are unaware of the resources available. There’s MediKids for children ages 1 to 4, Medicaid for kids of low-income families and the Children’s Medical Services Network for children with special needs. Another option, Florida Healthy Kids, charges families based on income. For example, most families only pay between $15 and $20 a month for care.

“There are enormous resources available, but far too often it is far too difficult to find this information,” said Aloupis. “We shouldn’t be allowing kids to be using ERs; that’s an expensive form of care that we end up paying for as taxpayers anyway. The information is there, but it’s highly localized.”

That’s where the second leg of the stool, parent support, comes in. The Children’s Movement is also championing an expansion of a round-the-clock parent resource system called Help Me Grow (HMG). The goal of HMG is to promote healthy development for every child in the state. It is a comprehensive and integrated system designed to address the need for early identification of developmental/behavioral concerns, and then link children and families to community-based developmental and behavioral services and support.

As part of HMG, any parent can reach representatives from early learning coalitions, Florida Legal Services, the United Way and more, by simply calling 2-1-1. They also offer web chat versions of their services. In this way, Aloupis said, parents with limited resources can find out what is out there to help them raise their children in the best, most effective way possible.

The service also offers referrals with advocacy and follow-up, screenings for health and development, enrollment in community programs, and networking opportunities for families, service providers and community partners.

The United Way of Escambia County facilitates the local branch of the 2-1-1 program, and, also offers information on emergency food and shelter, child care services, help for people with disabilities, counseling, mental health services and more.

The last crucial antecedent of a positive childhood experience is early, high-quality education. The Children’s Movement is a big believer in Voluntary Pre-K, a program to offer all four-year-olds free prekindergarten regardless of family income. VPK prepares early learners for success in kindergarten and beyond.

While Florida was the first state in the nation to provide pre-K access, funding for the program has been woefully inadequate. There is a waiting list  of about 50,000 for subsidized school-readiness programs.

“When the program was first instituted, there was $2,500 allotted for each child,” said Aloupis. “A lot of experts say that’s not enough to ensure high quality. We’re now in the 11th year of the program, and we’re actually spending $63 less per child, despite an increased cost of living. Compare that with DC where they spend $15,000 per child.”

It would require about $250 million to get the program up to snuff, compared to the $20 billion Florida spends on education out of the $82.3 billion budget.

Aloupis is hesitant to just throw money at the problem, though. He says that accountability and comprehensive assessment are far better metrics for success than how much money is spent.

“How do these schools rate on school-readiness and how do students perform on the larger continuum of eventual higher education?” asked Aloupis.

Florida requires that 70 percent of children who attend VPK be ready for kindergarten in order to receive public money.

“Parents need to research these organizations,” said Aloupis. “They shouldn’t just be a babysitting program; they need to teach children effectively.”

There is clear research indicating that children who are born into poverty are on a different trajectory than their better-off counterparts. Disparities can begin to manifest as early as 18 months. But, education is the great equalizer. That is why, according to Aloupis, we must reconstruct how we view education.

“We need to draw a direct line between investments and ROI later on in high school and college,” said Aloupis.

Not one to wait around, private industry is starting to take matters into their own hands. Companies like Gulf Power are huge proponents of workforce readiness and early childhood education.

Jennifer Grove is the community development manager for Gulf Power and is part of their initiative to locate and nurture high-quality students.

“It started when we discovered that we were having a hard time getting folks to hit the ground running in some of our high-skill positions,” said Grove. “We started looking at our student base and tried to determine when kids decide to get into science, engineering and technology. We discovered it was very early on, and that’s when we decided to be proactive about cradle-to-career programs.”

Through ECARE (Every Child A Reader in Escambia), Gulf Power partnered with other organizations in the area to help improve childhood literacy. This is done through ideas, like Reading Pals, in which professionals in the community sign up for one hour a week to read to preschool children in the area.

Grove also serves on the Florida Chamber of Commerce, helping with their Six Pillars program. One of those pillars is talent and education, and the Chamber has already added early learning as a key component of the talent pipeline.

“We do that by sharing consistent messaging with our business audience,” said Grove. “We tell them why it matters to focus on early learning and let them know how their business can get involved, whether through tangible counseling or through partnerships, programs and funding—anything to move the needle on early learning outcomes.”

Breaking the cycle of generational poverty and moving kids into high-skill, high-wage jobs requires parental and professional support. One of the greatest investments any individual or business can make, in fact, is early learning. It is estimated that one dollar spent on a child between the ages of 1 and 4 returns an average of seven dollars later in life.

“People understand the importance of family and economic health, but what they don’t realize is how closely education is tied to that,” said Grove. “Everything we know from brain science to economic research tells us that there is a direct connection between not being ready for kindergarten and dropping out of high school, only to be dependent on social systems later in life. It’s really about a culture change that starts with the parents and children before kindergarten.”

Grove recommends that parents go to educational facilities and engage one-on-one with teachers. Make sure the schools provide a vocabulary-rich environment. Tune in to your kids and talk to them, even if they cannot yet talk or understand. There is a direct connection, Grove says, between the language arts and STEM.

“In order to remain competitive and viable, we have to accelerate our educational standards and take proactive measures as a community, together, using all sectors to improve,” said Aloupis. “With that kind of understand, plus a network of parental resources and robust healthcare, we will have less work to do on the social safety net and incarceration side.”