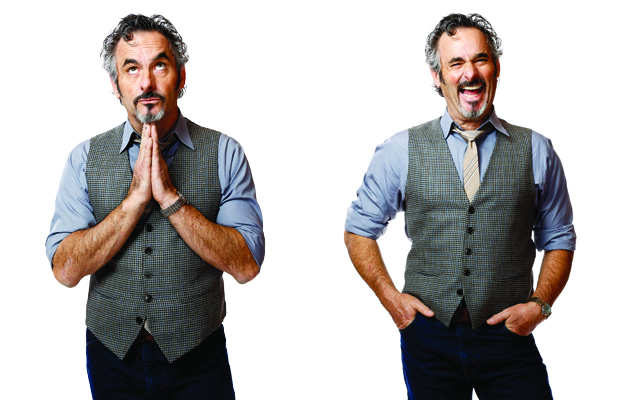 You might not know David Feherty’s face, but you can probably recognize his voice. Feherty is the wisecracking golf analyst and television host with the thick Irish accent on NBC Sports and the Golf Channel whose irreverent personality and wit have entertained golf fans for more than 20 years since he retired from professional play.

When he’s not providing course commentary at major golf tournaments or filming episodes of his show Feherty, the 61-year-old Feherty hits the road to perform a show that’s a mix of stand-up comedy and storytelling in theaters across the country.

Feherty will bring his “Feherty Off Tour – Wandering Around On His Own” tour to Pensacola’s Saenger Theatre on September 19. Feherty spoke with Downtown Crowd ahead the tour about his inability to watch himself on TV, his struggles with alcoholism and his ever-present stuffed chicken, Frank.

How would you describe the show?

DF: It’s really a journey through my life with a bunch of fart jokes. I actually tell jokes which is one of the things you seldom see or hear these days. It’s almost all situational or observational humor. People don’t really tell jokes anymore. My father was a great storyteller and his friends as well, so it’s really just the atmosphere I grew up in. A lot of these jokes are old jokes, but people here haven’t heard them before and if I don’t tell them they’ll die.

It’s kind of like some of the golf stories I tell about men like Palmer and Ken Venturri, if I don’t tell these stories they’re going to go away, they’ll go into the ether. I would say about half the show is golf related, and half isn’t. So you don’t have to be a golfer to come and enjoy the show. There’s plenty for everybody.

Do you feel like you’re able to let loose a little more in these theater settings than you are on TV?

That’s one of the things I set out to do. At the beginning of the show I explain, tonight I’m a comic not a sports commentator, because I’ll say things that would get my ass fired in a heartbeat if I were on television. You know comedians can kind of do what they want they can make fun of people, where commentators can’t, so I kind of have to divide my life into compartments when it comes to my career if I want to continue to have one.

I hear you don’t watch yourself on any of the things that you do. Is that still true?

Yeah, it is. It creeps me out. I have to watch a certain amount in the edit room and that’s not for me. I can’t take it.

I understand you have a taxidermied chicken on stage in the show. What can you tell me about Frank the chicken?

That’s a good question. I don’t even know where Frank came from. He just showed up on the set one day. I think he came from a pawn shop somewhere.

Not to spoil the show, but can you give me an example of a story you might tell?

I tell a lot of Irish jokes. As a former Irish person, I think we’re probably the last ethnic group on the face of the planet that you can safely insult and get away with it. You can’t offend a real Irishman.

Speaking of your citizenship, I understand you became American citizen. Why was that important to you?

I grew up in an urban warfare environment in Northen Ireland, and when 9/11 happened I had been in the country for a number of years and had already fallen in love with it. I went to Iraq with the USO and I was blown away by the compassion that our troops have not just for each other, but for the people in the country in which they’re fighting and the restraint they show on a daily basis. So when I came home I knew I had to be an American. I wanted to be able to call them my troops.

Do you touch on your alcoholism at all in the show?

I do, I more than touch on it. It’s been a huge part of my life. You have to maintain a sense of humor about that shit particularly, if you’re going to have any kind of a life. So that is a big part of it.

Do you find it cathartic?

Yeah, you know the best part of being something of a D-list celebrity or whatever is that a lot of people will come up to me afterwards and say you were an inspiration to me or you’re the reason I’m sober. That’s therapeutic for me. The thought that this might be useful to someone else is of tremendous comfort to me.