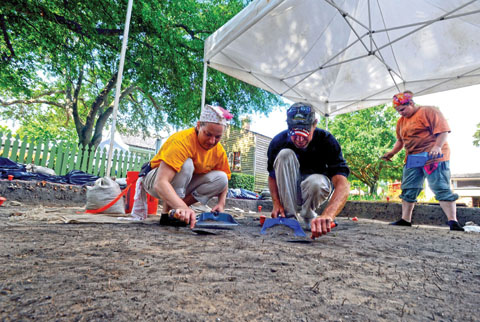 It is no secret that Pensacola is rooted in a rich history dating back to the 19th century, when the city became one of the first U.S. Settlements. The Archaeology Institute at the University of West Florida has been exploring the Native American, British, and Spanish origins of our Pensacola since the 1980s. The Archaeology Institute is part of the Division of Archaeology and Anthropology and is dedicated to education and research of prehistoric and historic archaeological sites in Northwest Florida.

Last October, UWF’s archaeology program excavated the archaeological remains of the Luna settlement in a residential area of downtown Pensacola. The site proved to be a settlement by Tristán de Luna y Arellano from 1559 to 1561, where the Spanish settled after their ships were sunk by a hurricane.

Several years ago, two of the wrecked ships related to the Luna Expedition were discovered in Pensacola Bay. About one-third of the first ship has been excavated. “Archaeologists tend to not try and excavate all of anything,” said Dr. Elizabeth D. Benchley, director of the Institute. “They want to leave part of it so future researchers can come back to it when there’s better techniques and new questions.” Researchers hope to find more of the shipwrecks.

Over the summer, undergraduate field school students began working to uncover the second Luna ship. With the help of the Florida Division of Historical Resources Special Category Grant, the marine team continues to work on the exploration of the wreckage.

In addition to the exploration of sites related to the Luna Expedition, the Institute has been working to restore and preserve historic cemeteries in downtown Pensacola, with a primary focus on St. Michael’s Cemetery located on North Alcaniz. St. Michael’s is a colonial-era cemetery that now serves as an outdoor museum of Pensacola’s history.

The Institute partnered with the St. Michael’s Cemetery Foundation of Pensacola, Inc. to manicure the property and to complete a botanical survey of what grows on the site. “You have an opportunity to really look at what may have been growing on the site when Europeans arrived,” said Margo S. Stringfield principal investigator on the St. Michael’s Cemetery restoration project.

Stringfield invites everyone to enjoy the beauty of St. Michael’s. The cemetery is a part of the bird sanctuary for downtown Pensacola and the migrating butterflies have had a strong presence in the eight-acre cemetery.

The team also created the Geographic Information Systems (GIS), an interactive map of St. Michael’s and allows people to search for gravesites by name and date, in a similar way to Google Earth. Each entry is accompanied by a brief history about who is buried there.

“Recently we’ve started working on historic Native American cemeteries, which are West of Downtown off of A Street.” Dr. Benchley.

If you are interested in volunteering to help with excavation or in the lab with the Pensacola Archaeological Society, contact the Archaeology Institute at 850.474.3015.