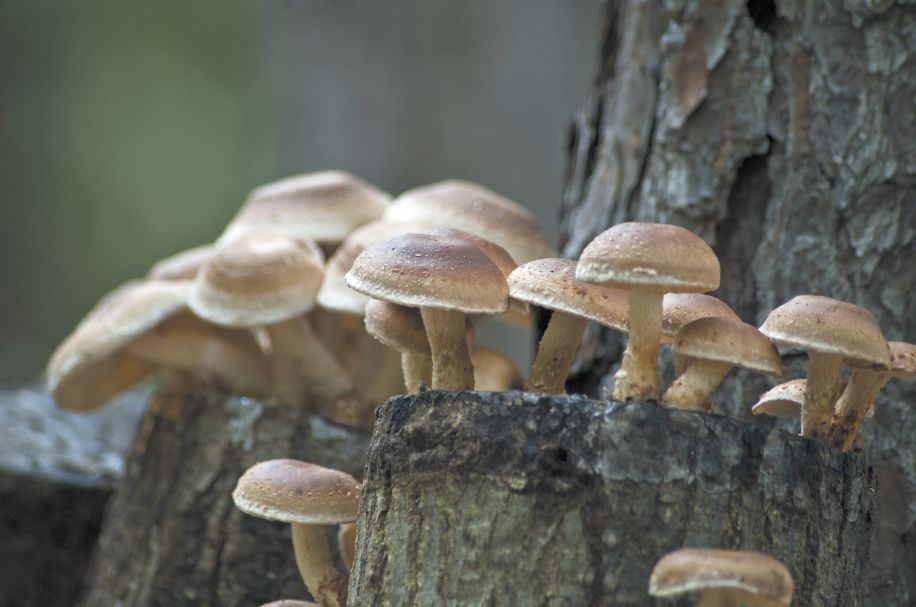 Considered a symbol of longevity in Asia for thousands of years, the shiitake mushroom is one of the most versatile and flavorful commonly cultivated mushrooms available. Typically grown in inoculated logs, the rich flavor and hearty texture of shiitaké make them a favorite among chefs and foodies. The delicious mushrooms can command a high retail price, however, which the average consumer cannot always bear. Fortunately, shiitake lovers can grow their own backyard ‘shrooms relatively easily and enjoy the fungi of their harvests indefinitely. Depending on the spawn type, log size and moisture/weather conditions, home growers can expect to harvest one to three pounds of mushrooms per log every eight to ten weeks. We talked with Nick Phoenix of Coldwater Gardens about their enviable mushroom production and got some tips for the home grower as well.

“It starts with tree selection,” says Nick. “We look for primarily oak, but any hardwood tree will work. We make our selections based on road management and forest management in order to do well by the ecosystem. In the winter, when the trees drop their leaves, that indicates that they are storing their sugars and carbohydrates. We will fell the tree and let it sit for one month with the branches and then we cut it into our 36 inch logs and remove the branches. Next, we immediately inoculate by drilling holes into the log, filling it with sawdust spawn and then wax over the holes and on the end of the logs to protect the log from invasive fungus, bugs and weather. It sits under cover in 100 percent shade with a misting system for about 10 months of incubation. After that, we stack them vertically and soak them in water for 24 to 48 hours. In about seven days we have edible mushrooms.”

Although Coldwater’s mushroom production is larger in scale (roughly 500 logs), it’s relatively easy for a home grower to use the same process on a smaller scale. Nick recommends home gardeners have eight logs, soaking one per week for a continuous supply of mushrooms. The season here runs roughly from early October to early June. They will produce in mild winters, but not in freezing weather. After harvest, you wait eight to ten weeks and then soak it again. For Coldwater Gardens’ 36 inch logs, each log produces between one to three pounds per post soaking harvest. Be sure to keep them moist with a mister or garden sprinkler. Logs require about 40 percent internal moisture content during resting and about 60 percent during fruiting. Wood moisture meters are available online.

Coldwater Gardens does offer private classes on shiitaké inoculation and cultivation and Nick suggests checking out Field and Forest products online for all of your supplies (fieldforest.net). Although there are thousands of strains of shiitaké, Coldwater Gardens uses the West Wind variety and they have found that it does very well in the Northwest Florida climate. Although there are a few different options for the spawn, Nick recommends the sawdust variety for its affordability and ease of use. Be sure to store in the refrigerator until ready to inoculate. You want your logs to be fairly fresh, so don’t let them sit too long before inoculating. Kits are also available online for first timers.

Most mushroom aficionados recommend not washing mushrooms as they tend to soak up water and become slimy. Nick recommends holding the mushroom by the base of the stem and tapping the gills with your palm. That knocks out most of the debris. Mushroom brushes are also available. Pat them dry if they are moist and store them in a paper bag in the produce drawer of your fridge for one to two weeks. You can also dehydrate in the oven or a dehydrator.

Shiitaké’s health benefits are far reaching. Long considered a medicinal mushroom due its use in oriental medicine as a concentrated extract or medicinal powder, shiitakés in their culinary uses are high in B vitamins and are good sources of iron, selenium and copper, zinc, manganese, vitamin D2 and dietary fiber. Studies also show that shiitakés are helpful in fighting cardiovascular disease and in supporting the immune system. Be sure to cook them lightly as overcooking can diminish their nutrient content and flavor.

Shiitakés have a rich, smoky, woodsy, flavor and a dense, meaty texture. They are often mentioned when speaking about umami, the fifth basic taste after sweet, salty, bitter and sour.  Derived from the Japanese word umai, meaning “delicious,” umami (pronounced oo-MAH-mee) is described as a savory, brothy, rich or meaty taste that provides a satisfying sense of deep, complete flavor.