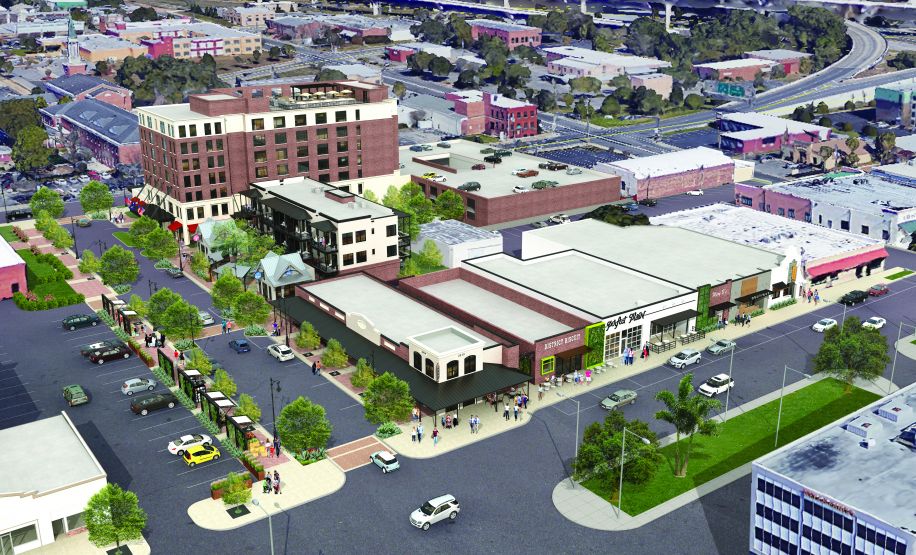 With work set to begin on the first phase of what promises to be a transformative project in the heart of downtown Pensacola, the project’s planners are drawing from the past for inspiration.

Local developer Chad Henderson is driving the next phase of downtown Pensacola’s ongoing renaissance with plans to transform two blocks of Garden Street into a destination lifestyle district featuring shops, restaurants and a hotel. Henderson’s East Garden District plan was unveiled in May and has been in the planning stages ever since.

Now, work is set to begin. The first sign of progress will be the demolition of the rear half of the former Reynold’s Music building at the corner of Garden and Jefferson Streets to make way for a place-making restaurant. More critical, though, will be the work that commences next to reimagine Jefferson Street as a pedestrian-friendly streetscape from the drab thoroughfare that it is today.

At every step in the design process, Henderson has looked to the past for inspiration. The East Garden District takes its name from the historic streetscape laid out by British officer and engineer Elias Dunford, whose 18th century grid plan for the city’s streets established many of our modern roadways. And like Dunford’s street plan, Henderson’s vision for the East Garden District is one of walkability, community and connectivity.

“We’ve seen that the past several decades has mostly been made up of suburban sprawl and what we would frame as vehicular-centric development,” said Henderson. “Now in many areas and markets we’re seeing a movement of development back to the core and this is more around people-oriented development that would create a sense of vibrancy and human connectivity and walkability. So if you think about the spirit in which Elias Dunford laid out Pensacola to make it better, we want to continue that same mindset of connectivity and walkability.”

As part of that connectivity plan, the East Garden District will see a “road diet” on Jefferson Street. Landscape architect Steve Dana is working with Henderson on the project and said he expects to see a 30 percent reduction in total surface area of the road to make way for wider sidewalks. Dana also said 20 to 30 trees will be plated along Jefferson street, creating a canopy to provide shade and attenuate stormwater runoff. The vision will be similar to that of the streetscape between Southtowne and the Bear Levin Studer YMCA a few blocks to the south, Dana said. With the addition of pervious pavers in the parking lanes, Dana said he hopes the Jeffeson Street portion of the East Garden District can serve as a model for green development in Pensacola.

“Every study we’ve done says you need to be putting in green infrastructure and we haven’t done it yet,” said Dana. “We want this to be a pilot project for the city and community to show the benefits of it so hopefully it can become the new norm.”

Henderson is a Pensacola native whose healthcare real estate business regularly takes him all over the country. His vision for the East Garden District is based partly on other urban living districts that he’s seen in other places, like The Gulch in Nashville. Henderson said he’s seen how cities have become more connected, livable and people-centric, but often lack the kind of origin stories that create an authentic sense of place. That’s where Pensacola has an edge, he said.

“This is what sets Pensacola apart is the ability to have these stories,” he said. “There are a lot of developments that are occurring that don’t really have the opportunity to draw back to the character and the soul of an old city, and we have that opportunity. So we should be thankful that we have all these old storylines to play off of, because that’s really what creates the character and soul of a place. That’s what I’m most excited about.”

The East Garden District is bounded by Palafox, Chase, Tarragona and Garden streets and spans Jefferson Street. Henderson estimates the project will cost about $50 million.