The making of a new downtown district calls for a combination of the past and the future as well as local and national influence. The history behind the East Garden District (EGD) has been the foundation for the project since Chad Henderson launched it in 2019. EGD was inspired by Elias Durnford, who created Pensacola’s city plan in 1764. Durnford’s vision for the district featured the garden lots that led to the name of the district. From the beginning, it was imperative to include the influence of local talent such as Dal Sal Architects, David Fitzpatrick Civil Engineering and many more. These influences kept the district focused on the local community’s needs. Now, EGD is striving for a fresh take with national talent. EGD’s newest architect is Milwaukee, Wisconsin’s Kahler Slater.

“I think drawing from Kahler Slater’s experience of hospitality and activating rooftops was something that was important to us, and certainly, working with someone local like Dal Sal has been important for casting the vision of what East Garden District could be,” Henderson said. “So we think a great approach is to have a bit of both. Somebody that has a great creative mindset and a great sense of the local environment, but also somebody that comes from outside to bring a fresh set of eyes to Pensacola.”

Kahler Slater’s architects use a performance-based design process to create restaurants, hotels, medical centers, corporate headquarters and everything in between. Henderson first worked with Kahler Slater during a project with Catalyst Healthcare Real Estate, which has an office in Milwaukee. After staying at a hotel designed by Kahler Slater, Kimpton Journeyman Hotel, Henderson was completely blown away by the company’s skill, so he invited Kahler Slater to submit a proposal for the EGD project. Henderson named Kahler Slater the architect for EGD’s hotel, mixed-use building and parking deck.

“At first, we were concerned that we wouldn’t get it. Anytime that we are not the local, we have those concerns. We built a great relationship with Chad and we had an emerging relationship with Tosh,” Marshall Butler of Kahler Salter said. “So we pursued it because we thought it was such a good fit for Kaler Slater, and we thought it was right in the middle of our strike zone from a value proposition.”

Unfortunately, COVID-19 has caused progress on the project to slow. However, Kahler Slater is using this time to think critically about how this hotel, the anchor of the project, will fit into the downtown community.

“Chad is not just passionate about that hotel. He’s passionate about Pensacola and bringing that area up by adding a hotel, which drives jobs and businesses,” Butler said. “It just elevates that district even further. We want to take into account what does the local flavor feel like? What does the neighborhood feel like? It has to fit in contextually. It can’t be just a cut and paste of a Milwaukee hotel.”

Although Henderson and his team are not ready to announce the brand or soft flag of the hotel, Henderson did share more details about their plan for the hotel. The hotel, which will be at the corner of Chase and Jefferson Street, will have nine floors, approximately 160-170 rooms, event space, a rooftop terrace and a very inviting lobby with food and beverages available for tourists and locals to enjoy.

Kahler Salter is also the architect for the parking deck, which will be located behind the hotel on Chase Street. EGD is working with the architect and the City to assess the parking needs for future buildings and current buildings in the district, such as IRIS, Pensacola News Journal and the Rhodes Building. The assessment will determine the peak hours for each building to determine how large the parking deck needs to be.

Tosh Belsinger, founder of Gulf Blue Group, a real estate and consulting company, has been aiding Henderson with developing and designing the project. Belsinger explained that EGD has used this lull in the hospitality industry to strategize and work with the City of Pensacola on the road diet project. 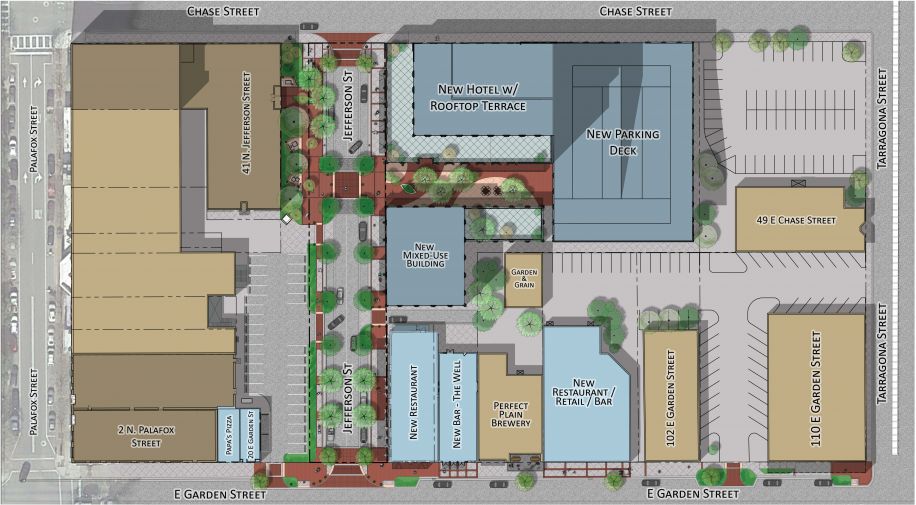 “It’s important to recognize that COVID has impacted the hospitality world significantly, but we’re excited that we have a lot of work to do and progress to make with the road diet project and the existing buildings on Garden Street,” Belsinger said.

The street diet, which narrows the street and expands the sidewalks, will be on Jefferson Street between Garden and Chase streets. This diet will increase the walkability and safety of EGD for visitors. Studer Properties completed a similar project around Southtowne and the YMCA, located on Intendencia between Tarragona and Jefferson.

For the past year, Belsinger and Henderson have been working with the City of Pensacola and the Community Redevelopment Agency on the street diet. The CRA, through a refinance of existing bonds, unlocked capital for downtown projects within its district, so the CRA agreed to fund $1,375,000 of the project. The Jefferson Street road diet project is estimated at $2.1 million. EGD is in the process of drafting an agreement with the City and the CRA.

“We’re very excited to see the city invest alongside our project,” Belsinger said. “We think that this project is essential to the East Garden District. It’s going to be such a great transformation of that street, and it will set the tone.”

Perhaps one of the most interesting factors of this project is how quickly EGD will be able to return the city’s investment. EGD is projecting about $2.8 million in new property tax, sales tax and bed tax per year. Within the first year of EGD being fully built out, it should be able to return the city’s investment. Belsinger explained that over the next decade, as that tax base increases, EGD can use the new tax revenue to seed other growth projects within the city limits.

The street diet project doesn’t stop there. EGD is using this reconstruction as an opportunity to enhance the overall appearance of the district. To draw attention to the district’s landscape and buildings, they will be moving power poles and overhead utility lines underground. Many cities across the state are moving utilities underground to prevent damage from storms like Hurricane Sally, which left many people downtown without power for several days. Belsinger explained that EGD is working closely with Gulf Power to implement this aspect into downtown and they are looking at the possibility of solar power, too.

“This is all part of creating an inviting experience,” Henderson said. “Infrastructure, if not appropriately designed and implemented, can be an eyesore. Taking time to work on the front end is incredibly important for creating a sense of place in the East Garden District.”

Creating a sense of place is crucial for EGD. One way it’s achieving that is by incorporating businesses the local community adores. DC Reeves, the owner of Perfect Plain, is currently in the process of making tenant improvements to his upscale brewery, The Well. The Well is EGD’s first business and will be opening soon next door to Perfect Plain. Pensacola Beach’s Papa’s Pizza will also be joining the district. This will be the restaurant’s first downtown location.

“We are very excited to help bring Papa’s Pizza brand downtown. Of course, DC has done such a wonderful job with Perfect Plain, so to be able to work with him and create a place for a sister brand has been special,” Henderson said. “I think both of those brands really link us locally. We feel as though that would be a representation of great operators in our community and help bring more people to this side of downtown.”

If you are interested in learning more about the EGD project, visit eastgardendistrict.com.