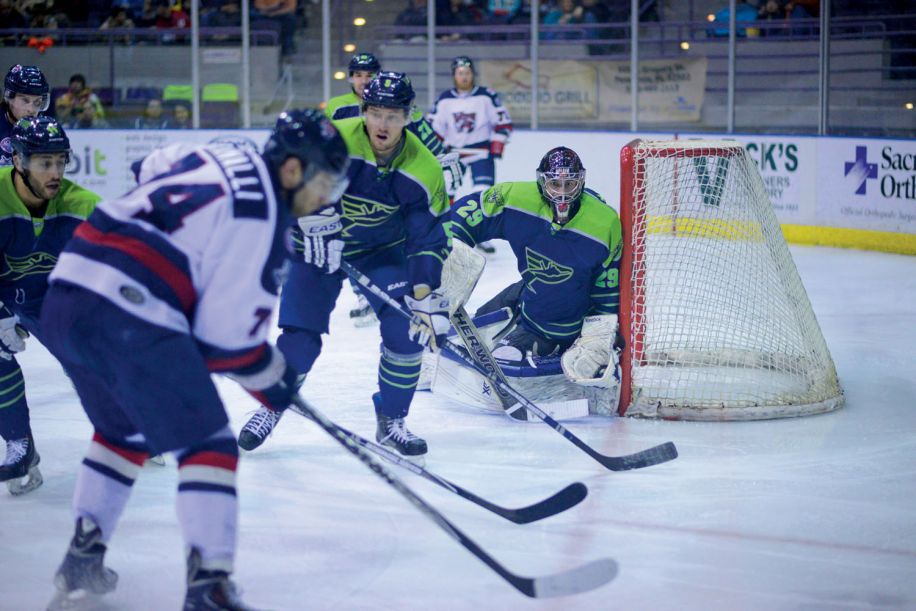 At 6-foot-9-inches tall, Minnesotan John McClean of the Pensacola Ice Flyers is a force to be reckoned with, and, as one of the team’s goalies for the second year in a row, no less could be expected from the returning player. However, John will be the first to tell you his success shouldn’t be attributed to his height alone; in fact, he’s undergone rigorous training to reach the level of proficiency and confidence he has today. Downtown Crowd caught up with the returning Ice Flyer to discuss highlights from his most recent year with the team and how he is preparing for the upcoming 2016 to 2017 season that’s kicking off at Pensacola Bay Center on Oct. 21.

How does height factor into your position as a goalie? Pros and cons?

I like that question, because it definitely has its pros and cons. For me, height was the hardest part of me making it. I am the tallest professional goalie in the world. When I was younger and I wasn’t very tall, I could mimic goalies close to my height in the NHL. But when I grew so much, it was negative to watch NHL goalies because there was no one close to my size. Things I struggled with was finding a coach who knew how to work with me and understand my size, since the average goalie is 6’2”. Also, no one knew how to make equipment to fit me. But, one of the biggest cons of my size is that if you over move, the amount of space left open is a lot bigger than a goalie who is smaller. It’s been a long, long process, but I’ve learned how to use size to my advantage—moving as little as possible while still being athletic and ready for anything coming at you. On the flip side, one of my biggest advantages is my wingspan of 7’2”. When there is a hole from moving out of position, I can make up for that with my reach and it’s hard for an opponent to get around me.

What was your favorite Theme Night from last year and why?

The one that really sticks out was the Top Gun Theme Night, which also fell on Military Appreciation Night. I remember standing on the goal line next to a giant American flag and Air Force officers. It’s something I’ll never forget, because my grandpa served in the military, too. He passed away last December, so it was really special to be part of a event that honored our military.

For you, what was one of the highlights of last season?

To be honest, the biggest highlight was winning the championship and taking home the President’s Cup. Many players have careers spanning 15 years playing for a professional league and, while they may all have really good careers, in retirement speeches they go through everything they achieved except winning the championship. To be part of winning in the first season I started with the Ice Flyers, I can’t explain how amazing that was. Plus, I can’t say enough about our fans in Pensacola—they really are the best in the league.

How are you preparing for the upcoming season?

I’ve never felt so confident going into a season and there’s a couple reasons for that: first, after every season, you’ll be told to take time off and do something to give your body a break and mentally get away from the game. This year, I was invited to do Life’s a Dance for Covenant Care, which gave me a chance to give back to the community while taking time away from hockey, so when all was said and done I was ready and driven to get back in the game. I came back home to Minnesota in the last week of June; since then, I’ve trained every day with some elite players like my workout partner, Troy Grossman, who is the goalie for San Jose Sharks. Greg Harris, owner of the Ice Flyers, also helped me financially with getting equipment sized for me and that’s been one of the biggest blessings. He also helped with Envision Eye Training, something that NHL goalies, NFL quarterbacks, and major league pitchers go through to read depth changes in a fast-moving object, hone peripheral vision, and overall improve sight beyond achieving 20/20 vision. I also went through goalie coaching with Jeff Battah of Pro Goal Development in Vancouver.