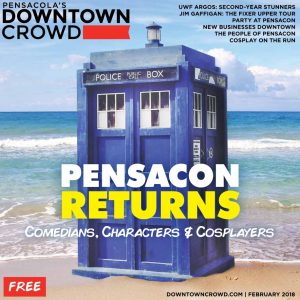 How’s about that winter, eh? What was it, a whole three weeks this time? Hey, that’s more than we usually get.

And you know what? Y’all can keep it. No more dreaming of a white Christmas for this Florida boy. Fact of the matter is, the cold is miserable. I can’t even fathom the kind of temperatures our friends to north were made to endure.

I know I’m not the only one who had to bust out the wooden spatula from the kitchen to scrape the ice off my windshield. Maybe it wasn’t the Icepocalypse of 2014 all over again, but I for one am philosophically opposed to any thermometer reading below 40.

What I’m saying is, be thankful for what you’ve got. Sure, when summer comes around and we’re getting second-degree burns from our car seats, we’ll complain then too. But I think you’ll agree that our hot summers are well worth not having to shovel snow. No, thank you.

Suffice to say, I enjoy living in Pensacola. And not just for the mild winters, either. The food, the water, the people, the small-but-resilient hip scene and, of course the beaches. I’m proud to tell people that I was born and raised in here. Yet, when I was growing up, most everybody I knew wanted to move away. Many of them did. Some have stayed away. Many came back.

Some move because they want the hustle and bustle, some for the mountains, and most for school and work. I believe, for some people, it takes moving away to appreciate what we have here; that the grass isn’t always greener, and all that.

The joke among the ones that come back is, “Pensacola always sucks you back in.” Not exactly a glowing appraisal. It’s something to do with Pensacola being a small, conservative-leaning Southern city with (let’s face it) mediocre job prospects that turns off a generation that came of age on the Internet.

But the city is not what it once was. The city’s cadre of writers (myself among them), have written ad nauseam about the city’s ongoing transformation. You can read more about it elsewhere in this issue, in fact. Bottom line is that there is more to see, do and eat in Pensacola now than there has ever been. There are more places to work, too.

Now, perhaps you could argue that because I’ve lived here my whole life I don’t know any better; that other places are better, more modern, offer more to see and do and eat and buy, and look at, etc. etc. No doubt some do. I’ve done my fair share of traveling, though. Savannah, Georgia is nice. Asheville, North Carolina is nice. Portland, Oregon is nice. New York City is too much. Anywhere where it snows may as well be on the moon. But for all their amenities, I’ve yet to find another place I would consider better than Pensacola. Bigger, shinier, hipper? Sure. Better? Not yet.

Now I’m not going to argue that one should settle for a place because it’s “good enough.” We should each live where we are the happiest. I guess I’ve never understood what’s not to like about Pensacola.