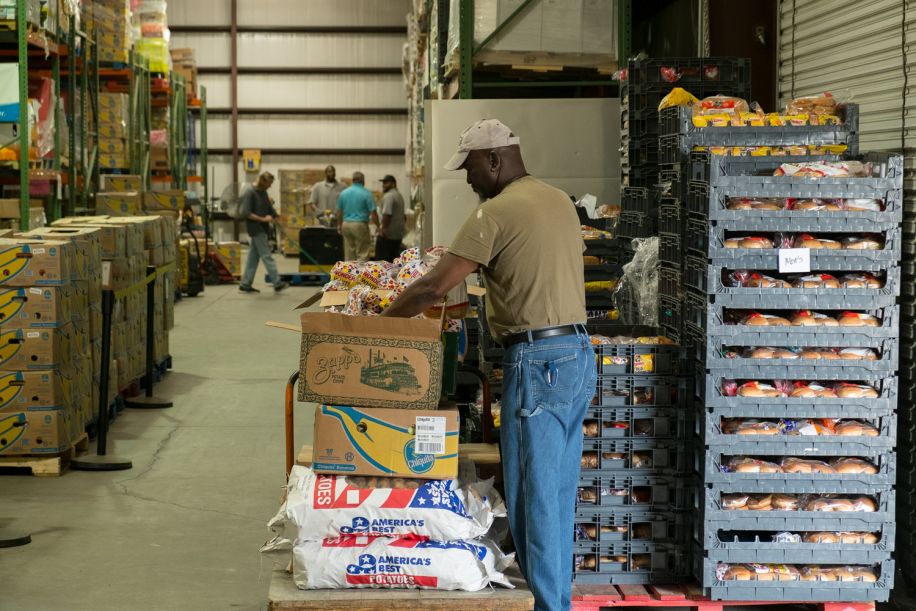 What happened to Bay Area Food Bank? It’s undergone somewhat of a marketing makeover, no longer referred to as the food bank of the “Bay Area” but as Feeding the Gulf Coast—a name that says exactly what the food bank aims to accomplish. So, while the name may be gone, the mission and values the local food bank sought to uphold have not been forgotten.

“Our new name more accurately describes our mission and reach,” said Kyle Schoolar, external relations and volunteer manager of Feeding the Gulf Coast. “When Bay Area Food Bank was established in 1981, the food bank serviced Mobile and Baldwin counties. Over the years, our service area has grown to over 20,000 square miles, including parts of three states and 24 counties, seven of which are in Florida.”

So far, the public response to the change from Bay Area Food Bank to Feeding the Gulf Coast has been very positive, and the new title allows the organization to show its strong ties to Feeding America.

In our own Escambia and Santa Rosa counties, Feeding the Gulf Coast successfully distributed over 3 million pounds of food in 2015. That’s over 2.3 million meals, which were provided to food insecure people in both counties.

To make this happen, the food was distributed through Feeding the Gulf Coast’s partnerships, which include almost 100 organizations from church pantries to soup kitchens and more throughout Escambia and Santa Rosa counties.

The nearest branch of Feeding the Gulf Coast is located in Milton, Fla., where over 8 million pounds of food were distributed just last year from the Milton warehouse. This was enough food for over 6 million meals, sent out to food insecure people in the seven-county Florida service area.

The faithful volunteers from our two-county area (Escambia and Santa Rosa) dedicated over 3,500 volunteer hours at the Milton warehouse in 2015.

Aside from distribution, Feeding the Gulf Coast is all about active involvement in food drives and charity events of various types.

This year, a portion of the proceeds from Seville Quarter’s annual Smokin’ in the Square event went to both Feeding the Gulf Coast and Santa Rosa Bridges Out of Poverty. Each organization received a total of $10,000, after the money was raised by Knights of Columbus through the event.

This year, the local Stamp Out Hunger Drive received over 26,000 pounds of food. To divvy up the donations and aid in distribution, post offices of Escambia and Santa Rosa counties were divided up among local hunger fighting organizations. However, all donations made in Pace and Milton went directly to Feeding the Gulf Coast.

Feeding the Gulf Coast is also in charge of several area programs, including the Mobile Pantry and Retail Store Level Pickup programs—two separate but cooperating programs.

Typically, when we think of food donation drives, our mind conjures images up of canned and other dry goods.

However, the Retail Store Level Pickup program gives Feeding the Gulf Coast’s food bank and its agencies access to a variety of foods, including fresh foods like produce, dairy, meat and bread. This is a feat the food bank wouldn’t be able to accomplish without the help of local retail grocery chains, who pull products nearing their expiration date from the shelves to donate to Feeding the Gulf Coast instead of throwing the items away.

The food bank began recruiting agencies to pick up food directly from the retail stores in 2013, which enables Feeding the Gulf Coast to use fewer resources like trucks, employees and monetary donations, while also helping to get the food into the hands of those who need it that much quicker.

In Escambia and Santa Rosa, Feeding the Gulf Coast received over 2.4 million pounds of food from 42 participating retailers in both counties. These retailers included Walmart, Target, Publix, Winn-Dixie and military commissaries.

Feeding the Gulf Coast served almost 800,000 pounds of food in 2015, which was distributed through 67 mobile pantries in Escambia and Santa Rosa.

On the other hand, the Mobile Pantry program provides at least 5,000 pounds of various groceries from fresh produce and frozen meats to canned and dry good items. With each distribution, 100 to 120 families in need can be served. All food is distributed and delivered the same day it is received, relieving the need for partner agencies to store the food.

Furthermore, to promote nutrition education in all ages of the community, Feeding the Gulf Coast has helped start two community gardens: one garden at the Boys & Girls Club of Escambia County, and the other called the “Grow Garden” on Dr. Martin Luther King Drive in downtown Pensacola. Both sites provide fresh, nutritious produce to agency partners, educate the public about the benefits of growing their own produce, and promote environmental awareness in the community.

The program’s goal is to get people working hands-on in the garden and participating in education workshops, and the program also serves as a way for other organizations in our area to gain access to resources for starting their own gardens. For example, this program helps community gardens grow by offering help with planning and breaking ground, preparing workshops, recruiting volunteers, grant writing for funds, marketing and promotion, and creating a community garden map for better accessibility by the public.

Feeding the Gulf Coast’s annual 30 Ways in 30 Days calendar can found online at feedingthegulfcoast.org. The calendar will provide readers with ways in which they can join the fight against hunger and raise awareness through the month of September—also known as Hunger Action Month.

Other ways to get involved include signing up to volunteer, donating foods and funds, or becoming a member agency to help distribute food in our service area. Donations can made whether you choose to become a monthly donor or give through one of the food bank’s campaigns and promotions. Even giving a $1 to the cause allows the food bank to provide five meals to someone in need.

If you are interested in hosting a food drive, or allowing Feeding the Gulf Coast to be part of an event, please reach out to Kyle Schoolar at either kschoolar@feedingthegulf.org, or 850-626-1332.