THE SOUNDS OF THE CITY ARE MUSICAL, RHYTHMIC AND AS VARIED AS THE CITY’S STORIED HISTORY. FROM THEATER TO DIGITAL BEATS AND SO MUCH MORE, LET’S DISCOVER WHAT’S ON THE PENSACOLA PLAYLIST. 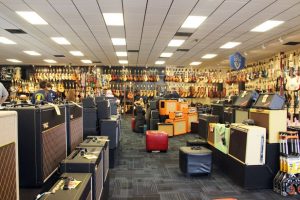 Blues Angel Music is as distinctly Pensacola as its name suggests. Open for almost 20 years, they offer instrument sales like guitar, ukuleles, mandolins, grand pianos and organs; lessons through their school; donations to the community through their Foundation; and more. The organization is more than just a place to pick up replacement strings for your guitar; they are fully committed to increasing the quality of life in the city through music.

“We do all we can to reach out and touch the community,” said Dan Fugate, Blues Angel’s marketing director. “Music makes your brain work better, it helps the left and right sides of your brain talk better, and improves quality of life for those with developmental disabilities.”

They also offer instrument rentals for school band, and all money paid toward the rental is applied to the final price of the instrument. If a child rents a violin and decides they’d prefer a tuba, that cost rolls over to the new instrument. The store, located at 6547 N. Pace Blvd., also features instrument repair and refurbishment.

Owner Jim DeStafney is a member of Beatles tribute band Not Quite Fab, and he is invested in supporting local music and bands. The store has even been named a NAMM (National Association of Music Merchants) Top 100 Dealer for five years running. DeStafney staffs the store with an eager group of music enthusiasts who are excited to provide information and advice relating to any of the instruments and accessories they offer.

They are currently going through an expansion, which started in April. The new store is eliminating a lot of excess counter space, consolidating the warehouse and offering walk-in service for instrument repair.

Through various community partnerships like Guitars for Vets, free lessons for the disadvantaged, and a dedication to proving the best products and service, Blues Angel Music is the provider of all the local music you love, providing an infrastructure of appreciation and professionalism that shows through the area’s robust live music scene. 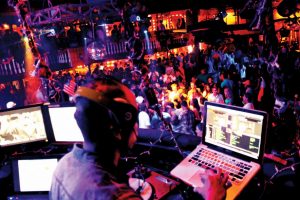 A lot of people think DJing is just plugging in an iPod. What all goes into it?

So much goes into it, but ultimately my goal is to keep the people moving and the drinks flowing. I want to be able to look at the suits and the bachelorettes and the hipsters and see them all having a good time. Sometimes I play rock, sometimes hip-hop or EDM, and sometimes a mixture of all of the above. I don’t really have a preset playlist. I just go on how I feel.

How did you get started?

I would go to clubs and listen to DJs and wonder to myself, “Hey, if I were DJing, what would I play?” So I went through my back catalog in my mind and sort of made playlists and I’d determine that one song might work better than another.

Do you do any remixing or editing yourself?

I will do some edits on songs that I like. Some songs need to be shortened, or I’ll bring the bridge or climax of a song to the front, so the good part gets played first. I definitely have DJ-friendly intros and edits that I can pull out as my secret weapon to get the crowd to respond in a certain way.

What are some trends you see in the industry right now?

You know, it’s funny. Seville doesn’t hire me to just play the Wobble every 30 minutes. They pay me to stay on top of music and know what the trends are. I’m a curator of music, fashion and pop culture in general. Right now, I’m seeing a real marriage of hip-hop and EDM. The sounds go together perfectly. It’s really the best of both worlds in a live setting.

Is it more of a science or an art?

Definitely an art. I can give another DJ the same 30 songs and it’ll sound totally different. I can give another producer the same synth and drum patterns, and it’ll be something totally unique. It’s definitely an art. You have to feel the room and the music. Without the creativity, it just becomes some guy with expensive equipment and some pop songs. 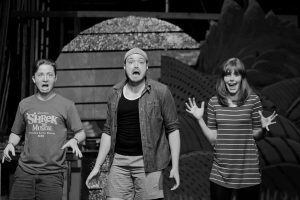 A big green ogre and his donkey friend are invading the Pensacola Little Theatre July 29 through Aug. 21. This show will serve as the both the Treehouse and Mainstage season finale to what has been a stellar year of community theater.

The play, based on the much beloved first Shrek movie, was on Broadway for just one year before fans across the country demanded it tour due to its infectious songs, timely messages, and humor that offers something to laugh at for kids and adults alike. With its fantasy elements and extensive prosthetic makeup, this show was a bit of a challenge for the Pensacola Little Theatre, but thanks to some hard work and imagination, the crew is excited for what they feel will be a blockbuster show.

“It has truly been a labor of love,” said Kathy Holsworth, PLT’s artistic director. “There are so many levels of giftedness and talent that went into this. It has been two years in the making.”

Over 140 people auditioned for the 35-person cast, which features lovable characters like Fiona and Donkey, as well as more prominently placed minor characters like Pinocchio and the Big Bad Wolf. The show closer, “I’m A Believer,” wonderfully ties up all the elements of both movie and stage in a wholly satisfying way that is sure to have people dancing in the aisles.

It may seem daunting to bring such a well-known movie to the stage, but Holsworth said that the source material was so wonderful that it’s really quite easy.

“Kids are laughing at the potty humor and adults are laughing at some of the more mature humor,” said Holsworth. “But everyone is touched by the message—that we are all special. You don’t have to be a pretty princess to have value. You can be who you want to be, even if your growing nose betrays you.”

The live show is a truly magical experience, according to Holsworth. It expands on the film and offers a visceral, interactive encounter completely different than the passive experience of watching a movie on the couch. So stay up late, swap manly stories, make some waffles, and head on down to PLT to take in Shrek. 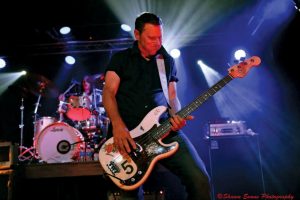 TIM NIELSEN OF DRIVIN’ AND CRYIN’

Tell me about your current tour.

We usually do weekend tours because that’s what works well for us. We just got back from Austin in fact and that was a week-long tour. We tour the country in a 15-passenger van that’s always loaded and ready to go. We’re still touring our latest set of EPs, so we feature all of our new material, plus all the hits.

Who do you look to for inspiration?

Each other. We have a lot of friends doing stuff we love—people like Elizabeth Cook, Todd Snider, Steve Earle and the whole southern Nashville scene. We just enjoy making music together because it’s fun. It’s tough sometimes too though, because instead of buying records or cassettes or CDs, now people scoop up music for free. It’s super hard for a band like us to feed the family with that business model, so we tour. We go to places like Texas and as far away as Holland and the UK. We try to make every show unique, so you never know what to expect. You’ll always find some improv jamming going on and we like stretching out the songs.

You were recently entered into the Georgia Music Hall of Fame.

We’re really proud of our Georgia roots. To be put in that institution with bands like REM and the Allman Brothers was a great honor.

What type of atmosphere do you like to create at the show?

We take you on a roller coaster ride. We’ll start with full-on rock n’ roll guitar and punk and hard rock, then halfway through we’ll take it all the way down with folkier country stuff. We make it quiet then bring it back up again. That’s always been our nature—two different personalities coming at you at the same time.

Why have you moved to the EP model?

Instant gratification syndrome, honestly. Also, for budget reasons, we’re trying to create new music with small budget projects, that way we start getting a return on them by selling them one at a time.