As Florida’s famous summers start to loom and the days grow longer, the air fills with the smell of sizzling barbeques and the excitement of food truck rallies. But what happens when the gas begins to run low on your propane tank and your event is on the brink of fizzling out? You give Jason Jordan at Grill Gas Express a call.

Jordan started his Florida business at the beginning of March, but had previously operated a Grill Gas Express business in Memphis, Tenn. and the north Mississippi area. “I had been doing it for about 6 years, and I ended up selling it and moving down here,” said Jordan.

Jordan said his business started when he worked for a commercial propane company, refueling propane tanks on forklifts. “I would have people come in and say ‘Hey, can you fill up my grill tank,’ and I would,” he said. “Then I started wondering why no one else was doing it. After that, I started the company and it took off right away.”

The concept of Grill Gas Express is relatively simple. Whenever your propane tank runs out of gas, you order a new canister and leave the old one in an easy-to-access area. Jordan himself will then arrive and swap out the container with a brand-new cylinder with a full 20lbs. of propane. You don’t have to haul them yourself, and you don’t have to leave your barbeque unattended. 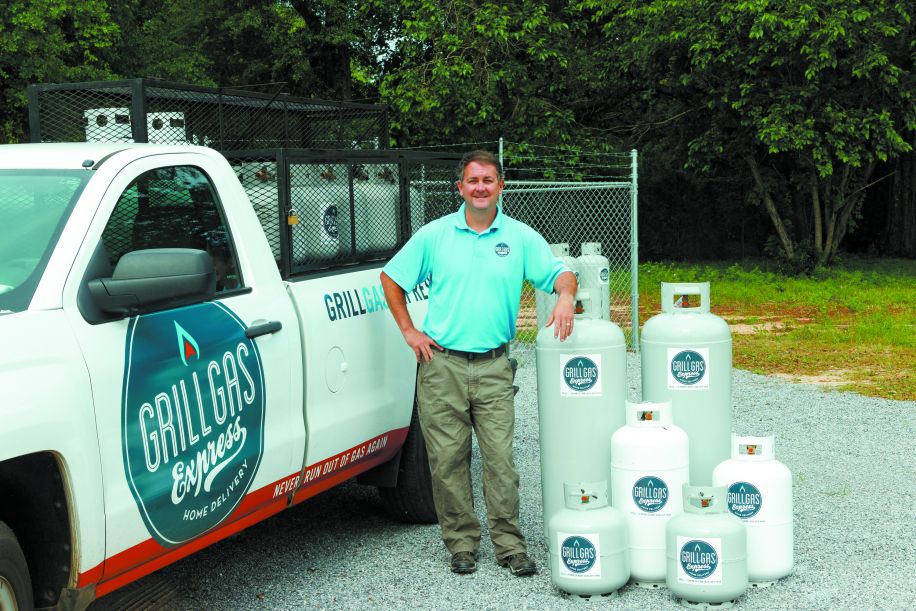 “A lot of places will only give you 15lbs. on a fill up, but we top it off with a full 20lbs,” said Jordan. In addition to residential propane tanks, Jordan also offers refills for commercial grills like those on food trucks, refills for patio heaters and even refills for RVs and campers.

So far, Jordan has been running the entire project as a one-man operation — using a small office, a fenced-in area holding empty tanks and a propane reservoir, along with a single truck. Despite the small set-up, Jordan has already gotten plenty of business and he believes the best part of the business is that he is working for himself and on his own terms.

“The hardest part is getting the word out,” he said. “I try to get as involved in the community as I can — I start with residential and then work my way to commercial.”

Even with these challenges, Jordan prides himself on his work; before selling his operation in Memphis, he had over 700 customers and never lost one or received bad feedback from them. His work also stays constant throughout the year — when he’s not filling up grill tanks, he’s filling patio heaters, so there is always a demand, he adds.

While still in the early stages, Jordan hopes he’ll be able to find as much success in Escambia and Santa Rosa counties as he did in the mid-south, potentially expanding with more trucks and an employee or two –or even franchising out the Grill Gas Express name.

For more information, or to place an order for Grill Gas Express home services, visit fl.grillgasexpress.com or call 850-619-1918.