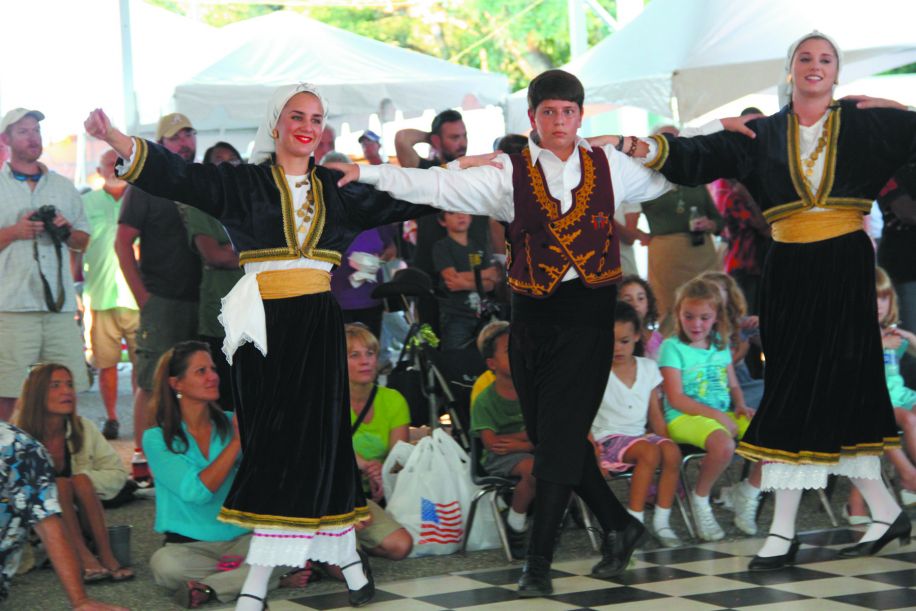 What does Mama Mia, the mythical King Stafylos, and Pensacola have in common? The Greek island Skopelos, of course. The Annunciation Greek Orthodox Church is hosting the 56th annual Greek Fest, and this year’s theme is Skopelos.

The Greek Fest is famous in the Gulf Coast for having amazing food, fun traditional music, and Greek dancers in traditional costumes. This three-day event draws upwards to 30,000 guests. This is no small festival. There will be live music; the popular Kostas Kastanis band will be back again this year to play traditional and modern Greek music throughout the weekend.

On the menu this year, served inside the hall, will be traditional roast lamb, lamb shanks, baked chicken, dolmathes, moussaka, pastitsio, spanakopita, tiropita, and Greek salads. The outdoor taverna (between the church and the hall) will feature the popular gyros, souvlakia (kabobs) and sausage wraps, chicken tenders for the kids, Greek fries cooked in olive oil, and calamari.

Don’t forget the desserts. You can smell the sweet cinnamon and honey drenched baklava in the air. The festival is free to attend. The food, drinks, desserts and goods are for purchase. This year there will also be a selfie-booth so you can capture your Greek memories and share them with the world.

The Greek community loves to share its history and culture with Pensacola and Gulf Coast communities. Many of the founding church members were from Skopelos, and that’s why this year’s theme is Skopelos.

The Greek culture has a long and rich history rooted in Pensacola. As far back as the mid to late 1800s Greeks left the shores of their homeland and immigrated to Pensacola. These early Greeks brought with them a love of their culture, heritage and faith that is still shared today, mainly through the Annunciation Greek Orthodox Church and the festivals.

The festival does more than share the history and culture of our Greek community; the festival is on a mission to give back to the community too. The Philoptochos Ladies Society (philoptochos means friend of the poor) that acts as the philanthropic arm of the church is involved in local charities, and over the years it has raised money for scholarships and community outreach programs. This year’s community outreach program benefits the Gulf Coast Kid’s House, Manna Food Bank, and Guardian ad Litem.

Located on 1720 W. Garden St., the festival hours are 11 am to 10 pm Friday and Saturday, and 12 pm to 6 pm on Sunday. Tickets, cash and checks are accepted at all cash registers. Credit cards will not be accepted to purchase tickets; however, there will be plenty of ATM machines available on-site. More information can be found at pensacolagreekfestival.com.