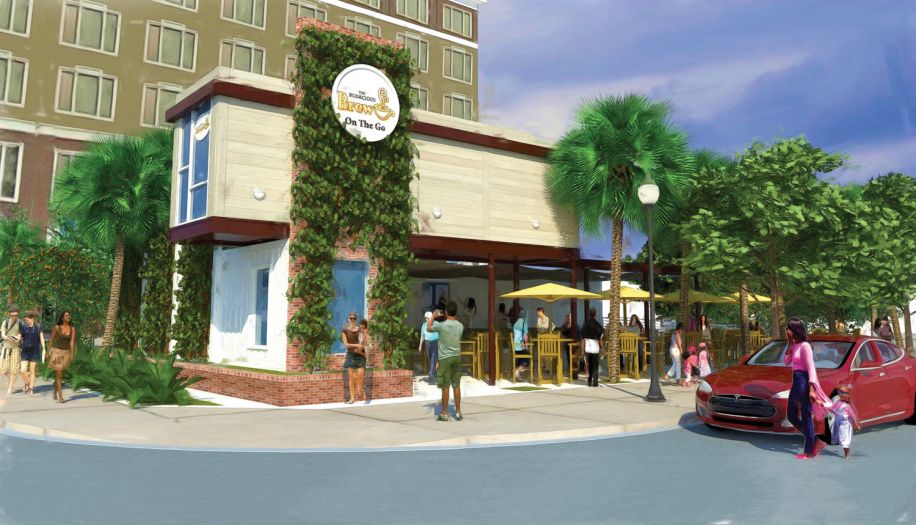 Downtown Pensacola’s diverse dining scene has really expanded in recent years. A range of ethnicities is represented, as are a spectrum of price points. What the area lacks, though, are tasty and budget-conscious options for breaking through that 2:30 pm office feeling or grabbing a quick cup of joe from your car on the way into work. Luckily, like many other shortcomings that businessman and real estate developer Quint Studer has identified, these issues will be remedied in no time.

It is no secret that Studer and his wife Rishy have transformed the Downtown area. From his purchase of Five Sisters Blues Café and development of the Bodacious Olive and Bodacious Brew to his ownership of the Blue Wahoos baseball team and actualization of apartment living off of Jefferson in the old PNJ building, Quint and Rishy have a knack for making the area more entertaining and accessible for all ages and incomes. He is continuing that trend with two new ventures: Bubba’s Sweet Spot, a candy and ice cream store in partnership with golfer Bubba Watson, and Bodacious On-the-Go, a quick-grab coffee option made out of economical and industrial shipping containers.

These ideas may be well-worn in other cities across the country, but they are truly innovative for this area, which has traditionally struggled to capture the attention of middle-income families, as well as it has high-wealth power-brokers. Both locations will go south of Government Street in an area known affectionately as SoGo. The square blocks have seen a renaissance in recent years much like their neighbors to the north.

Bubba’s Sweet Spot has been in the works for a while, ever since Rishy visited other cities and noticed that most downtown areas have a child-centric retail and food service space. She thought Downtown Pensacola would really benefit from a touch of childlike whimsy, with bright decorations and bold, local flavors. Professional golfer Bubba Watson wanted in, and Bubba’s Sweet Spot was born.

With an opening slated for July 1, it won’t be long until all Downtown denizens can enjoy fresh ice cream, gravity-fed candy, a centerpiece lollipop tree, fresh-dipped fruit like chocolate-covered strawberries, hand-dipped apples and more. A little old-school 50s diner and little bit new-age Willy Wonka-like whimsy come together to make Downtown’s next hotspot for dates, a treat after the ball game, or every child’s dream come true.

“We’re still working out some specifics like the different candies and interior decorations, but we expect it to be really fun and popping once it opens,” said Maryjane Gardner, media and public relations manager for the Blue Wahoos. “We’ll soon be putting in equipment to make sure we really cultivate that classic candy store feel.”

The location was originally slated to be on the corner of Main and Baylen, but as that spot was recently approved for the other forthcoming shipping-container coffee project, called Bodacious On-the-Go, Bubba’s Sweet Spot has moved to 412 S. Palafox, right in the heart of the SoGo district.

“This new location is about 1,000 square feet, which is just perfect for us,” said Jonathan Griffith, president of the Blue Wahoos and of Studer Entertainment and Retail. “It made more sense to put it in this new location, and we’re excited.”

For those wanting a slightly more mature jolt of energy, the Bodacious Brew is opening what amounts to a drive-through satellite location just a block away from its current residence. At the corner of Baylen and Main will soon be a walk-up or drive-through locally roasted coffee option, with some outdoor seating and games for kids to boot.

Rishy Studer said the concept for the On-the-Go came from customers who expressed an interest in drive-through coffee downtown.

“Ever since we’ve opened, we’ve had customers ask if we were going to add a drive-through, for those times when you’re in a rush or the weather’s not great for walking to a coffee shop,” said Rishy. “So, we decided it was time to do this.”

Studer said the concept would include not only a drive-through but also additional patio seating and a kids’ area with games and interactive landscaping.

“We want this to be a place where people can not only drive up and get a coffee, but, also sit and enjoy downtown, while their children play,” she said. “We’ll be roasting our own beans as well, so we think that will add another element to the whole downtown experience.”

The containers were based on what the Studers had seen while doing research on other urban drive-through projects. They expect construction to start early summer and hope to be completed and open for business by the end of 2016.

For those worried about traffic backup on Main, Travis Peterson of Impact Campaigns, who has been working with the Studers on this project, said there is nothing at all to worry about.

“The traffic flow has been engineered to ensure we don’t back anything up,” said Peterson.

With these exciting new developments, Pensacola moves one small step closer to achieving marketability for all age groups and incomes as it becomes a better place to live, work and play for all.