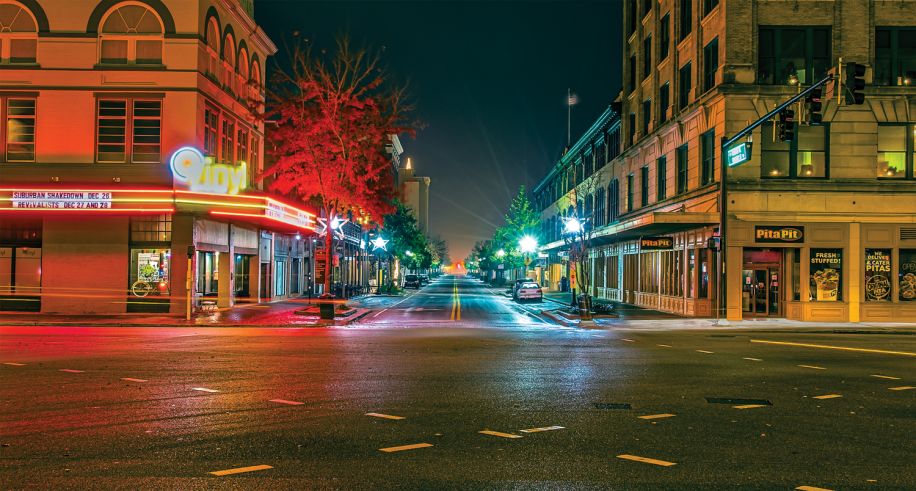 In the year of its 25th anniversary, the popular Downtown event Gallery Night is ending after ongoing difficulties with funding and complaints about the gradual departure from its original mission of spotlighting arts and culture. The news came on April 12 after the Downtown Improvement Board’s (DIB) monthly meeting. The DIB members present voted unanimously to end Gallery Night in September.

In the weeks following the decision, the news has had a mixed reception. DIB chairman John Peacock expressed that this change will help return the board to its original goals of removing commercial blight, enhancing property values, encouraging economic development and so on.

“The event has served its purpose,” said Peacock. “It has become something else entirely. “We don’t want to wake up Saturday morning and find our streets littered with trash. We don’t want to constantly struggle for funding. To be honest, this conversation started over a year ago.”

Gallery Night began in 1991 with eight participating galleries after Andy Witt, executive director of the Arts Council of Northwest Florida, envisioned an event on Friday evenings for art-viewing, wine-tasting and live music. The DIB was one of the first sponsors of the event. Gallery Nights were initially held three times a year to coincide with spring break, July 4, and Blue Angels schedules before eventually going to 12 nights a year after the DIB took over completely. Soon thereafter, the event began receiving widespread criticism for morphing into a “street party.”

Peacock said, while the DIB is ending its facilitation of Gallery Night, he plans for the board to start a new event in the spring of 2017 that focuses more on the arts, an original objective of the event.

“The DIB isn’t going to do nothing; it just isn’t going to do this,” said Peacock. “We did a survey and 50 percent of businesses said there would be no negative impact from removing Gallery Night. I was at a rotary meeting and asked people to raise their hands if they’d miss the event. Not a single hand went up. I don’t think very many people are upset.”

There are those who are quite upset, of course. One of those is Joe Abston, owner of Hopjacks and The Tin Cow on Palafox. His businesses have experienced record profits on Gallery Night and he says that he and many like him will suffer from the absence.

“The City and the DIB don’t realize the larger impact of what goes on,” said Abston. “It’s a good night for the bars and restaurants, sure, but there’s also a lot of people who plan their regional trips based on Gallery Nights. This is a bigger event than just people in the streets. I would argue Gallery Night made Downtown what it is today, it rejuvenated things, and people don’t remember what those times were like.”

Abston went on to say that there’s an element of classism in this decision—that the decision-makers want only high-brow individuals to enjoy what Downtown has to offer.

“Gallery Night is a social event and should be for everyone—rich, poor, white, black, young, old—who wants to enjoy what we’ve become in their own way,” said Sweida. “They’re taking the most popular event in Downtown’s history—something that helped earn Palafox the title of one of the ten best streets in America—and they’re eliminating it. It simply makes no sense.”

Sweida believes that the DIB did not market the event properly and impress upon Downtown retailers the value of bringing 15,000 potential customers to their doorsteps every month.

“There are too many 10 to 5 businesses Downtown,” said Sweida. “Gallery Night should’ve encouraged these retailers to stay open and take advantage of the tens of thousands of people, but instead they don’t know how to use it to their benefit. Maybe if they did, we wouldn’t have a funding problem.”

That funding problem was certainly a big one. It costs about $8,500 to run Gallery Night each month between police, insurance and other costs. While Peacock has encouraged private enterprise to take over the responsibility and facilitation, many do not see that as realistic.

“I don’t think a private takeover is going to solve the funding problem,” said Abston. “The retailers don’t see the value, but they certainly benefit from the value of increased awareness.”

For now, the DIB will focus on holiday lights, beautification and other aspects of Downtown life on which there is broad consensus.

“Gallery Night did some very good things, but it also did some bad things,” said Peacock. “It was a bad atmosphere and a bad image for the city, especially into the later hours. So we’re going to look at what we did well and take away the bad things and hopefully have a great event not called Gallery Night starting next year. If the street party was so important to the Downtown businesses, they would’ve written checks, but they didn’t.”

“It’s sad,” said Abston. “The DIB used to be a place where you could come up with big splashes and talk about big ideas for Downtown. Now it’s a place where we talk about holiday decorations.”