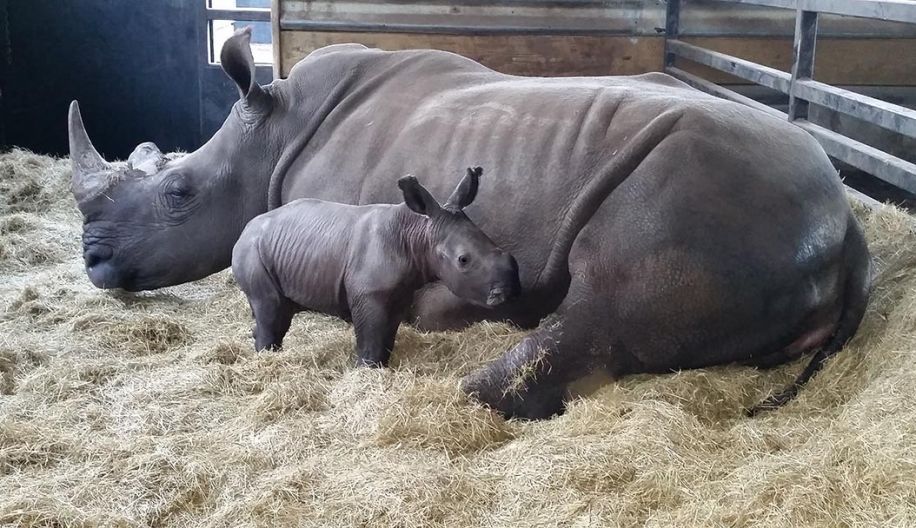 Early in the morning Jan. 20, Gulf Breeze Zoo Lead Keeper Adrianne Leopard checks on soon-to-be mother Katie, the Southern White Rhinoceros. It has been a long 16 months of waiting and anticipation.

But early that morning, Leopard discovered the wait was over and little Katana stood as the first rhino to be born at Gulf Breeze Zoo. She is the first, but not the last, according to the zoo’s Director Jesse Pottebaum.

“Our biggest focus is to create a herd,” he said. “The more we can get a herd, the population actually seems more natural. In the natural environment, this rhino female (Katie) would be with several other cows, having calves, rearing offspring, and they go off on their own sometimes, but they usually come together. Males become bachelors. They are always by themselves. So our goal is to simply replicate what the natural environment would be producing.”

While being a joyous occasion for the zoo, Katana’s birth also contributes to efforts to save the rhino. While Southern White Rhinos are considered to be the most populous of the five rhino species, there are less than 20,000 left in the world. In March of this year, the last male Northern White Rhino died, leaving only two females left of the entire subspecies.

Rhinos are often killed by poachers for their horns, which are made of keratin, the same substance that human hair and nails are made. However, some cultures believe specifically rhino horn has medicinal properties, something the scientific community has denied for many years. The poaching of these rhinos is made even more tragic by the fact that when rhino horns are broken or cut off, they grow back within two to three years. Still, the rhino population has been decimated by more than 90 percent since the 1900s. A higher demand for rhino horn starting in the mid 2000s has spurred another wave of poaching in the new century.

“Rhinos are a very large mammal, which means they fill a huge niche in the plains of Africa,” Pottebaum said. “Once you take away one of those niches, it will impact every species in that area. What we can do with conservation is develop breeding programs –they are what is going to be the future for protecting a species. It’s only a matter of time before that 20,000 is down to 500. I would say that happens in less than a decade.” 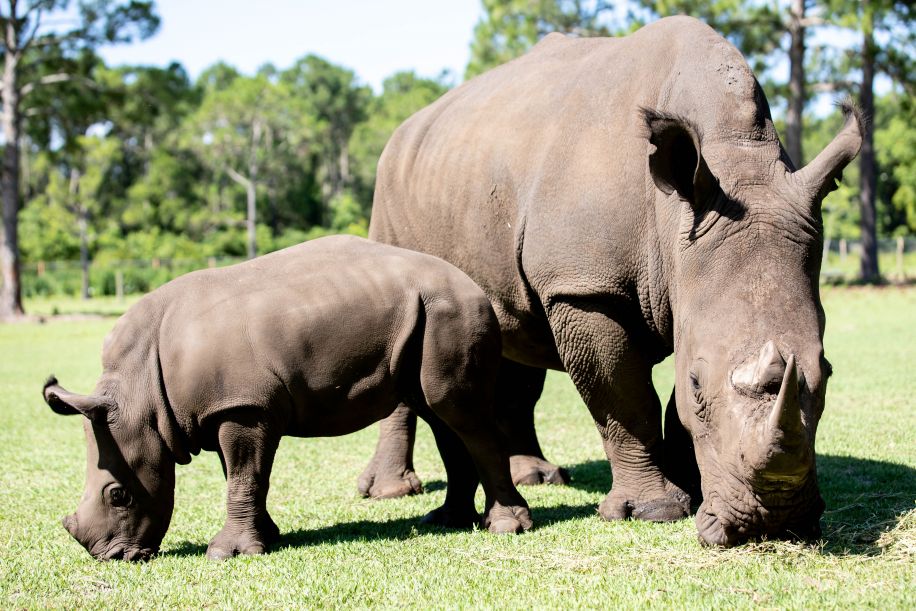 Pottebaum said an average of three to four rhinos are poached every day.

However, there is hope for the rhinos. Katana’s birth, along with breeding programs in other zoos and wildlife preserves all over the world, help fight to keep the population steady, to keep the rhinos from extinction.

“We’ve actually brought back numerous species from extinction and it was because they were bred in captivity,” Pottebaum said.

Animals such as the gray wolf, which are still considered extinct in most of the United States, were reintroduced into the wild and now have small, localized populations, a claim to what captive breeding and conservation programs can accomplish.

While no one is considering releasing rhinos into the plains of the United States, their care and continued births in North America help to keep the global population from total decline.

“America has shown that this can work,” Pottebaum said. “And a lot of other countries are starting to follow suit.”

At the Gulf Breeze Zoo, keepers continue to do their part in the conservation effort by caring for the new baby and looking forward to future births and additions to the zoo.

“Our goal now is to create our own population here and to do some consortium work with other zoos in America,” Pottebaum said.

Katana continues to grow at an astonishing pace, nearly ten pounds a day. In a few years, she will be around 3,000 to 4,000 pounds, like her mother. Her father Robbie weighs in at around 5,000 pounds; male rhinos are the second largest land mammals behind elephants. For now, Pottebaum describes her as a little “bowling ball” that can be seen out with her mother and playing with the other animals.

“Like any mammal, they all have play behavior,” he said. “Play is a good thing. Play is what builds your fundamentals of your arms and legs all moving well so there is a lot of time you can see Katana out there playing while mom is simply grazing. Mom is just like “Whatever” and Katana is out there chasing rhea and other hoof stock. That’s good behavior.”

Robbie, Katie and Katana can be seen in the Gulf Breeze Zoo’s open preserve safari via the boardwalk or guided train tours. Look far into the front left corner for a glimpse of little Katana and the other rhinos, and do not forget to say hello to all her unwitting playmates as well.