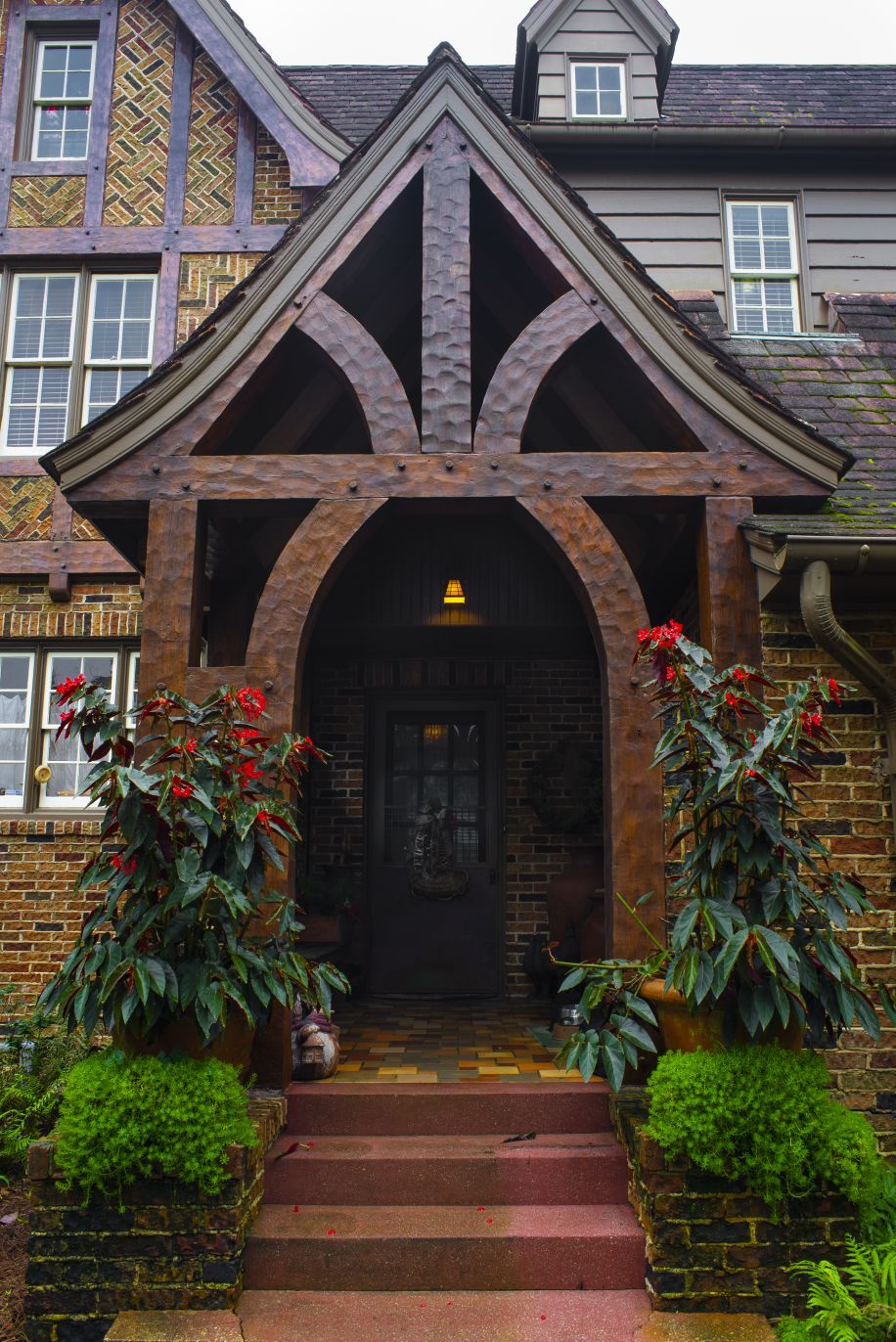 Located on a corner of the North Hill Preservation District is the historic site of a Spanish fort, the fort from which General Bernardo de Galvez bombarded the nearby British Fort George, leading to the surrender of the British to the Spanish in 1781. If you visit though, you won’t find fort walls and cannons. You’ll find a Tudor-style home nestled under the shade of trees, including an old oak that stands guard in the front yard.

Fifteen-year residents of the home Pam and Harry Schwartz have been preserving the house along with collecting art from a variety and local, national and international artists. With plans to donate the home to the University of West Florida Historic Trust, the Schwartz have been enjoying being a part of the history of this grand home. 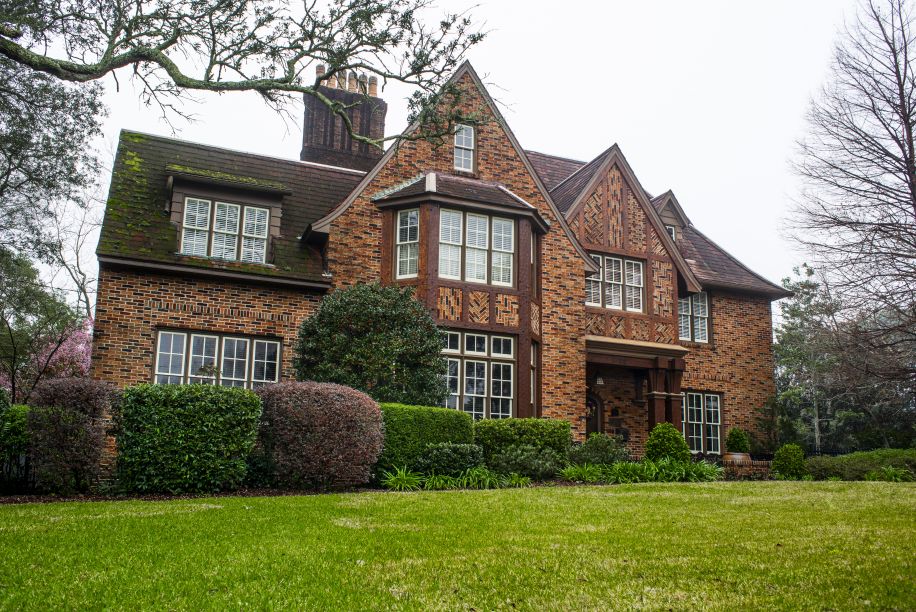 Originally built in 1927 by Dr. Walter Payne for his Scottish bride, the five bedroom, five and a half bath home was designed by English workmen and placed at the highest elevation in the area. Lauded for its superior craft and historic significance, the home has since become a highlight of the North Hill Preservation District. Once sitting abandoned for several years, it was brought back to life over two years of renovations by the previous owners, with Pam and Harry stepping in to continue the home’s care.

Pam said she hopes that by acting as caretaker to this small but important part of Pensacola’s history, the house will continue to be of use to the larger community and she would like to see it continue to be lived in once given to the Historic Trust. In addition, she and others are leading a charge to have the entire Florida panhandle labeled a World Heritage Site for its maritime history.

“It’s got to happen because we are so special for this type of history,” she said. “I think we will eventually become a world Historical Site.”

Pensacola Magazine got to explore a tiny part of the panhandle’s grand maritime and local history inside the Schwartz’s beautiful home. 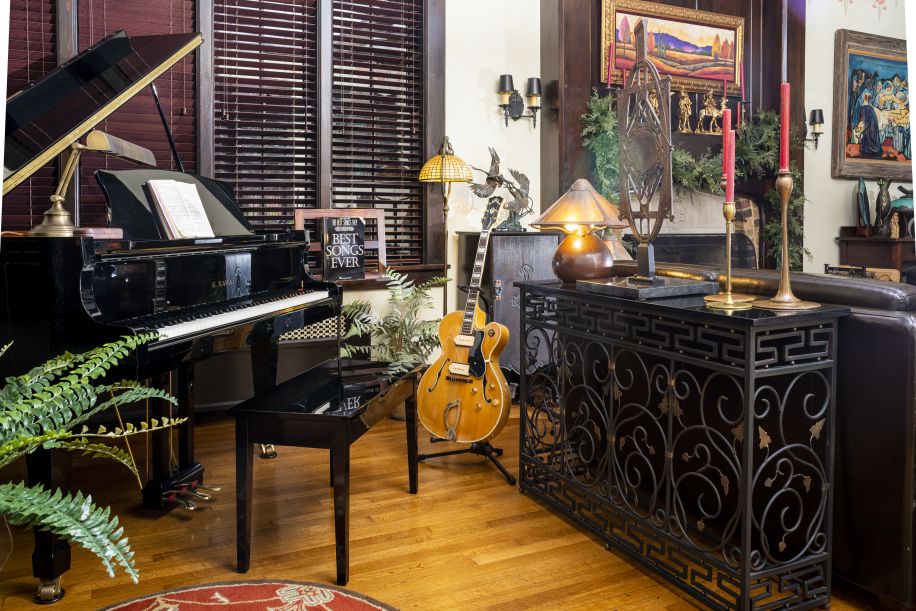 The Schwartz home is a veritable museum of local and international artists. Their living room features a grand piano left from the previous owners and several statues, glass sculptures, and paintings. Highlights include a painting from Spanish artist Miguel Zapata featuring a suite of armor and a piece by Abraham Rattner called The Pieta, which has a sister painting in the dining room featuring the Crucifixion. Standing on a table behind their sofa is a metal work of intricate design by Louis Sullivan. Once a stair banister from the demolished 1893 Chicago Stock Exchange Building, it now stands as part of a several pieces from the building that the Schwartz have collected over the years. Pam said she loves the work of Louis Sullivan and she especially likes the pieces from the Stock Building, as Harry’s family came from Chicago and she feels they are honoring his history by preserving what is left of the destroyed building. 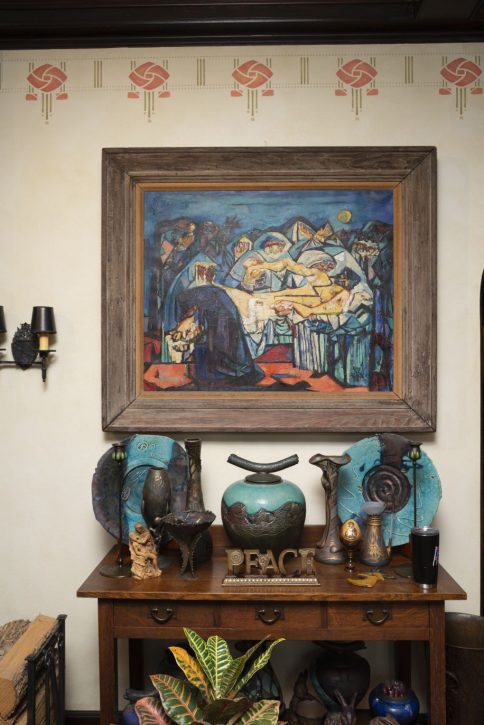 Rattner’s The Pieta sits above several raku pottery pieces from local artist Christophir Ryon. The turquoise in the pottery compliments the colors in several pieces in the Schwartz’ collection and matches the William Morris-style stenciling in their foyer.

Arts and crafts fill the home, but the spaces they fill compliment the living atmosphere of the home. The foyer is decorated with a William Morris-style stenciling to honor the original English design of the home. Throughout the home are the original finished hardwood floors and stenciling along the top of the walls reminiscent of the Tudor style. 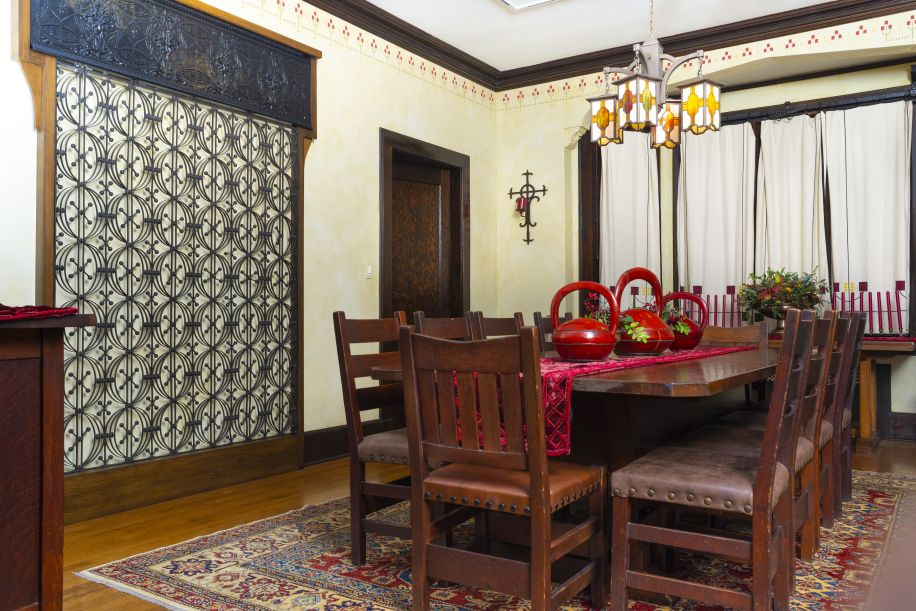 The dining room features a rosewood table with dynamic light fixtures to compliment an evening with friends or an intimate dinner. The second Rattner painting, Darkness Fell over the Land, featuring the Crucifixion, is hung on the wall in much the same style as The Pieta is in the living room.

The standout feature of the dining room, however, is the metal grill laid against the wall. Originally from the 1893 Chicago Stock Exchange Building, this elevator grill and surmount plate is the main piece from the stock building that the Schwartz collected. Found in disrepair, extra care was taken to restore the grill and plate, with extensive work needed on the plate. 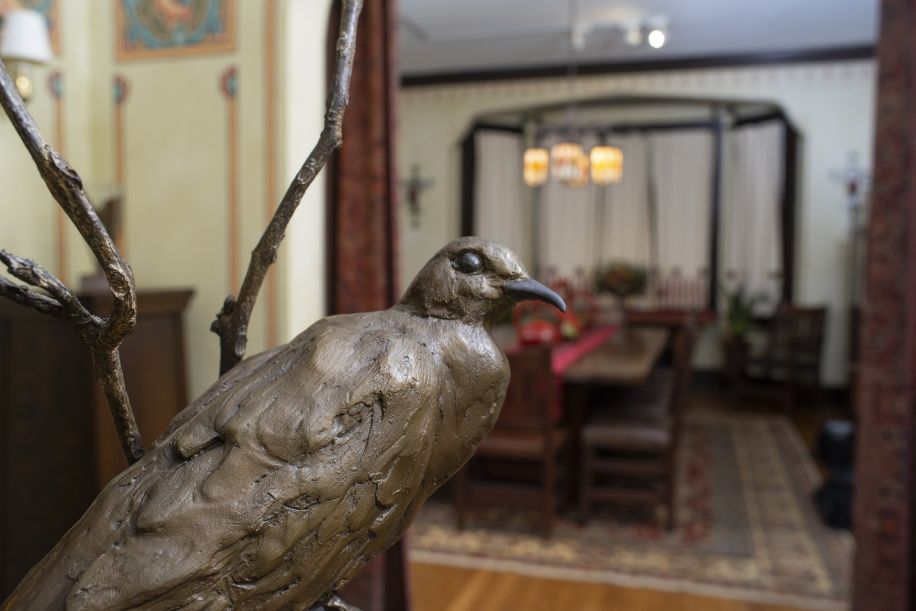 A dove from California’s Half Moon Bay sits as the centerpiece of the foyer and the first piece of art guests will see when entering the home. Its artist carved the dove after rescuing and bringing back to health an injured dove, which refused to leave the artist’s side even when released. Pam said the summer she moved into her new home in North Hill, a mating pair of doves nested on their porch. It was a sign to her of good things to come.

Heading onto the second floor, the bedrooms are just as decorated as the rooms below. With three guest bedrooms, each featuring a different theme, we were drawn to the glowing rosewood bed of the largest guest bedroom. The room features paintings from Marc Chagall set in an easel and along the walls. However, the hand carved mahogany chest sitting at the edge of the bed inspired us most. Made in Honduras, the Schwartz brought it back to highlight the importance and beauty of hand crafted arts and crafts, a theme that runs throughout their home. The chest is decorated to imitate calla leaves and compliments the soft colors of the Chagall hung nearby and the mint-colored walls. 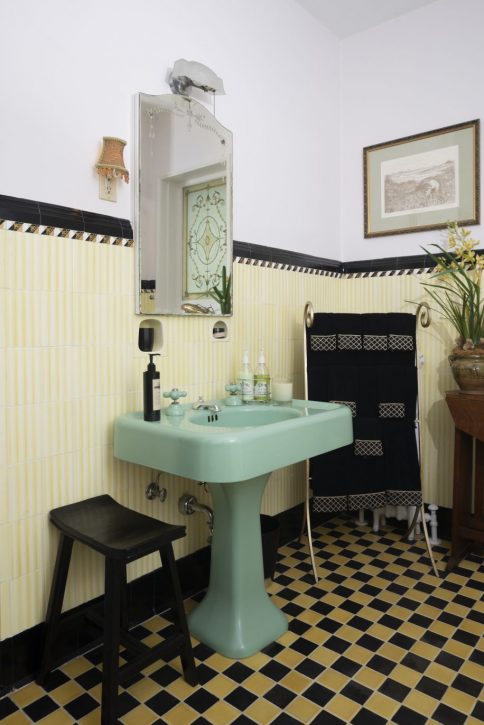 The bathrooms in the house offer original American Standard First Edition fixtures and designs, with tiles from the Angelini Tile Company. Of all the rooms in the house, the bathrooms are the most perplexing. While offering a beautiful organization of tiles and fixtures, the colors range from pepto bismol pink and green featured in one bathroom to navy blue and white in another. 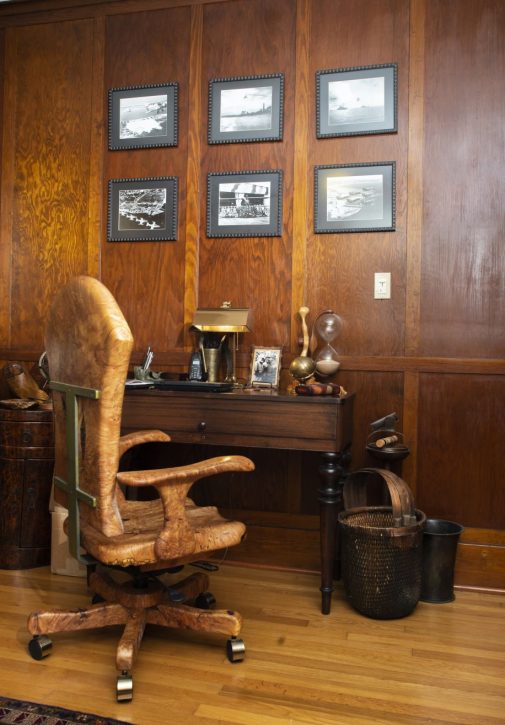 Harry’s study features a collection of naval pictures from Naval Air Station Pensacola from 1914 and 1915. The Schwartz have also collected pieces from the Gulf Coast Art Festival, including the chair and hourglass in Harry’s study. Along with the focus on local art, the study also features ceramics made by Picasso. Throughout the house, original pages from Harper’s Weekly newsletter featuring the history of Pensacola is hung along the walls. 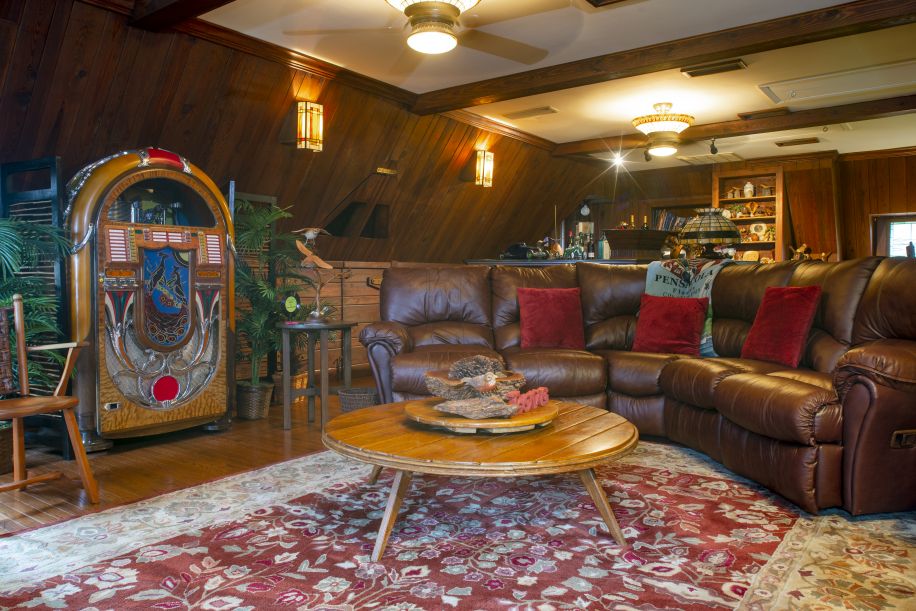 The third floor of the house is an open space used as Harry’s “man cave,” according to Pam. With a custom bar and Harry’s original model trains, it does feel like the main place to hang out and watch the big game. The room also features a working Wurlitzer 850 Peacock Jukebox and a working gramophone for dancing the night away. 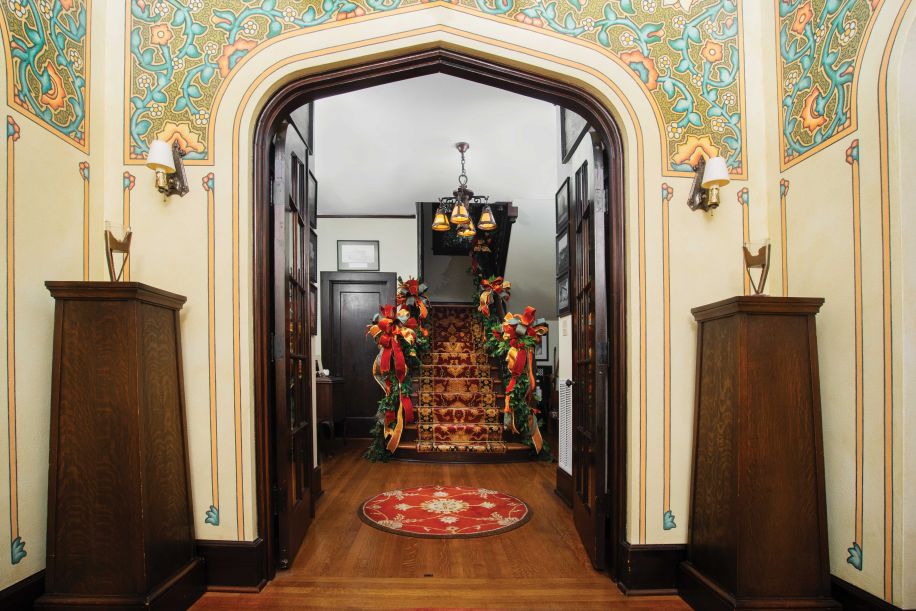 Not to be outdone by the wonderful treasures in the various rooms of the house, the stairwells features amazing art as well. The first floor landing features a dual set of painting from Miguel Zapata, who visited Pensacola during the city’s 450th anniversary celebration. In commemoration of the celebration, Zapata painted two pieces just for Pensacola, both now facing each other in the stairwell. The painting featuring Native Americans also includes a license plate, a signature of Zapata’s. 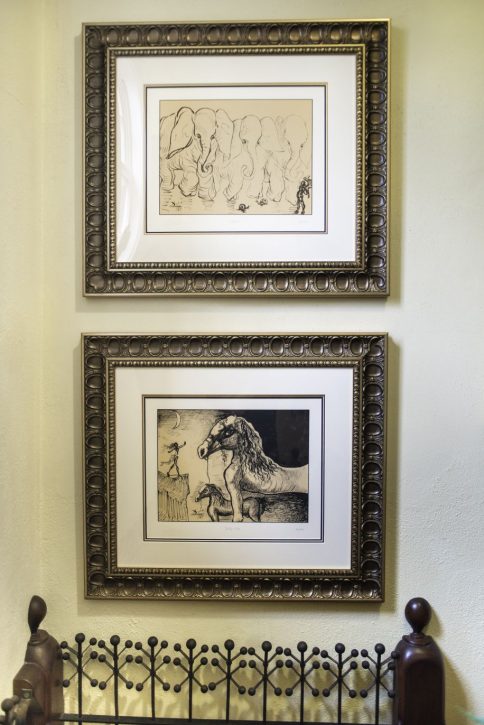 The second floor landing stairwell features another piece from the 1893 Chicago Stock Exchange Building, a railing in the same design as the elevator grill. Artwork hung on the wall includes storyboards from an animated short that was a collaboration between Salvador Dali and Disney. It was not completed until recently, when it was released to critical acclaim. 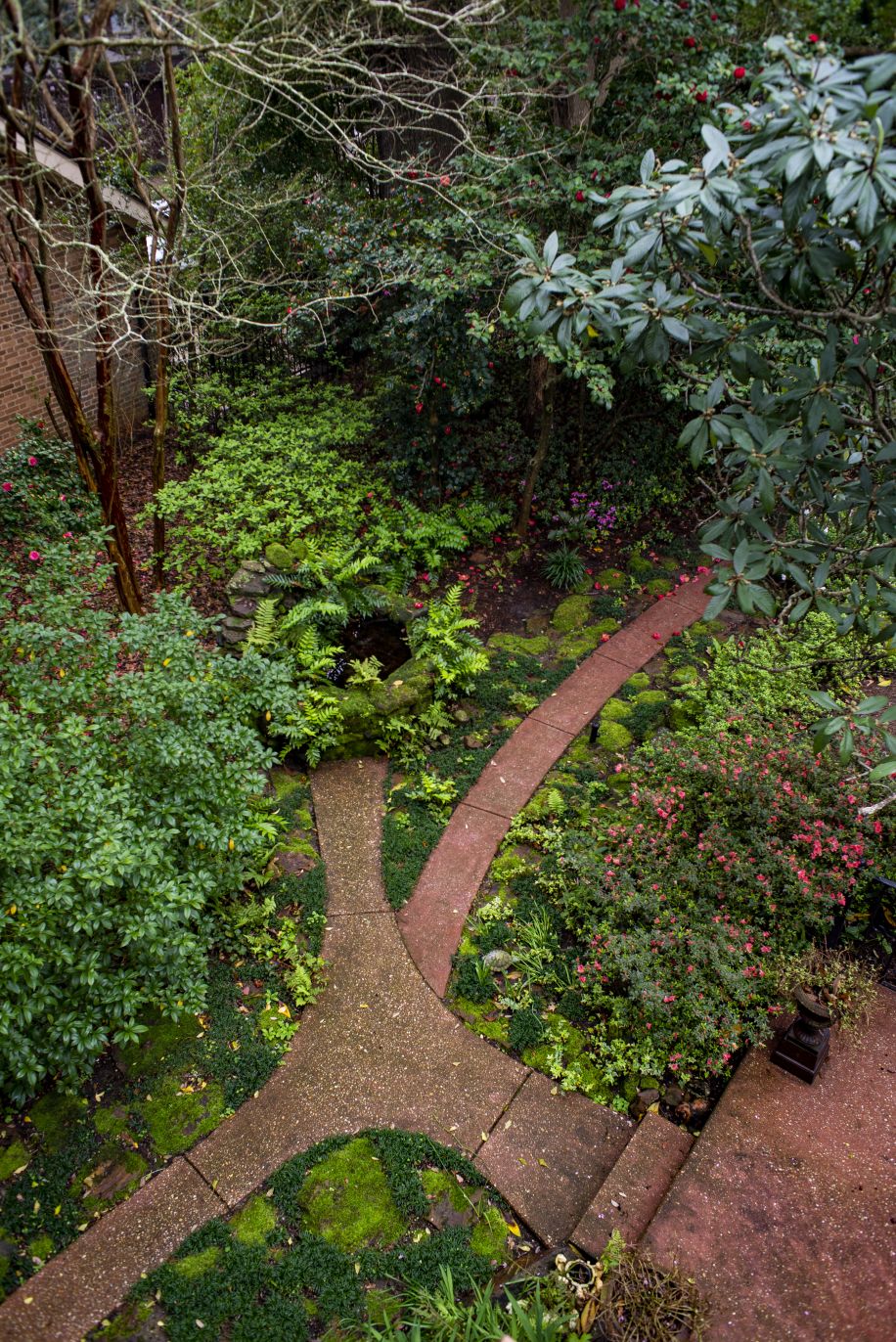 The grounds of the Schwartz home was curated and designed by local Jim Rigsby as a favor to the family. It features small pathways that are original to the house and an extended porch. The landscaping includes azalea trees and oaks from when the property was first established. An angel statue underneath a shaded awning serves as a reminder and honor to Pam’s late mother. The back entrance features large wooden beams original to the house. 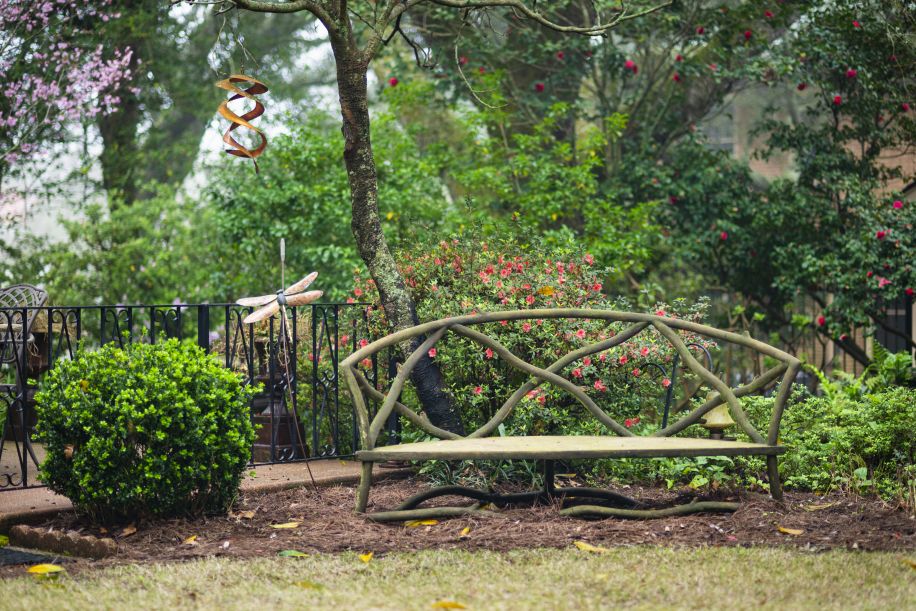 Furniture featured in the Schwartz garden came from local shop Duh, including a wooden bench sitting near the azalea bushes. The focus of the garden was on natural beauty, with Pensacola itself providing the inspiration for the landscaping.