When Kenny Holt and Mark McLeod purchased their home in the North Hill neighborhood of Pensacola in April 2015, they knew the home was historic, but they had no idea just how much history the house actually contained. “We weren’t actually looking in North Hill,” said Kenny. “Our realtor brought us to the house next door and we saw that this one was also for sale. I walked upstairs and walked out and said, ‘Nope. I’m out’ because it didn’t have a bedroom downstairs. We came back several times and I actually started falling in love with it. It’s one of the few houses we actually agreed on and liked. Both of us like the charm of an older home and we had been looking for years to see if we could find the right one that we both liked. We loved the neighborhood. Everybody who was walking by waved and said hello, so we felt welcomed to the neighborhood.” 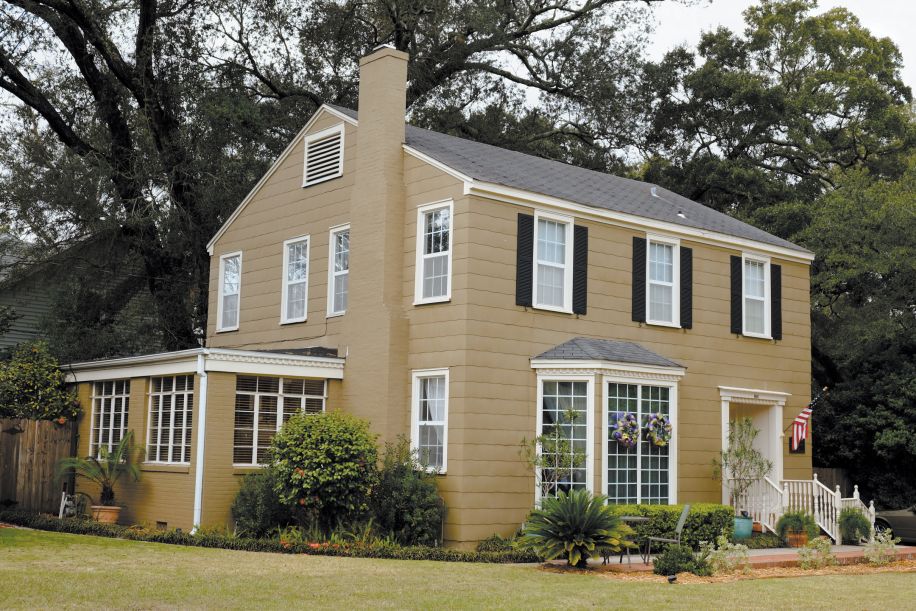 Kenny and Mark knew that they were only the fourth owners of the home, but they had a difficult time determining the original owners. While searching for a picture of the home during the year it was built, they discovered that Wally and Virginia Dashiell had the house built. “The house was built in 1939,” said Kenny “and it was designed by Virginia Dashiell, which we find incredible. It’s unique for a female in the 30s to take on such a role.” 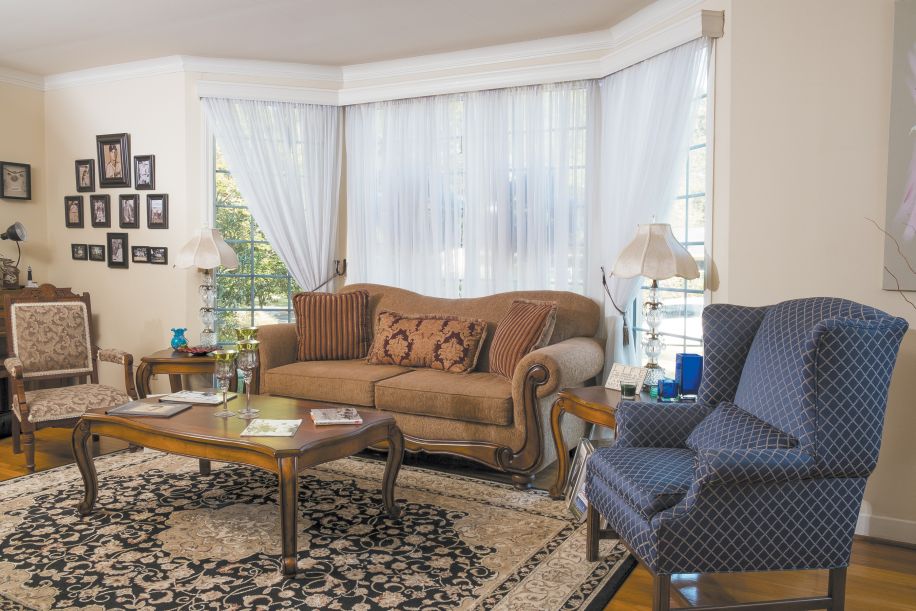 Kenny and Mark’s research led them to the Dashiell’s daughter, who is 80 years old and still living in Pensacola. From her, the two learned a lot about Wally’s accomplishments—from Texas to Tennessee and Atlanta to Pensacola. They learned Wally Dashiell was a well-known baseball player—and later team owner—who settled his family in Pensacola and made a lasting impact on the community. The couple also connected with Quint Studer who introduced them to Scott Brown, author of Baseball in Pensacola. Local historian John Appleyard, the UWF Historic Trust, Dean DeBolt and many more assisted in their research. “The history we’ve discovered has been a wonderful joy. The opportunity to meet numerous people along the way that knew the Dashiell family and who shared photos of the house, their stories, etc… has been incredible,” said Kenny and Mark. 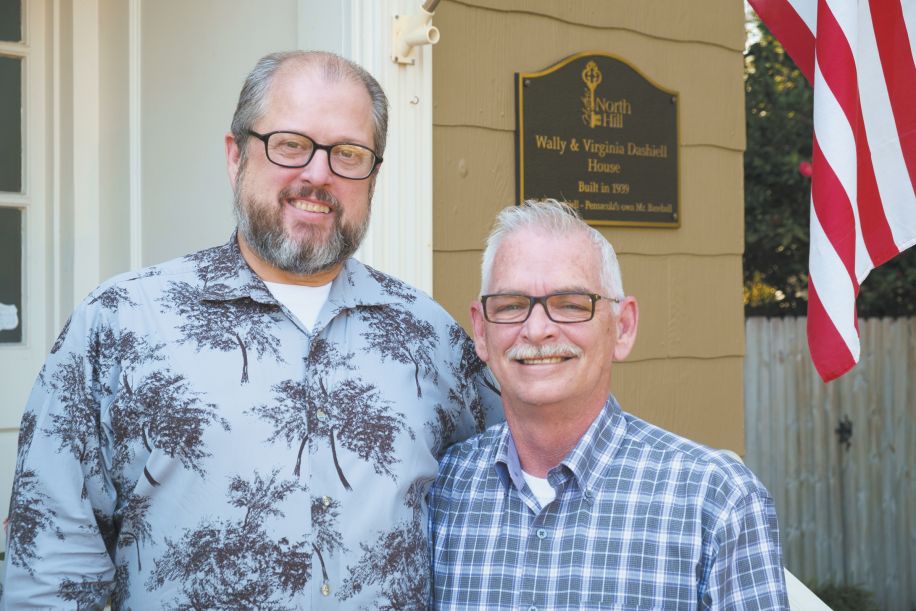 The comfortable and welcoming living area is an eclectic mix of the couple’s individual styles. While Mark tends to enjoy a more formal aesthetic, Kenny leans toward the more casual. “So we have had to try to figure out a nice little blend of the both,” said Mark. “We both love antiques!” 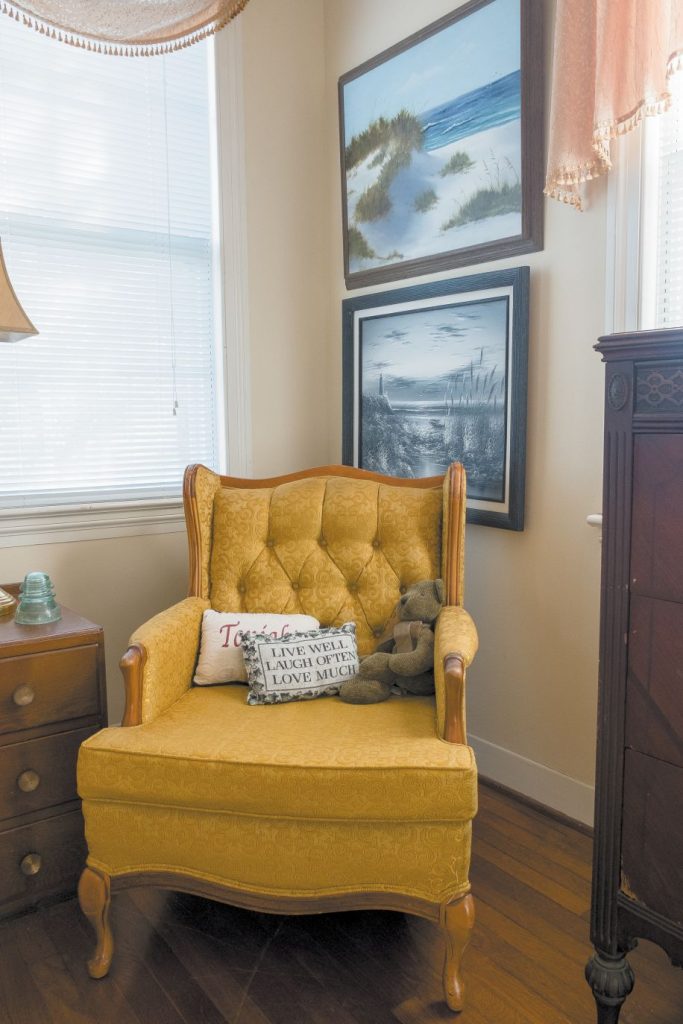 A wall of vintage photos and memorabilia pays homage to Wally and Virginia Dashiell. 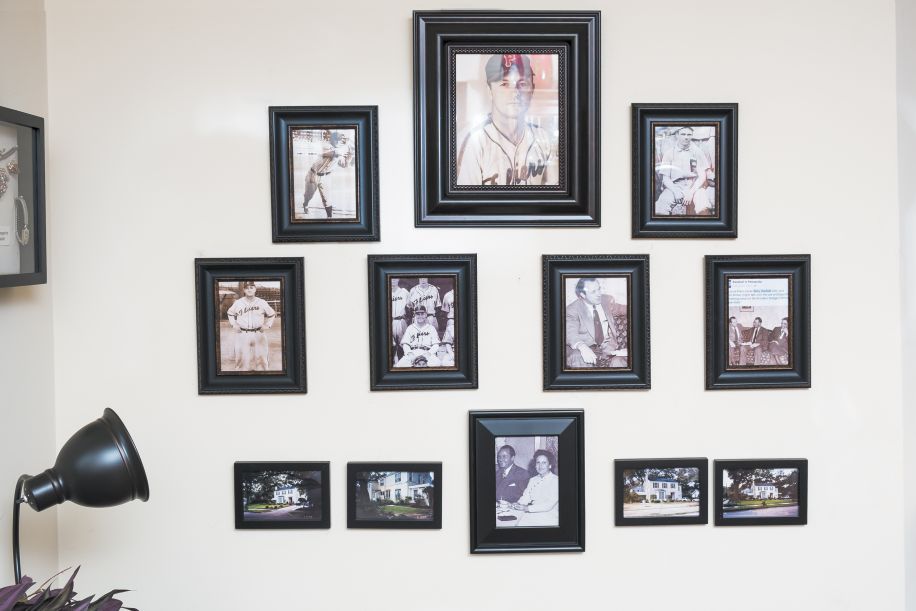 The formal dining area overlooks the lovely camellia garden and the corner china cabinets and breakfast nook give a cozy feel to the home. Virginia Dashiell designed the nook for more casual family meals. 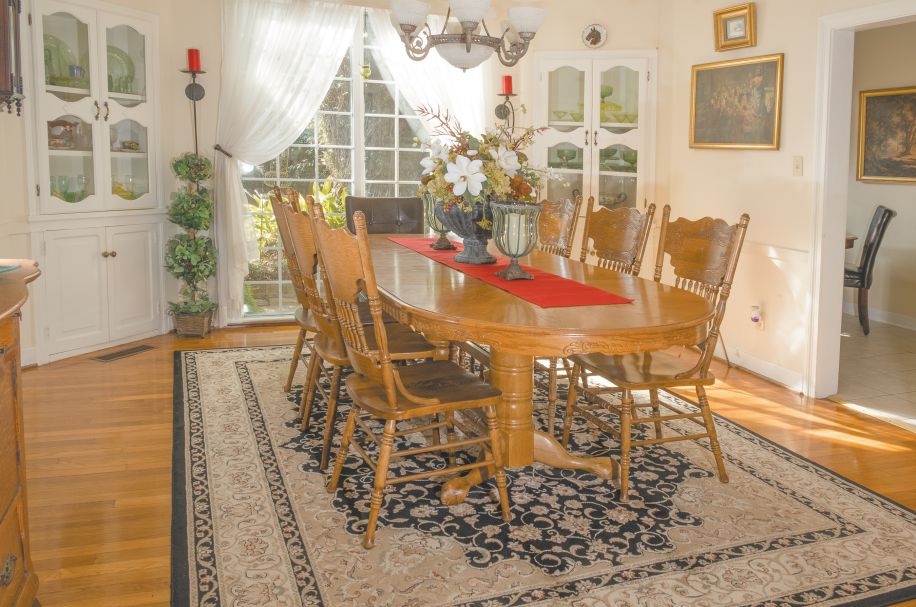 The couple’s love of antiques is evident throughout the home, particularly in the 150 year old settee from Kenny’s home state of Kentucky.

In 2016, the house received a historical plaque to commemorate its unique history. 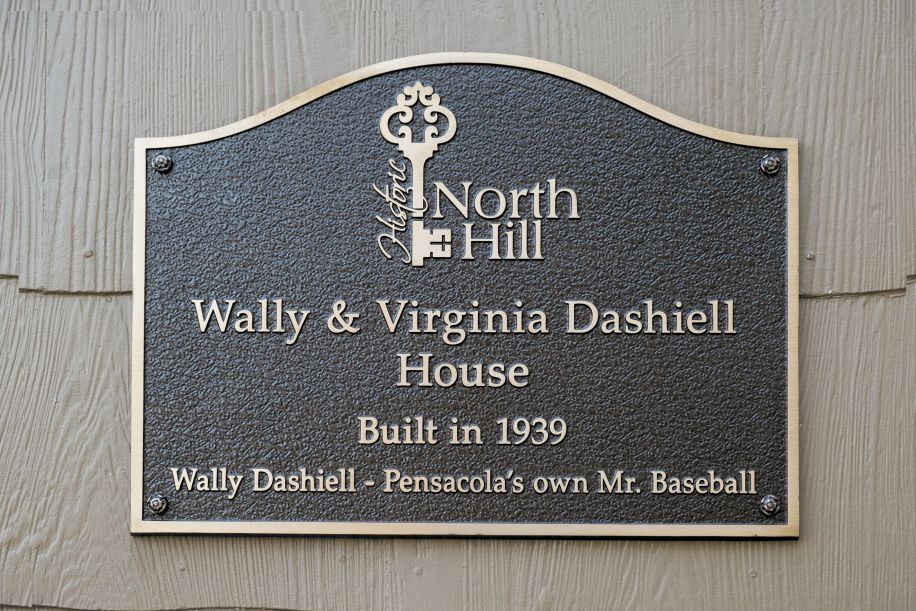 The small painting in the foyer was given to Mark and Kenny by the home’s second owner. The Dashiell’s had a similar large painting of the home. When the second owner bought the house, she could not afford a large painting so she commissioned the same local artist to do a smaller version. 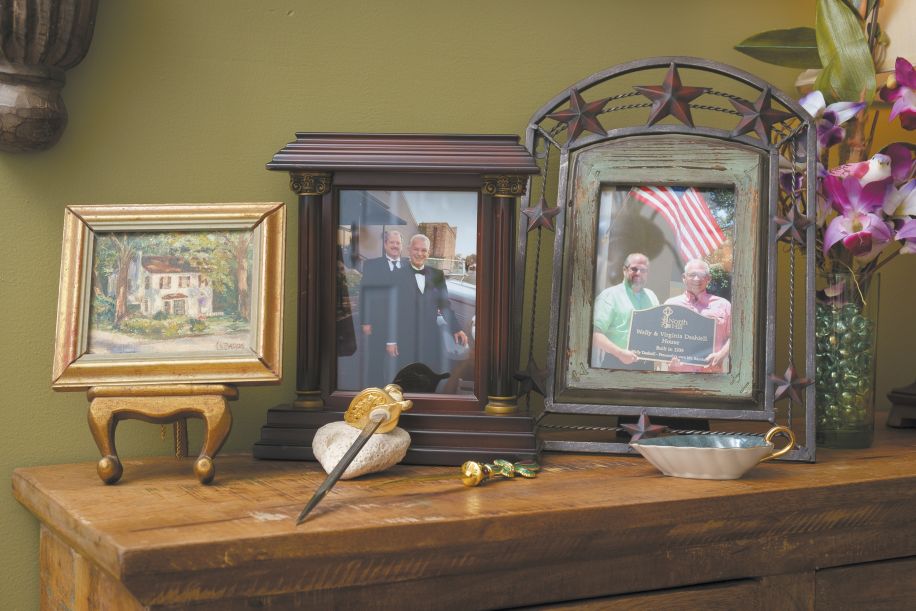 The two late 1800s dressers were purchased by the second owner at an antique auction in the1970s. When it came time to sell, she asked Mark and Kenny if they’d like to buy them and return the set to the home they spent many years in. 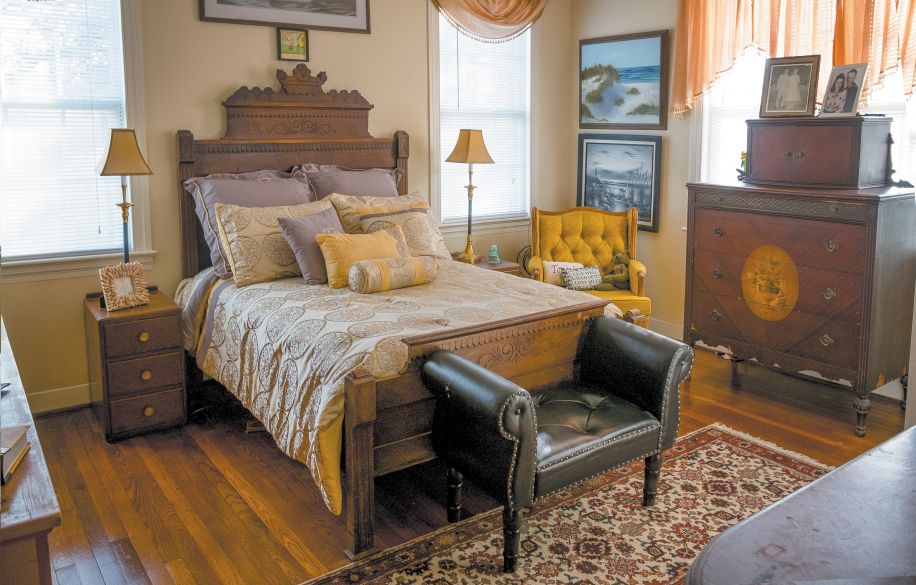 Wally Dashiell was passionate about growing camellias. The property boasts 34 camellia trees, many of which display Wally’s grafting talents with unique colors and textures. 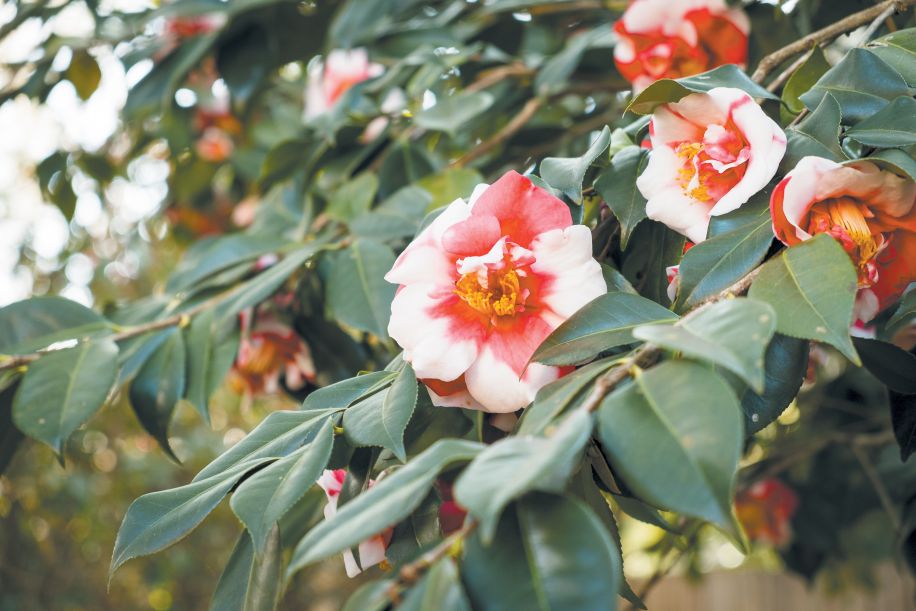 About Wally Dashiell — Courtesy of Kenny Holt and Mark McLeod

Before coming to Pensacola, Wally played baseball throughout the south and southwest in various leagues and on multiple teams, including a short period in 1924 on a Major League team—the Chicago White Sox. In 1927, Pensacola entered professional baseball with the Southeastern League Class B team the Pensacola Pilots—also known as the Fliers. They played through 1930 and Wally Dashiell was a member of that team. After playing for Pensacola, he played for a variety of teams, including the Chattanooga Lookouts, the Atlanta Crackers (a team that pre-dated the Atlanta Braves), and the Tyler Texas Trojans. He also had two more shots at Major League Baseball with the Boston Red Sox and the Washington Senators. Wally led the Southeastern Association with 50 stolen bases in 1929, and hit .332 in 1931 for the Chattanooga Lookouts. 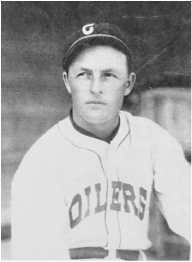 A new reincarnation of the Southeastern League brought baseball back to Pensacola in 1937 with the Pensacola Fliers—thus beginning what local historians called the “true heyday” of Pensacola baseball. Following shoulder injuries that sent him into a successful managing career, Wally Dashiell bought the Pensacola franchise and earned his title as “Pensacola’s own Mr. Baseball” by leading the team to win three consecutive Southeastern League pennants in 1937,1938, and 1939.

World War II temporarily shut down all Southeastern League baseball play and Wally was temporarily a Board Supervisor for the West Florida Office of Price Administration for the U.S. Government during the war. When the Southeastern League restarted after the war, the Fliers continued their winning streak by bringing home the pennant in 1946,1949, and 1950. Wally also integrated the stands at Legion Field in Pensacola. 1939 was also celebrated as the Centennial of Baseball and many places, including Pensacola, have dedicated August 22 as Wally Dashiell Day. 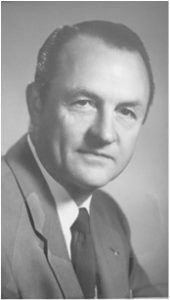 Even though Wally’s record is nationwide, he was most successful and happy in Pensacola where he and his wife Virginia built their dream home and they were happy to settle down and raise their daughter. 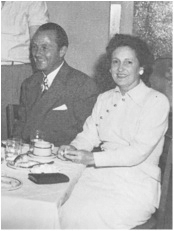