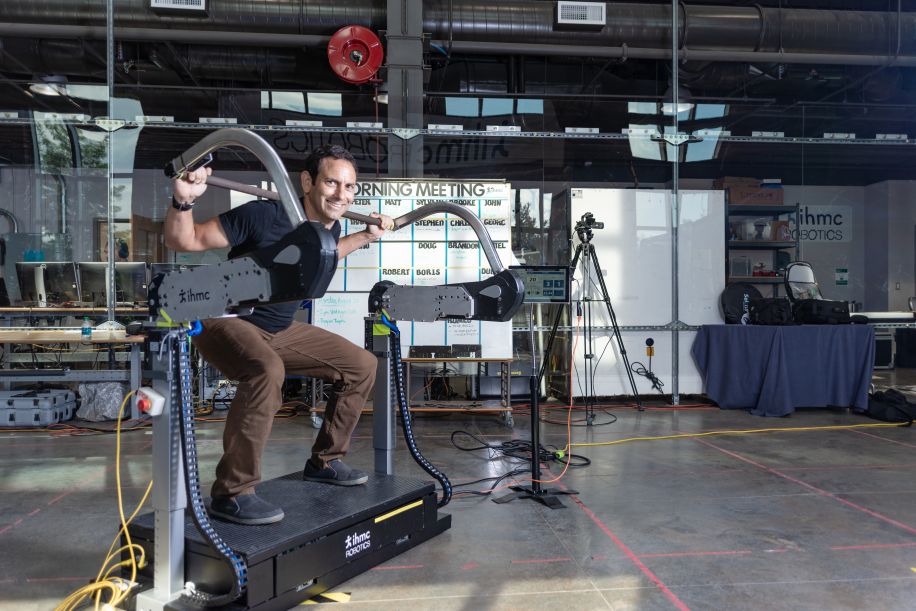 Picture yourself at the gym. Now think about stepping up to a barbell and lifting 200 pounds over your head.

A team of Institute for Human and Machine Cognition (IHMC) engineers and scientists are working with NASA to help address these issues. The project came about because the NASA has long known that astronauts on long-duration spaceflights lose muscle strength and bone density because their bodies spend so much time floating in microgravity. One study out of the University of California, Irvine, found that some astronauts lost so much bone density after six months on the International Space Station that it put them on par with older women who suffer from osteoporosis. That’s a serious problem because it puts astronauts at an increased risk of hip and other age-related bone fractures decades after their time in space.

This is where IHMC comes into the picture.

Senior Research Scientist Peter Neuhaus has put together an IHMC team to work with NASA on an exercise machine for long-duration, deep-space missions. Now that NASA is seriously considering a manned mission to Mars, the agency is working hard to figure out how to help astronauts maintain their bone density and prevent muscle loss.

“It’s important to understand that astronauts currently exercise in space,” Neuhaus said. “But they have to spend two and a half hours a day on fitness. Part of the issue is that the machine that NASA currently uses in space is massive and difficult to use. It also can’t meet the needs of a long-duration space flight to Mars.”

Neuhaus has been to Johnson’s Space Center to try out the device that astronauts use on the Space Station. It’s called ARED, and it’s a huge piece of hardware with lots of pins, gears and pulleys. It takes a lot of adjustments to switch it from one exercise to the next, which contributes to the more than two and half hours a day on fitness that astronauts have to spend on fitness in space.

“The device we’re devising requires very little time to set up and adjust for various exercises, users and weights. I believe the various exercise routines that are developed and tested with our device might also be more effective and time efficient. But that will only be determined once we do some studies with the device,” Neuhaus said.

“We’ve known for quite a while that astronauts who spend extended time in space show signs of accelerated aging,” Ken Ford, IHMC’s director and co-founder said. “But what’s really exciting is that if we find more efficient exercise methods for astronauts in space, these methods are also likely to be helpful to an aging population here on Earth.”

As Neuhaus spent more time working with NASA on an exercise machine for space, he indeed began to realize that such a device could also have important applications on Earth.

“I began to see that this device could also provide a whole new way to perform resistance training on Earth,” Neuhaus said. “Since the force is controlled by a computer and updated hundreds of times per second, we really have a new possibility for exercise scientists to develop new exercises.”

The team Neuhaus originally put together to work on the device consisted of engineers.

He explains that his team was developing a tool, but didn’t really have the expertise to know how to use the tool. That led IHMC to hire Joe Gomes, the former strength and conditioning coach for the Oakland Raiders. Gomes has spent his career working with elite athletes from around the world as well the Department of Defense.

“Joe’s experience and understanding of the science and practice of strength training and conditioning and how to improve a person’s fitness is helping us give our device the proper orientation. Joe is helping us write algorithms and interfaces to ensure our device can be fully utilized by people,” Neuhaus said.

Cobalt Intelligence, a Pensacola-based company dedicated to accelerating and developing emerging technologies into commercially viable applications, is now helping fund the development of such a device that Neuhaus says could indeed be used on Earth to provide a whole new way of performing resistance training.

“IHMC is excited about working with local investors like Cobalt,” Julie Sheppard, IHMC’s executive vice president and chief legal counsel said. “We share with Cobalt and others a common goal of growing small business opportunities and creating new high-tech jobs in the region.”

Researchers at IHMC have for the past three decades been pioneers in the development of science and technology aimed at leveraging and extending human cognition, perception, locomotion and resilience.  IHMC’s research during this time has been particularly focused on artificial intelligence and robotics as the primary means of extending human capabilities.

More recently, Ford has been putting together a team with a biological orientation to search for ways to extend the capabilities and resilience of high-performing humans such as astronauts who operate in extreme environments.

In April Pensacola philanthropist and developer Quint Studer donated $1 million toward IHMC’s research in this field. Another important gift from Pensacola attorney Fred Levin helped fund the 30,000-square-foot Fred Levin Center for Research on the IHMC campus, where the institute’s faculty and staff have been able to expand their collaborations with industry and government to develop new technologies.

Recent collaborations with local connections include an artificial reef project that Cobalt also helped fund as well as a partnership with the City of Pensacola Police Department to develop a comprehensive police drone program. The program will incorporate specialized drones in police operations such as search and rescue, disaster response, fugitive evasion, threat situations and monitoring outdoor events.

“I have no doubt that Peter and Joe and the rest of the team they’re working with will come up with a more efficient way for astronauts to exercise in microgravity,” Ford said. “But it’s also very exciting to think that because of a partnership with a local company like Cobalt that we might also be able to develop a more effective way for people to do resistance training. People talk a lot about the technology of tomorrow. Well, this project is a great example of how we’re focused on technology for today.”