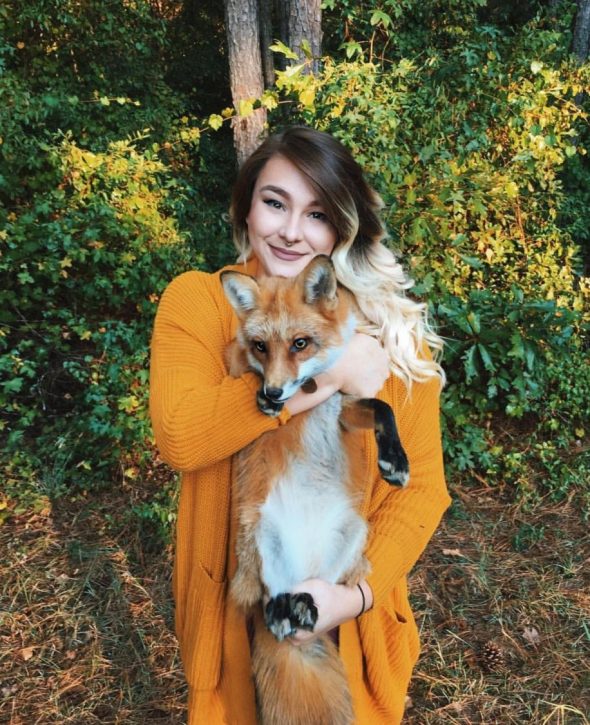 Chances are, this little fox has more social media followers than most of us would ever dream of achieving. Juniper the fox is the North American red fox who has been stealing the hearts of millions for the last four years. In that time, she’s found friends in the other animals cared for by her owner Jessika Coker.

Coker, an insurance industry jobber turned animal caregiver, has been posting about her animals, including the foxes Juniper and Fig, her dog Moose and others, for the last few years. With a whooping 2.8 million followers on Instagram, she and her animal family have become one of the super stars of the platform.

Pensacola Magazine had the chance to speak with Coker about what it’s like living with exotic animals, why she started her Instagram account and why she was so happy the day Juniper peed on her.

Tell me your story. What were you doing before you had foxes in your house?

Before the foxes came to live with me I was working in insurance at a desk job that I hated. The job itself was great, benefits, paid leave, 401k, the works, but it just wasn’t my calling and I felt as if I was wasting away there. I have always loved animals, and even from a young age I wanted to volunteer at all of the wildlife facilities and all of the shelters. My passion for animals followed me into my adult life, and whenever I was not working I was pursuing any activity I could to spend more time with them.

How did you decide to first take in Juniper and where had she come from?

Juniper came from a small family owned farm where they had a litter of ranched fox kits. Ranched foxes are descended from animals used in the fur trade, so they are unable to be released due to being so many generations away from a wild fox. They are not considered wild animals because of the differences in their genetic make up, and for those born in captivity their options are usually to become a pet, or to be pelted for their fur. This family was looking for homes for Juniper and her siblings. When I saw they needed a home I felt inclined to take one, since I knew how to care for them from past experience at wildlife centers! 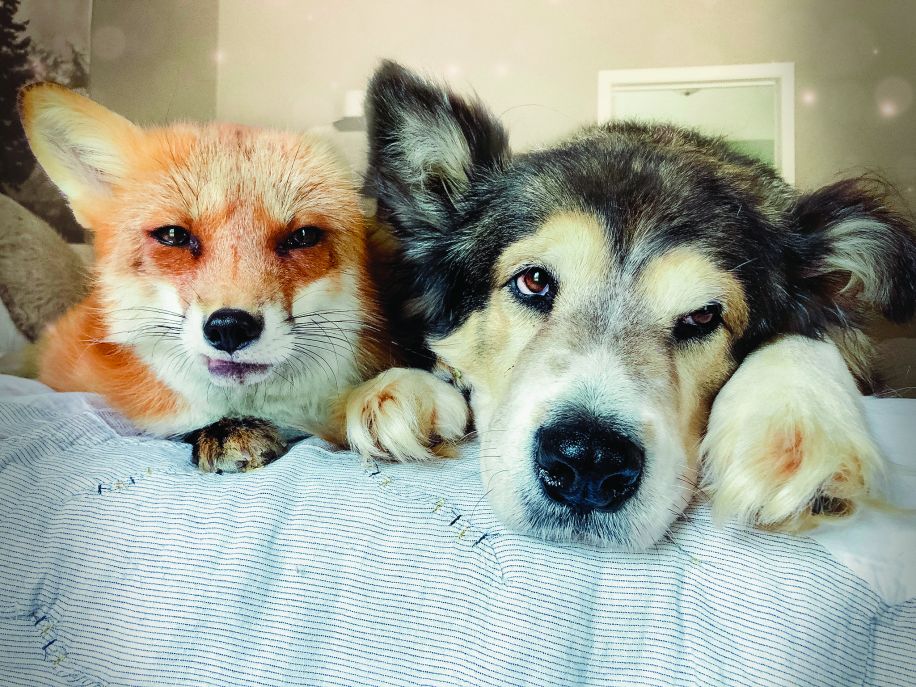 It looks like you already had a large dog in the house when you took in Juniper. I thought dogs and foxes didn’t really get along. Was that a concern?

Moose is our Malamute mix and has been a part of our family since 2010. He was brought up with many different kinds of animals coming and going through the house, as

I would rescue regularly. He’s always been a laid back dog and really well behaved.

Bringing Juniper into the house didn’t faze him at all, it was just another animal, except this one was staying.

Once you had Juniper, it looks like your family started to expand, including other foxes, sugar gliders, and even some reptiles! Can you tell me a little more about all the other members of your family?

After Juniper’s platform started to expand I took it as an opportunity to help more animals along the way. We had the support of so many people it seemed like a waste not to use that support to grow a sanctuary. Over the last three years we’ve taken in everything from puppies to opossums, nursed them back to health and found them homes.

Whether that home has been with us, with another family, or back into the wild where they live the life they always deserved. 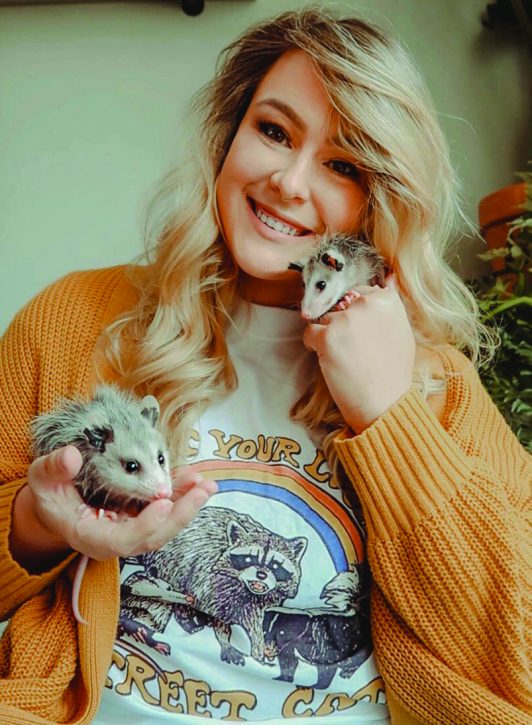 What’s it like living with so many unconventional pets? I’m sure it’s nothing like having a dog or a cat!

Living with an array of exotic animals is not always easy. Most of the animals must be kept separated from each other to avoid injuries or stress. Most of the animals we have here are also nocturnal, which makes sleeping difficult sometimes. They all require specialized diets; we don’t use any commercial pet food here, everything we feed is freshly made in-house, which can be expensive. I think many people take in exotic animals because of the novelty of having an unusual animal, but do not see the trials of having that animal before purchasing them. Most exotic pets are not trusting, they do not always want to be handled or shown off, there are licenses involved for many species, you can almost never board them if you need to travel, they have to go to a specialized vet, they need expensive enclosures, along with so many other factors that make them “difficult” to house. When taking home any animal it’s important to do your research on that animal’s needs.

How did you decide to start putting up photos of Juniper and your other animals on social media? Did you ever expect them to go viral?

I originally started Juniper’s Instagram as a way to keep up with her progress and share her daily life with my personal friends and family. Almost a year after I started her account, I posted a video of her that went viral and I started getting so many questions about her story, her life and her care. I felt morally responsible to begin educating people about the difficulties I faced raising her as well as showing that foxes have a sweet and loving nature that not many people get to witness. I think now, after four years, I’ve found a good balance between the two and I feel extremely lucky to have such a large platform to be able to educate the public about the care of not only the foxes, but so many other animals.

Tell me a favorite story about your animals, whatever memory you really cherish.

There are so many memories that I hold close to my heart when it comes to the foxes, they are such unique animals that will always cherish. One of my favorite memories is when I was traveling for a few days and left the foxes in my brother’s care while I was away. Foxes tend to scent mark their favorite objects by peeing on them, so upon my return Juniper was so excited to see me that she climbed on top of my head and immediately peed on me. Totally disgusting I know, but that’s love! 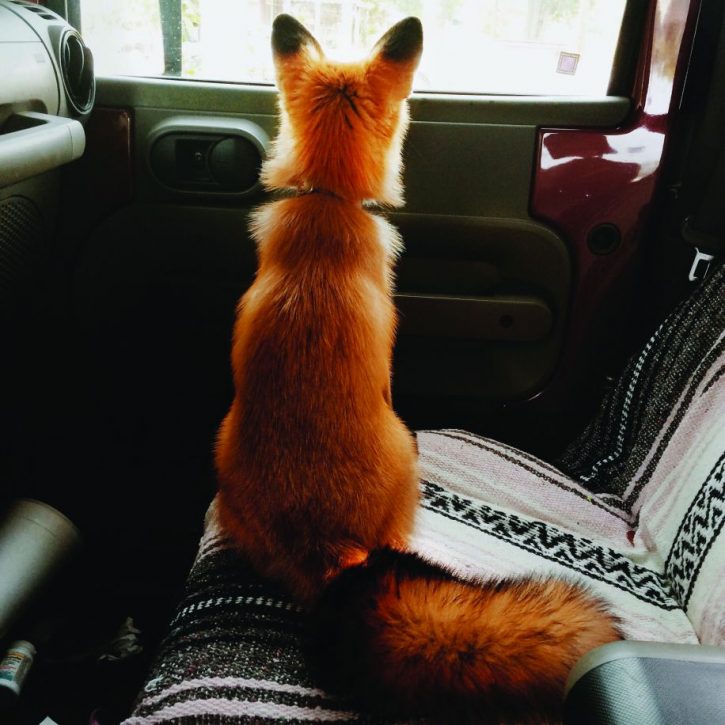 I know both Juniper and Fig came from fur farms according to your website. Can you talk a little bit about that? Do you know how many animals are killed in farms like that every year?

I’d prefer to not talk much about this subject because I have a way of demonizing this industry when I do. Which doesn’t really help anyone. It’s nice to have the trust of fur farmers that way they feel safe working with us in the future. This ensures that we can save more foxes.

I know foxes don’t typically make great pets, but do you have any suggestions for people who want to work with animals like Juniper and Fig?

For people who are interested in working with exotic animals or wildlife check your area for licensed wildlife rehabs! They can always use volunteers, especially in the spring when they are overwhelmed with baby animals. You can also check out any exotic sanctuaries local to you, they may need volunteers as well.