All the buzz heard on Pensacola Beach each fall revolves around the ITEN WIRED Summit that attracts hundreds of technology professionals, entrepreneurs, educators and students to the Hilton.

ITEN (Innovation Technology Entrepreneur Network) began nine years ago as a Pensacola Chamber event. Walton, Okaloosa, Santa Rosa, Escambia, and Baldwin counties took turns hosting it each quarter. It was a happy coincidence that the venues lined the I-10 corridor, leading many people to think that’s how the organization got its name.

The original concept was to create a forum for learning and network opportunities. IT and entrepreneurial leaders could take advantage of the summit to identify common struggles and brainstorm solutions to propel the innovation and technology industry forward. 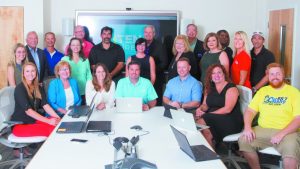 I became involved with the ITEN planning team when I moved back to Pensacola from Charlotte, N.C. At that time, I was skeptical about finding employment in the IT field. When I left Pensacola in 1997, those jobs were mostly with the federal government and required security clearances I didn’t have. I was fully prepared to turn the U-Haul around and head back to Charlotte if things didn’t pan out. The first few weeks of job hunting didn’t ease my fears. If the tech jobs were here, they were well hidden. However, I landed a rewarding AppRiver job, ending all my thoughts of retreat.

It struck me that the average person had not heard of innovative companies like AppRiver, CSC (now CSRA), Hixardt, or Avalex Technologies. They didn’t know that the Navy’s Center for Information Warfare Training was located right off New Warrington Road or that the Department of Homeland Security had a major presence here. They seemed unaware of the programs developed in local schools, colleges, and universities to build a talent pipeline to fill those high-paying tech jobs.

The burgeoning startup scene also received little attention. Great stories existed like Intelligent Retinal Imaging Systems (IRIS), Robotics Unlimited, and Accountingfly. They started to spread their wings at the Gulf Coast Center for Innovation and Entrepreneurship (now CO:lab). How could all of these exciting developments be virtually invisible to the general public?

When I assumed the role of ITEN planning director in 2013, I challenged the team to evolve the summit into an event that would bring visibility to these hidden assets and give people the opportunity to learn and speak with great thought leaders about current trends and issues facing the industry. The goal was to have attendees leave excited and inspired about what we have going on. We wanted to keep pushing the envelope to take our innovation and technology scene to the next level.

Going into my fifth year of leading the team, I could not be more proud of what they have accomplished. The summit has grown from one day full of keynote speakers and breakout sessions to a three-day event that now includes a job fair, CIO roundtable, cyber competition, and many opportunities to network with peers, speakers and sponsors. Being able to find enough speakers and sponsors has stopped being a concern. Finding enough room for what we have planned and the number of people that will attend is our new challenge.