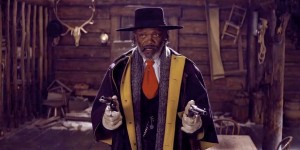 What I got from the preview: In typical Tarantino fashion, well-spoken but blunt and grisly characters are forced together by fate and must confront the secrets and pasts that each are trying to hide as they attempt to survive the wintry evening in a cabin. This throwback to the golden age of cinema—with sweeping landscapes, an intermission and overture—is a subversive western whose main plot seems to be that of a bounty hunter trying to keep his prisoner safe from those who may want her for themselves; but of course, not everyone is who they claim to be.

Most notable for: A Tarantino movie is always a treat, and this is his most overt proof that they just don’t make ‘em like they used to, with a running time in excess of three hours, old-timey title cards and 70mm showings (for which I am traveling to Birmingham).

Unqualified critical observation: I’ll admit that when the script first leaked a few years ago, I was underwhelmed. A western Resevoir Dogs?, I said to myself, before my wife asked why I was talking to myself. When the first trailer came out, I was even more downtrodden. Where’s the creativity and delightful excess that was once Tarantino’s calling card?, I asked myself again. With some early reviews and better-cut trailers, however, I am once again in the Tarantino fanboy camp, happily traveling four hours to see it in glorious, panoramic 70mm! 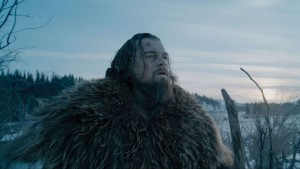 What I got from the preview: Based on the unbelievably macabre true story of frontiersman Hugh Glass, this art film features a shocking bear attack (that many early audiences have walked out on) and a story of revenge and violence told with award-winning cinematography and long, single-take shots. DiCaprio plays the titular character, who slowly and methodically follows the hunting party that abandoned him, plotting their death and comeuppance.

Most notable for: Alejandro Inarritu (Birdman, 21 Grams) has never been my favorite director, though he is certainly a celebrated one. With this film, he appears to use shocking violence and his signature story-telling patience to possibly lead DiCaprio to his first over-deserved Oscar.

Unqualified critical observation: Marketed as a breakneck-pace story of revenge and single-shot rifle gun battles, I have a feeling this is much more a slow burn than audiences expect. I’ll see it in theaters for the sweeping vistas, but I’m fully prepared for the long shots, lack of dialogue, and careful character study that generally comes with these types of pictures. 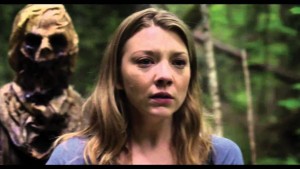 What I got from the preview: A women whose sister committed suicide travels to the location of the tragedy with the help of a tour guide. Against the warnings of local townspeople, she heads into the mysterious forest where many others have taken their own lives and confronts her own personal horror. Is this is tale of paranoia and hopelessness, like the excellent The Blair Witch Project, or another run-of-the-mill January horror release featuring a hot TV star hoping to make the transition to film? This trailer leads me to believe the latter.

Most notable for: Natalie Dormer (Game of Thrones, The Tudors) finally has her first starring role in a major motion picture, after being a scene-stealer on the small screen and the object of the Internet’s love for many years.

Unqualified critical observation: I love Dormer and hope she elevates this dreck to something watchable, even if it warrants more of a Redbox or Netflix investment than a theatre trip. With a PG-13 rating, I’m not expecting much in the scares department. 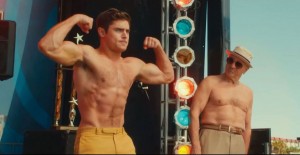 What I got from the preview: In the weeks before his wedding to a one-dimensional, uptight blonde, Efron’s character is whisked away on a spring break-like trip with his perverted retired Army general of a grandfather, and the two take part in every stereotypical douche-bro activity, because chicks and marriage can be such a drag.

Most notable for: When the most notable thing about your movie is the uncanny resemblance its title has to a Jackass movie, you should have just made a different movie,

Unqualified critical observation: With The Hateful Eight and The Revenant, my hopes were flying high that this January would be unlike most other Januarys, which are typically a dumping ground for studio garbage. With this and The Forest though, it’s nice to see that Hollywood isn’t changing up their scheduling game too much. I’ll be avoiding this one, great cast though it may have. I suggest you do the same. 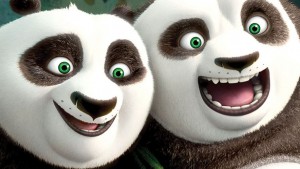 What I got from the preview: It’s been a while since we’ve seen Po, the absolutely lovable fighting panda that is essentially just Jack Black in animated form. In this sequel, Po reunites with his father as he attempts to graduate from fighter to teacher. But when a supernatural villain threatens to destroy everything Po holds dear, he must teach his newfound family the art of Kung Fu and become the master he always dreamed of being.

Most notable for: One of the three great Dreamworks animated properties (the other two being Shrek and How to Train Your Dragon) comes to an end with this iteration, and the whole gang is back together to see it go.

Unqualified critical observation: I’ve always loved these films. Their mix of eastern philosophy, bright and poppy animation, and distinctive multi-level humor mixed with a great cast is a fantastic combination. And while this story seems a bit spread out, with no clear through-line, I’ll still give it a solid Po shot.