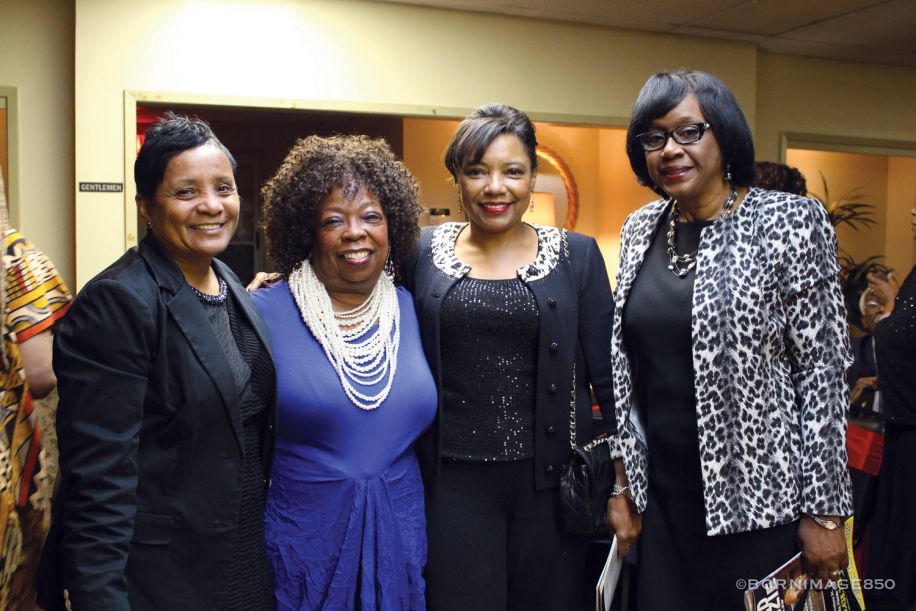 “Learning from the Past, Celebrating the Present and Envisioning the Future” was the theme of this year’s second Annual Community Awards Ceremony presented by the Gulf Coast African American Chamber of Commerce (GCAACC). The Chamber  honored local minority business leaders and owners.

The ceremony recognized business owners, business professionals and business leaders for their valuable service and involvement in the Escambia County area.

“We wanted to publicly recognize these individuals for their contributions to the community,” said Nicole Dixon, executive director of the GCAACC.

The divine Keyontay Humphries, regional organizer for the American Civil Liberties Union of Florida, co-host of the International Talk show and the Macintosh principal, was the MC for the evening. Pensacola’s very own attorney Aaron Watson, a partner of the Levin Papantonio law firm, was the keynote speaker.  The Belmont Youth Band rendered two wonderful musical selections and Eleanor Johnson cultivated us with a beautiful dance performance.

A Will & Way, Inc. (Williemae Stanberry, executive director) was the recipient for Non-Profit of the Year for their services provided in the community since 2001.  A Will & Way reaches into the jails, prisons, mental health facilities and to the homeless to serve survivors of domestic violence and their children who survive the ordeal.

Pay Cell Systems (CEO Jibril Sulaiman) was the recipient of the Community Award for the small business with six or more employees.  Pay Sell Systems is a technology company that specializes in solutions for the prepaid wireless industry.  In 2011, the platform “Cell Pay” was marketed to independent wireless stores under the company’s name Pay Cell Systems, Inc., and he soon employed 10 people and grossed over 3 million dollars a year.

Mamie Hixon was the recipient of the Business Professional Award.  Mamie Hixon is a forty-nine-year veteran English teacher with 13 years in Escambia County School District, two years at the then Pensacola Junior College and 34 years at UWF.  Mamie Hixon is currently an assistant professor of English, Director of the Writing Lab and director and creator of the Grammar Hotline at the University of West Florida.

Pensacola Improv Event Center (CEO, Mr. Douglas Baldwin) was the recipient of the Community Award for small business with five or less employees.  The Pensacola Improv Event Center has been in business for over seven years and has donated over 500 hours of free rental space to local non-profits in the Escambia County District.  Owner Douglas Baldwin has spent 35 years with the Police Department and retired as a decorated police lieutenant with many achievements and accolades.

Cox Communications was awarded Corporate Partner of the Year.  Cox, it is one of the largest broadband and entertainment companies in the U.S., providing advanced digital video, Internet, telephone and home security and automation services over our own nationwide IP network. Cox is known for its pioneering efforts in cable, telephone and commercial services, industry-leading customer care and its outstanding workplaces. For several years, Cox has been recognized as the top operator for women by Women in Cable Telecommunications; Cox has ranked among Diversity Inc’s Top 50 Companies for Diversity 10 times, including the last nine years.

In celebration of this year’s theme, “Learning from the Past,” the GCAACC honored African American-owned businesses that have been in business 20 years or more in the Greater Pensacola area.

The Gathering Awareness and Book Center started by Johnny and Georgia Blackmon well over 20 years ago and is now located in the historic Belmont DeVilliers area.

The Pensacola Voice who just celebrated their 50th years of anniversary.

Choice 106.9/WRNE 980 Radio also known as Media One Communications is owned by Robert Hill.  Since 1990, WRNE 980 has operated under the philosophy of educating, empowering and enhancing the quality of life in the community that it services.

The Dwarf Chicken Stand located in historic Belmont DeVilliers area is a family business that is currently being run by VeNisa “NeeSee” Jones.

Fredrick Gant Law Firm  started by Fred Gant (Owner) over 25 years ago and is located in the beautiful downtown Pensacola.

Saver’s Transmission was founded and owned by the late William N. Green over 30 years ago.  His loyalty, honesty and patience allowed him to sponsor many organizations in the community.  His lovely wife Sheila Green accepted the award on his behalf in memory of the great things he did for this community.

Doris Healthy Hair Beauty Salon owned by Doris Taylor has been in business since 1990.

Ray’s Soul City opened in Pensacola in 1968 under the ownership of Raymond House. Ray’s Soul City has hosted the likes of Aretha Franklin, James and Bobby Purify, Ben and Spence and many others who went on to fame and fortune.

Anthurium’s was established in 1986 by Frank Watson. Watson also the owner of Elegant Hair & Nail and Rental Rite. Watson has been an entrepreneur in this community since 1958.

The ceremony concluded with a presentation on “Envisioning our Future.”  Although the GCAACC serves a niche community, our mission is to create and facilitate equal opportunities for minorities to do business along the Gulf Coast. The Gulf Coast African American Chamber of Commerce has experienced an 80 percent increase in membership growth over the past year and a half.  Membership is open to everyone in our community. Their goal is not to encourage separation but inclusion and unity. The Gulf Coast African American Chamber of Commerce is about building bridges and connecting the community together so the whole community can experience economic growth.