From about July through the end of September, locals and visitors alike grab their snorkeling gear and head to Florida’s Gulf Coast to catch some dinner – no fishing rod required. Diving for bay scallops is a much loved mid-to late summer adventure from Gulf County all the way down to Tarpon Springs. While the commercial harvest of bay scallops is prohibited to protect the bivalves from over harvesting, recreational harvests are allowed within a specific window and in specific locations. While Crystal River, Homosassa and Steinhatchee are well known scalloping locations, Emerald Coast recreational divers can easily scallop at Port St. Joe, Cape San Blas and other locations in Gulf and Bay counties, where the season doesn’t end until September 24.  Bay scallops (Argopecten irradians) are bivalve mollusks that live in relatively shallow seagrass areas of the Gulf and its bays, particularly where freshwater rivers meet the Gulf and create the perfect climate for scallops to grow. 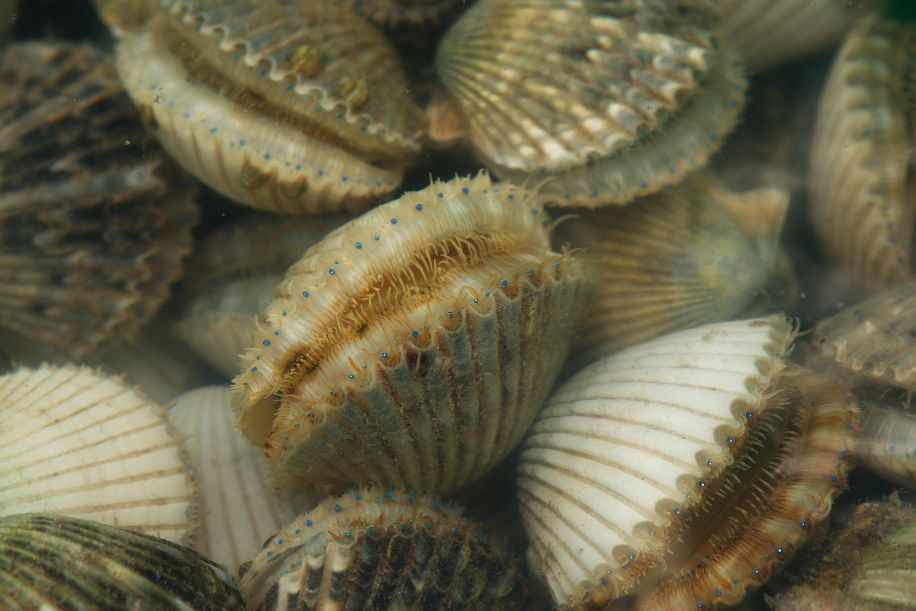 Their shallow habitats make scalloping a fun and relatively safe family adventure that can be done from shore or by boat. All you need are your snorkels, masks, saltwater fishing licenses, a mesh bag or net and a diver down flag.

We spoke with Ryan Gandy, a researcher who oversees the shellfish research section for the Florida Fish and Wildlife Research Institute. Gandy oversees the research and monitoring for oysters, scallops, stone crabs, Blue Crabs and horseshoe crabs.

How did commercial scalloping come to be prohibited?

In the early 1990s, there was a commercial fishery operating for scallops, but the population declined severely, and the fishery was shut down. Since that point, as populations have recovered, we have opened and expanded recreational scallop fishing – primarily in the Big Bend area. In recent years, we’ve been able to increase either the amount of time or the area allowed for recreational scalloping.

Tell me about the life cycle of a scallop.

This is the thing about scallops – and one of the things you have to remember – they are not your traditional fishery. Many fish classes have multiple generations of fish, but scallops are an annual crop. Scallops live about 18 months. They spawn in fall and early winter. Those larvae will set on the bottom and grow up. They have only one year to where they’re ready to spawn again. And that’s it. Once that spawning population is done, you don’t have other tiers of spawning populations. So that creates a highly variable population from year to year. A great example is St. Joe’s Bay. It was kind of puttering along. We had decent populations there, but suddenly, they went from say six scallops, in a transect area to 66. So, basically an order of magnitude higher in one season. Then this season they dropped back down to where they had been before. They can have high variability. They are on about a five to seven-year cycle. After several years of good numbers, the population starts climbing for four or five years and then it hits the bottom again. 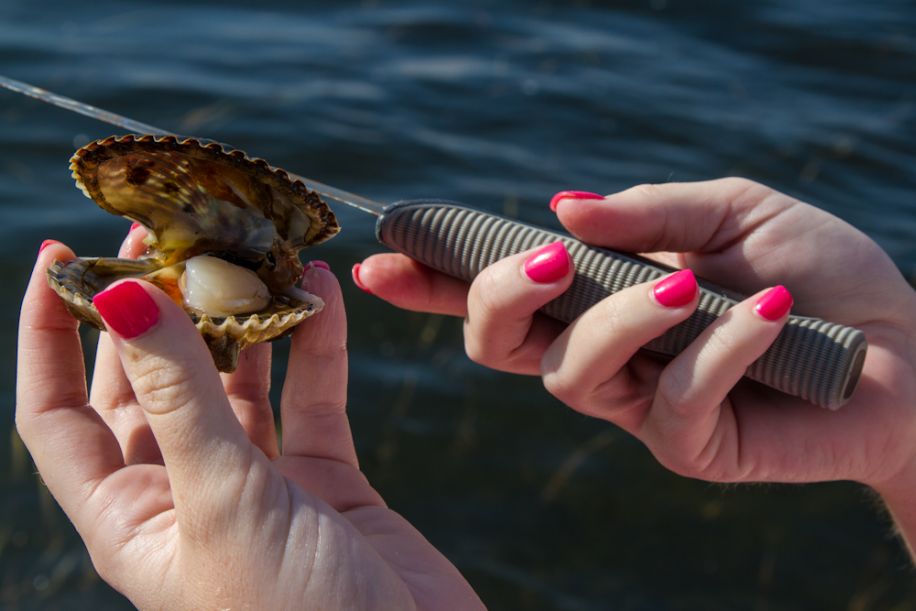 What will happen in that period are some good environmental conditions that may push all the larvae into a retaining area. They are pelagic larvae, so for a couple weeks they’re up in the water column getting dispersed by currents and tides and winds. What happens is you can have scallops that are spawned in one county that end up in another county, and that’s how you’ll see high differences from one area to the other. So that all leads to the high variability with scallops from year to year.

This is a natural product – a naturally occurring resource. Given its life history, it can make it so that you can’t always go out there and get a limit just because the population is not there. That doesn’t always mean that next year is not going to be a good year because scallops are highly fecund. They have lots of babies. They are a hermaphrodite. It’s not good for them to self-fertilize. But being able to spawn both types of gametes gives them higher productivity. With other species, you might have too many males in the population or too many females in the population. With scallops, you don’t have that issue. And with the volume that they can produce, as long as the larvae are retained in the area that they’re spawned and don’t get blown off shore, you can go from what appears to be no scallops in an area to a very good year the next year.

Most scallops die naturally in the winter following their spawning. They’re kind of a live fast, die young species. We have that with a lot of invertebrates. They rely on a high amount of reproduction. Scallops, crabs and shrimp are kind of the potato chips of the sea – everything likes to eat them.

How do other sea creatures eat them?

Scallop shells are very weak. If a stone crab grabs one, they can just crack them. If a blue crab gets it, it may crack the shell, or it may try to pick at it until it opens it up and gets to it. With rays, they suck the scallop in and crush it inside the plates in their mouth and then they pull out the good stuff and spit the shells out.

Scallops have unique eyes—30-40 each. What can you tell me about them?

You’ll see the blue eyes along the outside edge of the shell. They are pretty much for light sensing. When a shadow goes over them, they’ll try to close up or shoot away. When they clasp their shells together, the water will shoot out like a jet and that’s how they can propel a little further away. It’s not really designed for getting away from things that are pretty quick like stingrays or people, but if a big horse conch or a stone crab came around, they can clap that valve together and have a chance to get far enough away.

What advice do you give recreational scuba divers going out to scallop for the first time? 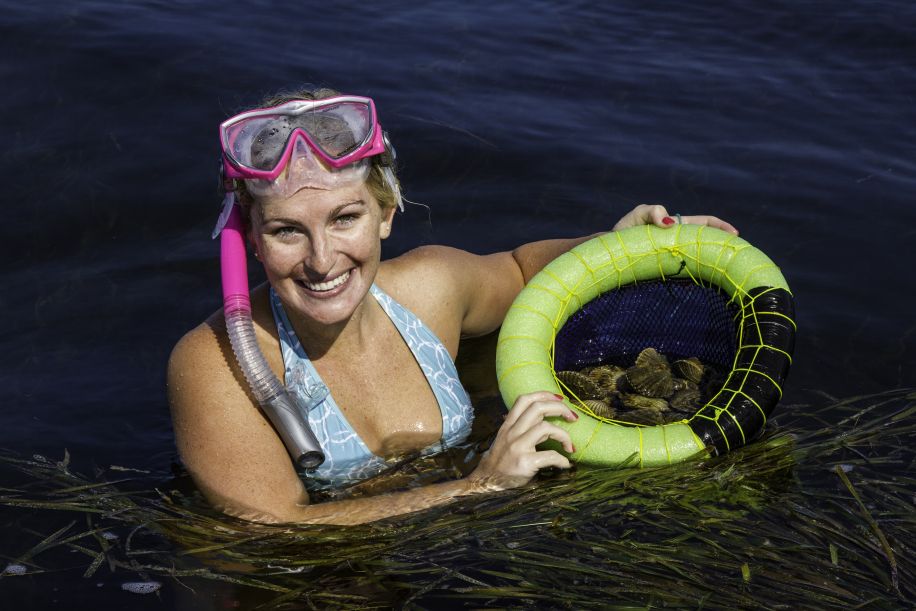 Scallops are directly tied to their habitat – seagrass. Divers should be very careful of how much scarring they do to the seagrass because without the seagrass, the scallops don’t have anything to set to. We want to make sure that as the population increases and people are using the resource more that they are also protecting it. That’s a very simple way – turning your motor up, having good charts. That kind of thing.

Also, we do want to try to preserve the population throughout the season, so if you’re not going to eat the scallops or you’re just out there to collect them and pick them up, try to manage what you take so that you’re not taking more than what you’re going to eat. Other than that, just have fun and enjoy all the other critters you see out there, too. There’s a lot to see on the scallop floor once you get out there.