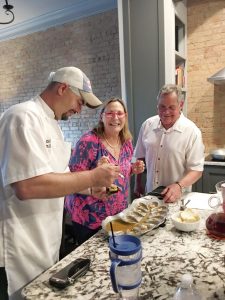 By DeeDee Davis—Lucy Buffett is the first to admit that there hasn’t been a whole lot of stability in her life, but my goodness, there have been adventures. So many adventures. Her latest endeavor, Gumbo Love: Recipes for Gulf Coast Cooking, Entertaining and Savoring the Good Life is far more than just another cookbook. Seasoned with personal stories and anecdotes, the book reads more like a biography than a “how to.” There are plenty of mouth- watering recipes to try but the emphasis on gumbo comes from all that is represented by this pot of goodness. It has become her signature dish in her restaurants and though the cookbook calls for celery, onion, seafood and tomatoes, there is also a huge dose of other ingredients you wont find on those pages. You see, unless you add history, geography, ancestry, hard times, and a whole lot of love, your gumbo wont pass the test and is just another stew. Savor is the magic word for a bowl that she serves. Consider this bit of info about the author and the next time you visit LuLu’s, take a special second to close your eyes as you try that first taste and appreciate how the blend of nature and time can result in something so delicious.

Lucy was born in Mobile to parents who both worked in the shipyard. Any mom will tell you that working a full day and then going home to three kids does not make you want to spend long hours in the kitchen preparing dinner. She lived in a pretty progressive family, considering it was the Deep South in the 1950s and 60s as her dad shared in the meal preparation. They still managed to all sit at the table nightly. Sundays were usually spent with one of her grandmothers, both of whom enjoyed cooking. One grandmother cooked boarding house style, while the other was far fancier. Whether sharing a buffet of vegetables or donning gloves and a hat for crab etouffee, the Buffett kids were exposed to a lot in those early years. Lucy was the one, however, who loved to stand next to her grandmothers in their kitchens, thankful for the chance to scrape the bowl or add an ingredient.

Her professional life was as varied as the many gumbo recipes in her book. Like many Southern mothers, her own insisted that she learn “office skills” so that she would always have something to fall back on. And she did have plenty of office jobs. What she really loved, however, was entertaining. Brother Jimmy, a bit talented in his own right, hooked her up with Harrison Ford to cook on his yacht for a week. Mr. Ford had a reputation for being demanding of his chefs, but Lucy didn’t mind a challenge. He preferred Thai food, which she learned to prepare, and she introduced him to New Orleans style food and a week turned into a year. Thus, her first paid cooking job. 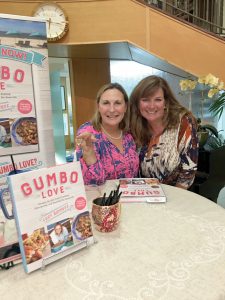 Wanderlust called and Lucy moved to Los Angeles and thought she had arrived in heaven. She worked in production for 10 years and planned to stay forever but fate intervened and her mother got very sick. The phone call we all dread took her back to Alabama jobless. But, as luck would have it, an acquaintance asked her to take over a former bait shop turned hole-in-the-wall restaurant and the rest is painful history. Lulu’s Sunset Grill was born, not necessarily out of love of cooking but need for employment. Word of her magic in the kitchen spread quickly and her tiny grill was packed regularly. Fast forward and in 2001, at age 46, Lulu’s opened in its current location in Gulf Shores, Alabama. An instant success, there were still glitches. Opening night her chef was a no-show and they had to use a copy machine to make basic menus. The simplicity is part of the lure to her restaurants. She opened a beautiful farm to table restaurant a few years ago that did not last long. She and her brother both have found that niche that appeals to people everywhere. You may not live on the Gulf Coast, but in your mind you can always find stress free warmth, sand, flip flops and margaritas. Lucy says it’s mind blowing to her that her lovely restaurant wasn’t a success but that people will stand in line for hours to sit outside and order fried shrimp and beer.

Gumbo Love represents classic Gulf Coast. A lot of lessons come out of even the best of recipes. Patience, willingness to start over, gratitude. Simple, but so important. Lucy has had her share of ups and downs, but this self-empowered woman is happy in her own skin. She has a second Lulu’s in Destin and another is scheduled to open soon in Myrtle Beach, South Carolina. She swears this is the final one.

We’ll see about that. There’s always another pot to be made.