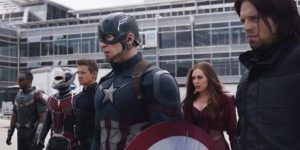 What I got from the preview: After the events of Avengers: Age of Ultron and realizing they miiiiight just be liable for about a gajillion dollars worth of damage and thousands of lives being lost, the assembled Avengers split into two factions: one led by Iron Man who believes that their interference in international affairs should be scaled back significantly, and Captain America, who, much like America itself, wants to continue “keeping the world safe.” The rift creates a civil war which inevitably will cause even more collateral damage and cost more lives.

Most notable for: Between the cast’s breadth and the immediate continuation of the Age of Ultron story, this movie could almost be Avengers 2.5. Stand-alone Marvel movies are usually largely forgettable, but this one promises to be anything but.

Unqualified critical observation: Finally, these characters are growing up and realizing the consequences of their actions, no matter how unsavory it may be. And while fighting each other in spandex may not be the most adult approach to remedy conflict, this film looks to finally balance the childlike fantasy of its characters with the mature, real-world repercussions of their decisions. This may be the best Marvel movie yet. 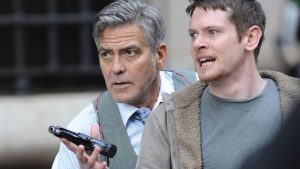 What I got from the preview: The trailer starts out with Roberts’ character ordering an evacuation of a television station’s employees after a gunman has taken the show’s host (played by Clooney) hostage with a bomb-strapped vest. We soon learn that there is far more to this story, as the gunman was an investor who followed Clooney’s advice and lost everything and whose violent actions are being broadcast live from the studio for millions to see. Some sort of conspiracy involving global markets and high-frequency trading follows the tense standoff as (trailer spoiler) the hostage and hostage-taker become unlikely allies.

Most notable for: It’s not often during the summer that old-school movie stars are given charge of an original property. Let’s support more films like this.

Unqualified critical observation: A product of the Occupy movement by director Jodie Foster, the trailer gave me chills and found a happy medium between summer thriller and thoughtful societal commentary. 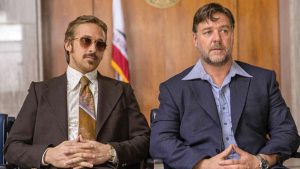 Most notable for: Gosling and Crowe are among the most likeable actors on the planet, and their drunk bit from the Oscars hints at their obvious chemistry. Unfortunately, that’s where the movie’s positive aspects end.

Unqualified critical observation: You’ll forgive me if the superimposition (from the director of Iron Man 3) doesn’t exactly instill me with confidence. If the same material were handled by a more assured director, it might work in a winking, Boogie Nights-type way. As it is now, the movie seems preoccupied with insisting on its own cleverness and in the process derides any charm it may have otherwise earned. 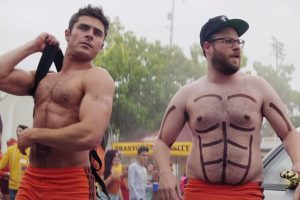 What I got from the preview: In the sequel to the surprisingly great 2014 movie, Mac (Rogen) and Kelly (Byrne) attempt to sell their house when a sorority moves in next door. Quickly realizing that no one will want to undertake a 30-year mortgage on a property located right next to the debaucherous bunch, the two enlist the help of former frat bro Teddy (Efron) and his band of goons to excommunicate the next-door sisters.

Most notable for: See, these are the kinds of movies to which I actually want a follow-up. The original can stand on its own as a laugh-out-loud classic, but the characters are endearing and enduring enough to warrant another adventure. Good on Hollywood for green-lighting a sensible sequel.

Unqualified critical observation: Rogen and Efron have startling chemistry, and Grace Moretz is playing against type as a pot-smoking bad girl. The rest of the cast is filled in with terrific character actors and emerging presences in the comedy world. I’m excited for the late-night laugh fest this movie promises to be.

ALICE THROUGH THE LOOKING GLASS 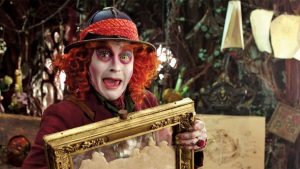 What I got from the preview: Did anyone actually like the 2010 prequel to this movie? It was stylized color vomit masquerading as a whimsical, star-studded approach to Lewis Carroll’s nonsensical cocktail of fantasy elements to which much deeper meaning has been ascribed. The follow-up continues in that creepy tradition, with Depp as the Mad Hatter who serves as our quirky guide and Wasikowska as our audience proxy. In this iteration, we must travel back in time with the residents of Wonderland to save the Mad Hatter. Personally, I wouldn’t bother.

Most notable for: I assume the sprawling cast is drawn to the idea of dark fantasy and an easy couple-millions, and while I applaud them for attempting to tackle the difficult source material, I can’t help but think it’s more style than substance. Also, this is one of the great Rickman’s last films. Pity.

Unqualified critical observation: Depp is a lot like Adam Sandler in that he plays characters who are stuck in prolonged adolescence with a dialed-to-11 fervency that no longer seems authentic. In that way, he is an analog for this franchise that purports to be about more than it is, when at the end of the day it’s just a CGI-laden cash grab, the victims of which are families seeking quality entertainment and the Hot Topic crowd, looking for an artful rendition of their supposed misunderstood feelings.