Here at Downtown Crowd, we love to cover big touring bands that come through the city. However, we’d be remiss if you did not cover our local music scene, with its wide array of genres and people. One of those bands is Jimmy and the Jimbos, and this month they are putting on a show to remember.

On Dec. 22, Jimmy and the Jimbos will be holding their EP release show at The Handlebar. The EP, titled The Jimbo ep(ic), is the band’s first official release of what they hope is many. 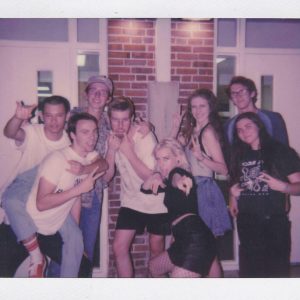 “We’ve been writing together since sophomore year of high school,” said Ryan Post, who performs vocals and piano in the band. Post is in several other local bands such as Crystal Coast and previously Morn Mongata.

Along with Post is AJ Atkins, the vocalist and guitarist for the band. “We actually played a set in Tallahassee as The Nobodies, and then we kinda dissolved, and then we got back together as Jimmy and the Jimbos two or three months ago,” said Atkins.

Aside from Atkins and Post, Jimmy and the Jimbos is an ensemble band with 9 additional members: Samantha Stott on drums, Nate McManus on guitar and trumpet, Bridgette Kelly on bass, Ian O’Brien on synth, Catherine Lambert on flute, Ally Post on violin, Amelia Valesco on viola, James Smith on percussion, and Grant Caillouet on samples.

“We had a vision since starting the band to incorporate a lot of musical instruments,” said Post. “I think it’s really good to just build the instruments to get a really big sound,” said Atkins.

Atkins and Post said the band is mainly influenced by twee and baroque pop like Belle and Sebastian, but they also admire other ensemble bands like Arcade Fire and Broken Social Scene. “I’ve always thought it was cool how Arcade Fire would drag along a big squad. It’s also just kinda fun to have all these members, and it’s all people that we were friends with beforehand,” said Atkins. 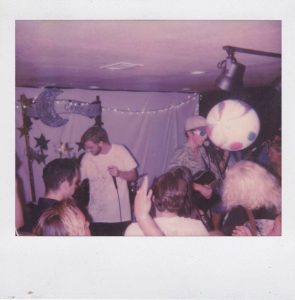 The band is currently in the process of recording The Jumbo ep(ic) in time for the release show. Post and Atkins said the EP would feature the first four songs the band started playing together and have had the most time to refine. Post said after the EP’s release, they are going to work on releasing the best debut album they possibly can. “The LP will come out—however long that takes. We’ll probably release another EP, maybe a split in the meantime,” Post said.

“Personally, I just writing songs, playing them, getting everyone together. If we get famous, that’d be cool,” said Atkins. “We’re just doing it to do it, though.”

Jimmy and the Jimbos’ EP release show will be held on December 22 at The Handlebar at 319 N Tarragona Street. Supporting Jimmy and the Jimbos are Kent Stanton, Satan and the Sunbeams, Feed Lemon and Hotel Capsule. The show starts at 8 pm, and the $5 admission gives you a free download code for the EP. For more information, visit facebook.com/pensacolahandlebar.