At the Apple Market, you expect to find certain things. Apples, tomatoes, chicken and even some canned food. What you may not be expecting to find is a small art gallery next to the deli. Surprise! The gallery features several local artists throughout the year, but there’s a very special gallery happening right now courtesy of Apple Market’s tomato vendor Joseph T. Cunningham. They aren’t his artwork, but they did come from his attic.

After purchasing the house 22 years ago, Cunningham found paintings left behind from the previous owner. The paintings were from the 1950s to 1970s, the work of the original builder of the house Fred Gustave Hassebrock. Now, he’s decided to share these incredible pieces with customers of the Apple Market, featuring one of Pensacola’s vintage artists.

Hassebrock was born in Missouri in 1903, where he lived with his grandparents for many years. During his school years, he learned half of the time in English and the other half in German. He then moved to Pensacola, where he worked as a farmer. Due to the hard work needed on the farm, he stopped attending school, but there was one thing he never stopped. He sketched, he drew and he painted. Later on, he would be hired by the shipyard then the Naval Air Station to work as an illustrator drafting maps and house plans, a skill he learned with no formal training. He died in June of 1978. 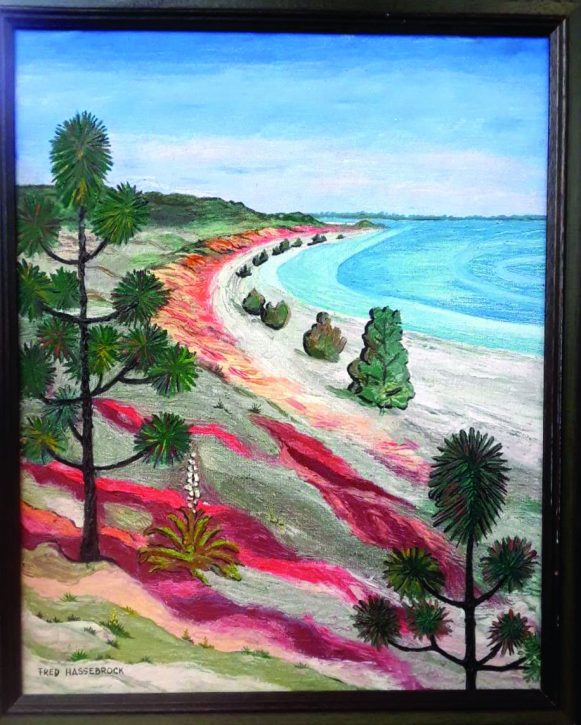 Although never formally trained as an artist, Hassebrock was extremely proficient at his artwork. He served as president of the Pensacola Art Club, taught classes from an art studio he had built behind his home and was even hired to help decorate the San Carlos Hotel according to his daughter Mary Ann Johnson.

“That was his hobby. I very seldom ever saw him ever sit down and watch TV in the evening or anything like that,” she said. “If he wasn’t working on a house plan or something for somebody else, he would paint. He would go out and start his pictures in the outdoors where he’d sketch them from sight. Then he would bring them back home and finish them at night.”

Most of Hassebrock’s work centered around Pensacola and things seen in Pensacola, Star Lake, the San Carlos Hotel, the train station, the old pine trees on Scenic Highway. He used a palette knife for almost all of his later works, including the paintings on display at the Apple Market. Johnson said he enjoyed the three-dimensional effect of using the knife versus using a brush, though sometimes he would use a brush as well.

During the Great Depression, he was hired to create artwork for the National Art Museum in Washington D.C. as a part of government programs to find work for people. Johnson said he was sometimes featured in one-man art shows and recently had a small art show in Molino, Florida. Since his passing, he has also been featured at the T.T. Wentworth Jr. Museum of Art in downtown Pensacola.

This latest gallery at the Apple Market is part of an ongoing project to uplift local art and artists at the locally owned grocery store.

“We’re a gallery of local artists, so that’s the first requirement and he was local,” Karen Sargent, the manager of the art gallery, said. “Secondly, I wanted the art to be unique, emotional, speaks to your heart. That art right there is all about that.”

The gallery featuring Hassebrock will be ongoing through July, with many of his paintings for sale. Cunningham has said he has 50 to 100 paintings to share and Sargent said the gallery will change as pieces are sold and Cunningham brings in new work. The feature painting is of Star Lake and is the largest of the paintings Cunningham found in the house.