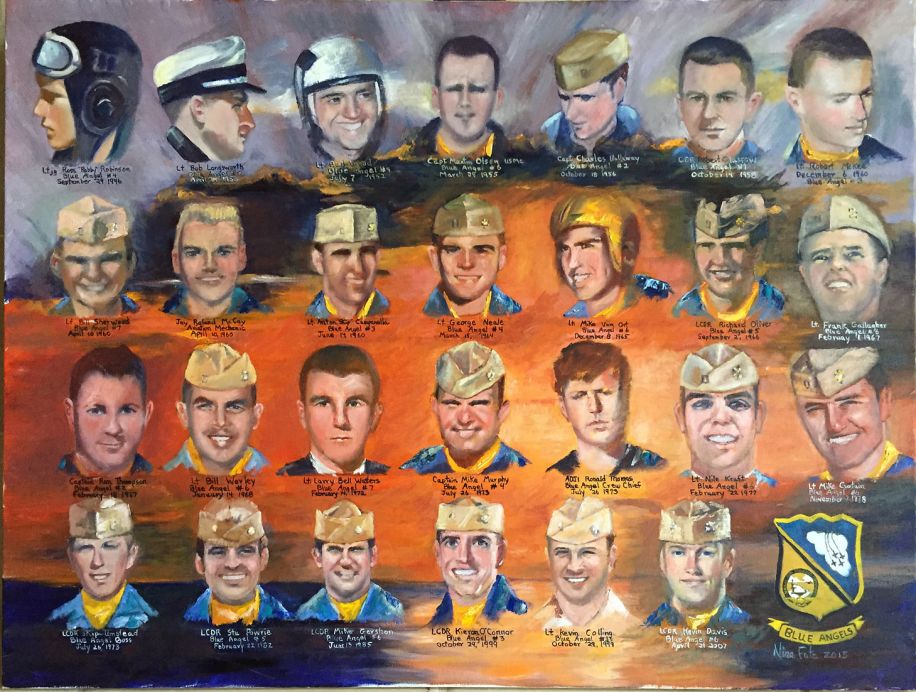 Imagine this: you’re spiraling through the air, leaving Cuban Eight contrail clouds in your wake, and the crowd below goes wild as you recover swiftly from a downward dive.

The excitement of being a world-famous Blue Angel, a job that may sound like a dream come true for some dare devils and aspiring pilots, is tempered only by the risk involved in aerobatic maneuvers that leave no room for error.

Since the squadron was formed in 1946, 27 Blue Angels have lost their lives in the line of duty. At least 50 more have suffered injuries from practice runs and performances.

Mark Tedrow, a history major who’s also been a fellow Blue Angel for five years, was prompted to learn more about the squadron’s past and those who were lost along the way. He discovered statistics that revealed a 10 percent fatality rate for Blue Angels pilots over the past 61 years.

“I was disappointed to find there were no memorials for those who had died,” said Tedrow, Blue Angel #5 and lead solo/operations officer. “At the minimum, I wanted to do something that would give those pilots the recognition they deserve. So, I began to think, what can I do? What would be appropriate?”

A photograph of the Blue Angels as a group, still hanging on the wall of The Grand Marlin at Pensacola Beach today, inspired Tedrow’s next move.

Tedrow reached out to local portrait artist, Nina Fritz, who has created several Blue Angels paintings and posters over the past 15 years.

“I was honored when Mark approached me about painting a memorial for the Angels who had died,” said Nina, who is renowned for her portraiture as well as her Blue Angels artworks. “Mark’s time with the Blue Angels is coming to an end, and he told me every time a pilot leaves the team he leaves something behind. This painting is what Mark wanted to leave the team. Of course, I said yes without any hesitation.”

What became dubbed later as “The Blue Angels Memorial Project” took Nina roughly a year to complete after she began creating the painting in fall of 2014.

The first step was getting headshot photos of the deceased pilots for Nina to get a sense of each Angel’s unique facial features.

Tedrow took it upon himself to research and find photos of the 27 fallen Angels using resources such as squadron archives and Ancestry.com—an online site he used to track down and reach out to family members of at least eight pilots who were missing photos in the squadron archives.

Some of the photos were blurry and of poor quality, which made it difficult to render distinguishable characteristics for the portraits. Despite the challenge presented to Nina, the finished product displayed recognizable faces of the fallen.

“During the entire process, Mark was very involved and visited my studio often to check on the progress of the painting,” said Nina. “Near the end, I was very pleased to hear he recognized each pilot I had painted from his research. It made me more confident that family members and loved ones would recognize them, too.”

Laid out on a 46 x 36 canvas, the Blue Angels memorial painting was created using water-based oil paint. The pilots were painted in order according to the year in which they died, and each of the 27 faces are set on a background of a fading sunset on the water.

As for the painting’s frame, Tedrow knew of a friend, Justin Gonzalez, a former Navy SEAL and Leap Frog parachuter who happened to be a woodworker on the side. Gonzalez agreed to design a custom walnut frame for the painting.

The painting was unveiled as a surprise to the rest of the Blue Angels squadron on Nov. 8, after the team’s annual Homecoming Show.

Tedrow is in the process of getting smaller copies of the painting to surviving family members of the 27 pilots.

“The important thing is that we never forget those who were lost,” explained Tedrow. “It’s also important to note that because of what happened to those 27 men, we have much safer demonstrations today. From 1973 to 2015, there were not nearly as many casualties and the safety margin has become much greater.”

The Blue Angels memorial painting will find its permanent home at the Naval Aviation Museum on NAS Pensacola, where the fallen Blue Angels will find their place in history and, most importantly, where they will not be forgotten.