It’s no secret what children desire most. They want to stay up late, eat junk food, watch endless cartoons, never go to school and go wherever their imaginations lead them. While it might not have been possible in real life to grow up getting everything you wanted, ever wonder what it would be like if you had? For one iconic girl with red pigtails, exuberant blue eyes, and mismatched stockings the dream is all too real in Pensacola Little Theatre’s performance of Pippi Longstocking. 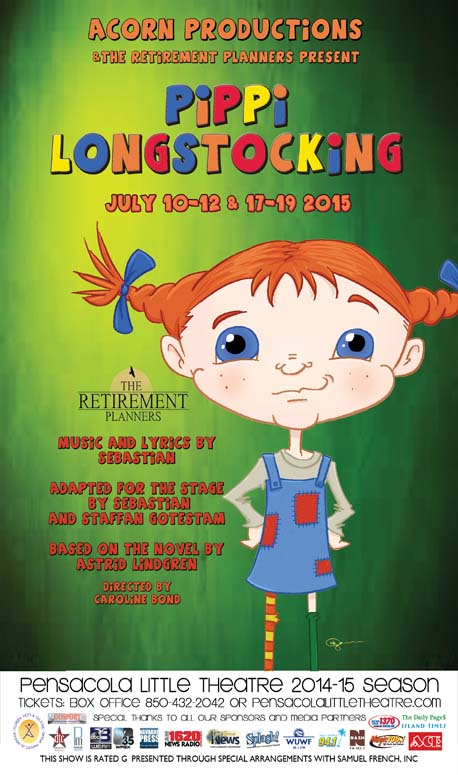 A classic tale brought to life by a young child’s imagination, Pensacola Little Theatre’s version of the play, written by Samuel French, will be performed July 10-11 and also 17-19 as an Acorn production. The story is a captivating, playful, and high-spirited play about a young girl named Pippilotta-Delicatessa-Windowshade-Mackrelmint-Ephraim who finds herself involved in all sorts of fun with a twist. She owns a monkey and a horse, runs the house as she sees fit, doesn’t attend school and loves to dance, oh, and her father’s a pirate! If the silliness isn’t enough for an entertaining time, the production is also a musical number and audience interactive.

“Acorn productions are made to introduce young children to the theater whether they are in the audience or in the actual show,” said Caroline Bond, the director of the show. Bond is also a senior in high school and one of the youngest directors to ever run a show at the Pensacola Little Theatre. “Pippi is different because it is a larger production, being a musical. When we chose the show we were looking through all of our options, and we came upon the Pippi Longstocking musical. When I was little I used to read Pippi Longstocking all the time. It was one of my favorite books so we thought, ‘well, this is perfect!’”

Auditions for the cast took place May 11 and 12 and call-backs occurred the next day. The directors were astonished by the turn-out. Around a hundred adults and children lined up both days to audition, the largest crowd for a children’s performance in Pensacola, making the decision of who would play Pippi a challenging one requiring extra monologues, songs, and Pippi’s signature dance to narrow down the competition.

“We had so many people we couldn’t figure out who to put where,” Bond said. “We had to have call-backs the next night on Wednesday, especially for the people who were trying out for Pippi. We had them read one of Pippi’s monologues that perfectly shows who she is. When we read that one monologue Zas Pitre, who was cast as Pippi, was the only one who nailed it with all the three parts. Her dancing was really funny because Pippi’s not really a choreographed dancer, she’s just crazy and she nailed that. When she sang she was really good, and when she did that monologue it was a perfect fit. It was exactly what I pictured in my head.”

Zas Pitre is an eight-year-old girl who already has a passion for acting and the theater. Her father Stephen Pitre is also acting as the character Constable, making the musical even more special.

“I think it’s a good experience. I’m doing a lot of things that I’ve never done before,” said Zas. “We’ve never been on the stage together, it’s our first time and we’re really excited.”

On stage, Pippi and the Constable are constantly at odds with each other and that’s where the relationship of father-daughter becomes a source that the two actors can draw on during the performance. “There’s one scene where the Constable and Pippi are in a big disagreement where he says, do what I say and Pippi does not want to do what he says. It’s a tug-of-war so to speak, a battle of wills. In some ways the father-daughter relationship does help us get into character,” said Stephen.

Stephen and Zas Pitre are not the only family-duo to be involved in the performance of Pippi. Bond and her mother Lisa Bond are also a dynamic duo behind the stage, as Lisa is one of her daughter’s assistant directors.

“My mother’s been a huge help!” said Bond. “She’s performed many tasks in the process of making the show happen, so for her to do this was really special. She blocked her scenes that she was assigned already and they look really good. In fact she’s doing great with the artistic side as well as the actual logistics of the play. She and Holly Busse, our other assistant director, have worked very well together. I couldn’t have done it without them!”

This month the directors, cast and crew have been working hard to prepare for the show. Costume design, set production and scene practices are well underway but there is still much to be done before opening night. Sketches for both the costumes and the set have been made and are beginning to take shape in reality. Jeannie Atwell, the costume designer for the show, with the help of Mindy Iverson, has already done the measurements and chosen the appropriate fabrics for each character and is now in the process of putting the pieces together. The set is being designed by Katelyn Geri with the help of Kayla Bartlett, but their task is limited for now due to having a stage shared with other performances. It won’t be until closer to the show that they can actually begin building all that they have planned, but one unique attribute already in place is the periactoids, which are pyramid structures that turn and are used together to set the background.

As for the cast, Bond has high hopes for their performance. “A lot of people that we cast, especially the children, this is the first show they have ever been in. I can’t wait to see how they do in front of a real audience and how it changes them to become even better performers and team players.”