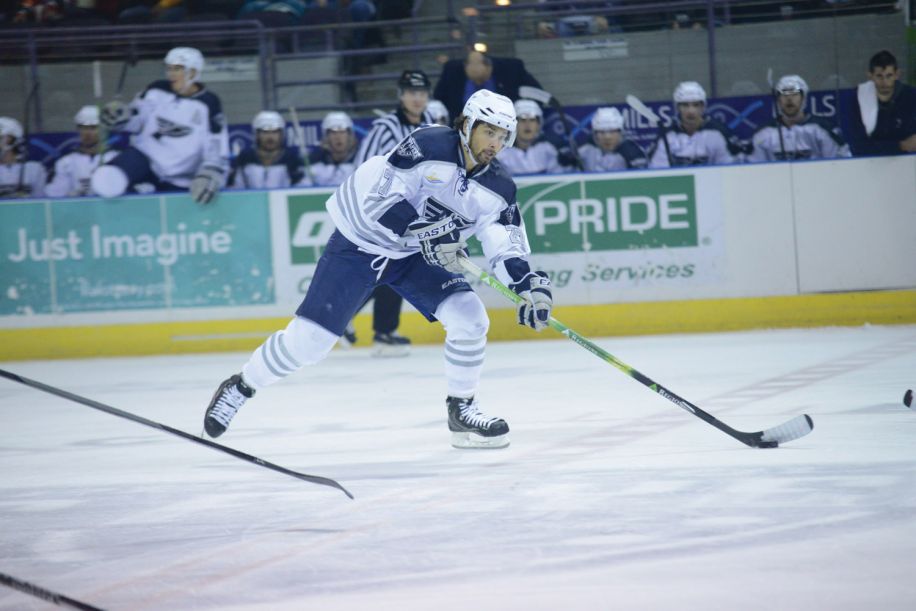 ‘Tis the season for hockey, so it’s okay to act like a wild turkey—just remember to don your favorite jersey and join the Downtown Crowd in welcoming back the Pensacola Ice Flyers for another season filled with home game theme nights and plenty of fun activities for the whole family.

Although the first home game of the 2015 season was played Oct. 30, four more home games are scheduled for November. On Nov. 6 and 7 the team will play against Knoxville Ice Bears, Nov. 11 against Mississippi River Kings, and Nov. 25 against Louisiana Ice Gators.

Players returning from last season are forwards Corey Banfield, Nick Lazorko, Nick McParland, and Adam Pawlick along with defensemen Brandon Blair, Jack Callhan, and Phil Tesoriero—leading the team in the locker room and on the ice. Also returning this season is high-scoring forward Joe Caveney, who played a key part in the team’s two President’s Cup championship games.

This year, the team has several fun ways for fans to interact with the players beyond typical games. These include the golf tournament on Nov. 1, as well as the bowling tournament on Dec. 6. Last year, proceeds from both events were donated to the Wounded Warrior Project. The team is still to determine what charity (or charities) donations will go to this year.

“We’re always trying to make sure we keep our donations in the Pensacola area,” said Geoff Nichols, communications manager for the Pensacola Ice Flyers. “We do this by donating to locally-based organizations and charities, such as Pensacola Humane Society and Wounded Warrior Project, to benefit our community. We’re always on the lookout for great charities that we can help out.”

Theme Nights will kick off with a Wiener Dog Race Night scheduled for Nov. 6 and another for the new year on Jan. 23, 2016.

The team started the races last year and, since they were a great success, the team has brought the wiener races back for a second year. The team encourages fans to make donations to the Pensacola Humane Society, especially items found on the society’s wish list on their website at pensacolahumane.org. The team accepts donations at their office (201 E. Gregory St.) and the Humane Society will have a concourse table on both nights where fans can conveniently drop off donations at the games.

“Theme nights are really a way of life,” said Nichols. “Not only in minor league hockey, but in all minor league sports. It helps out the office staff by having different events and opportunities to sell when trying to bring in groups. It also helps out fans by keeping the in-game experience fresh and unique with different  performances, appearances, and/or promotions.”

Theme Nights will continue on Dec. 4 and 5, for the team’s special Five Dollar Weekend—which means, you guessed it, all seats are $5 each (excluding seats by the glass). For the Five Dollar Weekend event, the team will be wearing a Star Wars specialty jersey prior to the new movie’s release on Dec. 18. Other themes include the annual Mardi Gras on Ice on Jan. 30, a Blue Wahoos night complete with players donning a Blue Wahoos jersey on Feb. 13, and Tampa Bay Lightning night on Mar. 19.

The team gets their uniforms from OT Sports, who provide uniforms and all of the team’s dark, white, and alternate jerseys as well as their specialty jerseys for Theme Nights. The Ice Flyers like to keep things interesting and mix it up a bit by adding in colors temporarily to their uniforms. Last year, it was dark grey and electric blue with the alternate jersey. This year, they’ve added a bright, lime green to the dark, navy jersey.

Although a few fans voiced displeasure at the new uniform colors on social media, Nichols believes this was due to how the color translated on the electronic image. Nichols and the team foresee the public reacting favorably to the change in color scheme once fans can see the colors really pop on the jersey material and against the backdrop of ice.

As far as team merchandise goes, they are starting the season with items they haven’t had in a few years, such as pennants, along with new versions of the old standards like license plates, t-shirts, replica jerseys, and mini hockey sticks. Newer items coming in include puck flasks. The team likes to mix it up as the season moves along, so they’ll be introducing new items through out the year, especially around the Five Dollar Weekend.

Don’t miss out on exciting mid-game activities, giveaways, family fun and great hockey at the Pensacola Bay Center for the November to March 2015-2016 season. Single game tickets range $15 to $29 (excluding taxes and online TM fees) and they are available for purchase online at pensacolaiceflyers.com.