We had the honor of speaking with an F/A-18 Weapons Systems Officer (WSO) in the United States Navy on Veterans Day. Caroline Johnson made a stop at the Bodacious Bookstore and Cafe to promote her book Jet Girl. As one of the few women to fly an F/A-18 and one of the first women to neutralize ISIS, Johnson had to overcome many challenges on behalf of her gender, which she confronts in her novel co-authored by Hoff Williams. You can purchase a copy of Jet Girl on Amazon and in the Bodacious Bookstore. 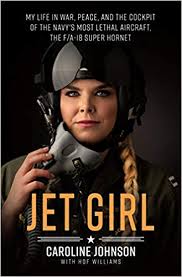 You’ve had an adventurous life and career. What made you decide to sit down and write a book?

We were just talking about this with my co-author Hoff at one of the launch parties. I was really fortunate to have other people believe in me more than I believe in myself, so my co-author Hoff actually said to me “You know, you have an amazing story. I didn’t even realize women flew fighter jets. You’ve got to share your story with the world.” I said, “Thanks so much, Hoff, but I don’t think I’m that special.” So, it actually wasn’t my idea. But what really made me come around to the idea was understanding that there are young boys and girls out there that are not well educated, unless they come from a military family or know someone who served, about the military. So, they don’t really know that this path exists. So sharing this story and engaging and inspiring the next generation is what got me on board.

In the research I have done about your book, it seems that your book is focuses on the difficulty of being a woman in a male dominated field. What are you hoping discussing this issue in will accomplish?

What I really hope it does for the next generation is act as a road map for them to say “Hey, she encountered those challenges. I’m going to come up on my own challenges, and they are going to be unique to myself, but I can persevere and harness my grit and overcome those challenges.” Number two, I think for leaders, just educating them that sometimes behind the scenes, people do face bullying and challenges, and the more you can be aware of it and really advocate for those people, the stronger team you are going to have and the happier and more satisfied they are going to be and the more they feel a part of the team.

How do you think we can get the military to where it is more equal across the board, and do you think that is even possible?

Definitely. I think there is still a way to come. I think number one the military is working on getting more numbers of women and men and different races so that it is more representative of the nation. Will we ever get to 50 percent? I don’t think so. It’s just not a traditional role for women and not as many women are inherently attracted to it as a career path, as men are. So, number one, I think numbers. Number two, having these conversations and being more open minded because what’s so cool about the next generation is that they are being raised with such open minded people, and they value that in choosing their career path. When the military is openly more supportive of different races, religions and genders, then people will be more willing to join the ranks. They will say “Hey, I can see myself being successful here. I see other people who look like me and sound like me being successful. I want to do this too.” I think just being aware of the unconscious biases that we have and actively working to challenge them on a daily basis makes us much stronger. If we come around and start to support one another better, I think we’ll have better odds in not only recruiting but receiving people who are minorities within the military structure.

You graduated with honors from the University of Oklahoma with a Master of Arts in Administrative Leadership and you’re continuing your service with the Navy as an advisor. What led you to pursue this path?

I currently am in the Naval reserve. I just transitioned into a new unit. I love the Navy, so I thoroughly enjoyed my experience. To still be able to serve and stay connected even in a part-time capacity was a big desire of mine. I didn’t want to fully let the Navy go. I care about the organization. I care about its success, so I still want to be a part of that. Getting the masters degree in leadership from the academy was always the dream. It was the most rewarding job in my entire career being able to work with the upcoming generation and exciting to see what they are up to and help mold them into good women and men who are fighting the fight.

What’s the next step for you?

Right now, I’m speaking professionally around the country and sharing not only my story, but this amazing story of people in the aircraft carrier and the team it takes to put weapons on target, on time and on range in the enemy territory. It takes a team and a family to be able to support these military members and help them succeed. So, I’m speaking about that and about leadership. I plan to do that for a little longer and hopefully get involved in consulting executives and helping them build stronger teams by using some of the things that I’ve learned not only in my masters but through experience. The coolest part of speaking is you get to go in these companies and get a behind the scenes look at these forward-thinking leaders who are really trying to solve these problems in the private sector, which actually relate to many of the things we do in the military, and seeing those best practices and learning what makes people great at what they do. I want to collect these pieces to help a broader group of people. That’s the ultimate dream.