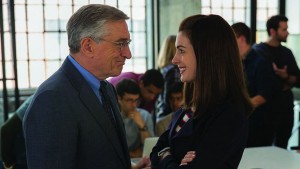 What I got from the preview: A widower played by Robert DeNiro is bored with retirement and decides to give his life some purpose and zest by interning at a fashion upstart, working for Anne Hathaway’s much younger character and bonding with his broish coworkers. Predictable fish-out-water premise aside, the trailer carries with it a lot of charm and heart.

Most notable for: Nancy Meyers (What Women Want, It’s Complicated) is one of the few directors working today who, first of all is a woman, but more importantly has an acute sense of character and a strong handling on pedestrian dialogue that is just clever enough to be entertaining. I’m happy to see her back at work after six years.

Unqualified critical observation: The cast is outstanding, with both long-term veterans of the screen (DeNiro, Russo) and relatively fresh but talented newcomers (Hathaway, DeVine). I’m also excited to see how this comedy handles ageism and the new intern economy. My only fear is a forced romance between DeNiro and Hathaway. I’d like to think Meyers is too smart for that trope. 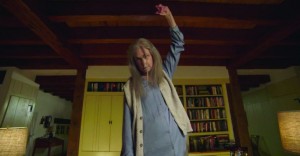 What I got from the preview: Yet another found footage horror movie about pre-teens in mortal danger because someone they trust is a proxy for the devil. If I had a nickel. Anyway, this movie has the special distinction of being directed by none other than M. Night Shyamalan, producer of some of the best and worst movies of the past decade and a half.

Unqualified critical observation: I’ll admit the movie’s premise and style is a bit compelling, though that appeal is quickly undercut by the found footage technique and Shyamalan’s name. He did well on Wayward Pines this past summer, but let’s not forget Devil, The Happening, The Village, and Lady in the Water, among others. He’s not the next Spielberg or Hitchcock, people; let it go. 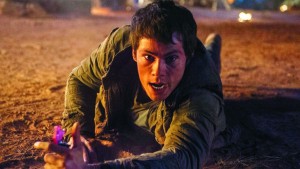 What I got from the preview: After the surprise ending of the first Maze Runner, the Gladers must now face their next challenge as they seek to 1) expose the truth of a fascist government and biological experiments run amok, and 2) sustain the positive momentum for another three movies, at least. It appears they also team up with another rogue group of youths as both parties try to survive the elements of a desert wasteland while evading capture.

Most notable for: I’m not sure it’s notable for anything in particular, but the young, relatively inexperienced cast does a great job of making the characters their own, as opposed to Katniss and Tris (Hunger Games, Insurgent, respectively) who are essentially celebrities in characters’ clothing.

Unqualified critical observation: I saw the first one hesitantly and under fear of marital disturbance, yet was pleasantly surprised. In an age of dystopian young adult fiction (Insurgent, Divergent, the most recent and abominable Hunger Games entry), this story found the right balance of paranoid, realistic, humorous, and heartfelt. Needless to say, I’ll be forced to watch this one as well, but I’ll acquiesce more willingly. 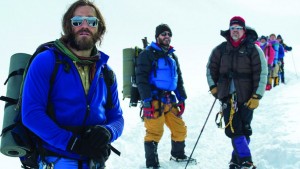 What I got from the preview: A climbing expedition on Mt. Everest quickly goes south (ha!) when a severe snowstorm decimates the climbing party. Lots of heroic sacrifices and hanging from ledges—intercut with concerned spouses, children and parents—ensue.

Most notable for: I can’t remember the last great survival movie. They are made far too infrequently, and I’m glad the studio had the guts to make this one with such a tremendous cast.

Unqualified critical observation: I’m a sucker for a good tale of survival, sentimental and emotionally manipulative though they may be. Apollo 13 remains one of my all-time favorites, and honestly, this one looks like it might just come close to achieving that grandeur. My only hesitation is the dependence on CGI, but a great story and even greater performances may just balance that out with a touch of humanity.

What I got from the preview: A young couple adopts a troubled young child who at first seems to be just suffering from insomnia and a hyperactive imagination. Soon, however, they realize that the child’s dreams—and nightmares—manifest themselves in our world and that they are trapped in a mediocre horror movie full of all the stupid decisions and stereotypes we’ve come to expect.

Most notable for: Kate Bosworth! Thomas Jane! They’re still around!

Unqualified critical observation: The past year has seen some major leaps forward in quality of horror (The Babadook, It Follows), but the genre will likely take a step backward with this one. Troubled kid? Dreams? Last minute twist that involves abuse, an asylum, or mistaken identity? You can count on this having all of the above, yet falling painfully short on anything like interesting characters or genuine, layered terror.