I feel like I hear a lot about Catholic guilt these and in review I read recently of your last album, the interviewer was convinced you reference that guilt on the new album. Is it a real thing for you, and if it is it, when did you first notice it in your life? It’s definitely a real thing, I think what I have is more inherited by from my parents upbringing of me—specifically my mom, and then I was probably directly absorbing it through school over time. I remember in seventh grade, we had a guest priest speak to our class. They separated the boys and girls and they told us that masturbation would send us to hell. That didn’t f*** with us that much really, but our parents and my mom totally did- she was super shamed-based in her tactics. She found some old ass playboys that I’d found in a dumpster or something, and I’d hidden them in a mattress- so much shame. I tried to get out from under that kind of stuff, but a lot of it is our culture. Even if you’re not raised in a religions house, our society has a very puritanical set of values. We have all these weird, messed up values, and sometimes we don’t question where our values even came from. We’re taught to be ashamed of sex as kids but then to be proud of it later on- lots of mixed messages. I really like Dan Savage- his podcast and his articles are syndicated in local Portland papers, and it’s one of my favorite things to read. People will write in about stuff that I have no interest in, but I still really love to read what the solutions to those problems are. Those articles really helped me to feel more comfortable about being who I am, and liking what I like. 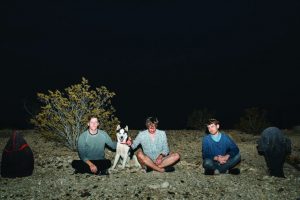 Read that you had a friend hypnotize you in order to ease your social anxiety. Did it affect you at all? Any fear they might do something completely different to you while you were hypnotized instead of what they’d planned? Thankfully the person who did it, I trust with my life- so I had no concerns. It really did help. The thing with hypnosis is that you remember everything, and you kind of have to choose to let it work- you have to let yourself be in that state. I feel like it’s a fast track to rewiring the brain; I think advertisers use it a lot. It’s not really magic, just affirmations. It’s almost like doing meditation but using someone else to help. It’s really powerful and I used it to quit smoking. I had started to smoke again after quitting for a while, I tried it out, and I just woke up and didn’t want to smoke at all. I was at a party a few weeks after being hypnotized, and would have normally been super anxious—I didn’t smoke or drink at all at the time, and it was really weird to not be anxious. I was really intrigued by hypnosis for a while, and I downloaded all these videos and podcasts that were just about aligning your behaviors with your actual wants—like mental gymnastics. It’s funny because in your life, you actually take a lot of care with yourself— you look before crossing the street, you wear a seatbelt— but with smoking you’re just so careless.

You’ve mentioned in several interviews and articles that the band and the music isn’t about fame and success, just about having fun while you can because we’ll all die eventually- first- how do you keep the existential dread at bay, and second, do you think the band would be different if success was very important to you? I do think about that stuff a lot– about how we’ll all be dead eventually and everyone who is alive now and knows anything about anyone alive, will one day be gone. Death is like manure in a way, it’s either really shitty or it helps you grow. We still have to go home and eat and get our sleep even though we will all be dead and none of this will matter. Doing mediation helps me buffer the awareness of the fact that all this is temporary, and it helps me chose to be more intentional in my actions. Instead of just contemplating the meaning of things and stressing out, it helps me be more aware and present so I can enjoy the walk I’m on or the meal I’m eating or the dog I’m petting. I definitely think that was more our philosophy about the band when it first started. I was close to giving up on being a musician— I was playing music and it wasn’t going well, and I thought well if we’re going to do something unsuccessful, I’d rather at least be doing what I want and enjoying, rather than just plugging away with the goal of being successful one day. Now, the band really has just become our job. I totally love our crew and the people in the band all get along which is really rare and cool. It is exhausting to tour, to be away from friends and family. It’s not always fun. Originally my thought was that it just had to be fun- that was very true in the beginning of the band- now it doesn’t really matter how we feel. We enjoy it enough, but how much can you really enjoy the songs, you’ve played a thousand times? I love going to shows to see bands I like, and I want to see a good set. We try to make a set that’s conducive to that environment. We put a lot of work into the set list, and the lighting, and every little thing we can to make it a fun environment. 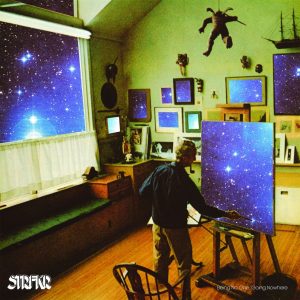 You feature samples from several Alan Watts lectures in your music. Where did that influence come from and what about his work appeals to you? The whole death thing—he really has a good understanding of eastern philosophy. He talks about it all with a very non-complicated, non- religious feeling, and he has a really colorful voice. He’s so good, even if you don’t care about what he’s saying, his voice is so engaging. What he talks about is really great; it’s like this Easter egg hunt in this realm of thinking. I was really depressed and started practicing mediation and it saved my life. I like putting that stuff into songs because someone may have no interest in philosophy whatsoever, and then hear this great voice and these words and actually find it interesting to listen to.

Your album out last November, titled Being No One, Going Nowhere, was still full of dancey vibes and plenty of synth. Then Vault Vol. 1 was release this year and the two releases sound almost nothing a like. Tell me a little about Vault Vol 1—is this something you’ve been planning on releasing for a long time, or something you put together impulsively? It was a totally impulsive release. It’s just songs I’ve been writing since before STRFKR existed- mostly short songs, and little bits of unfinished things. A lot of these songs were things we’d tried to make sound polished at one time or another. We had over 80 demos, and I just realized we were never going to finish them all, or perfect them. Sean, our bass player said I should release them all and just put them out as a vault- kind of like a box set- that way they could come out whenever we wanted. I feel like it’s not like the albums were meant to have a proper release. They’re maybe something that fans who are curious about what our songwriting is like—kind of a peek inside the process. A lot of people wont like that unfinished or unpolished vibe, but we thought it was good enough as it is. It definitely was not made with a bunch of intention. We’ll have two more volumes that will probably come out this year as part of the vault series.

Every time I read an interview with you, you always reference a book you’ve been reading and the subject matter always seems to differ. What are you reading now? I just started reading “The Razor’s edge,” I’d heard from people that they really liked it but had never read it myself. I’m also reading this other kind of more practical, meditation book.