The cannon blasts and hundreds of feet hit the pavement running. The young and old alike tear off as if their lives depended on it – a blur of white and red. They rush the streets of downtown Pensacola, cutting a swath down East Government Street in a heart-pounding, 2-mile race to the finish. But will they make it? The second cannon sounds—the bulls are coming.

For the past six years this has been the scene at the Pensacola Roller Gurlz’ (PRG) annual Running of the Bulls event. Each year runners must test their skills against the “bulls,” portrayed by the wiffle-bat wielding Pensacola Roller Gurlz who give chase on skates and try to tag runners to coax them towards the finish line.

This year marks the seventh annual Running of the Bulls, which is held during Seville Quarter’s Fiesta of San Fermin in downtown Pensacola from July 13-15. The proceeds of this family-friendly event will go to the Northwest Florida USO. 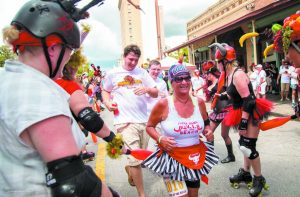 As one of the event organizers and former PRG president Susan Carter, a.k.a. Smacker Jack Suzie, is no stranger to the derby scene in Pensacola and has her finger on the pulse of derby both locally and nationally. Passionate and driven, Carter’s love for derby hasn’t dwindled one bit since her retirement from the sport in 2015.

“PRG will forever remain in my heart,” Carter says. She speaks eagerly about her experiences and about the upcoming event, her easy wit and good humor on full display.

Carter began her venture into roller derby in 2008 when she moved to Pensacola with her husband who was re-stationed at NAS while preparing to go into retirement. Once he retired, she started to feel there was just something missing.

“Being military, you have that close knit family in the Chief’s nest with the wives and the guys and all that so I needed something to fill that void because we didn’t have that anymore,” Carter says.

That’s where derby came in. Carter noticed a flier at work for an upcoming July 4th event and immediately took interest. Growing up in the 1970s in Knoxville, Tennessee, Carter was familiar with derby since childhood and knew instantly she had to do it. Attending that initial event was all it took to convince her once and for all.

“I said, ‘That’s it!’ I went in full force; bought my gear; bought my skates, and the first night in I fell in love with it and stuck with it for four years,” Carter says. 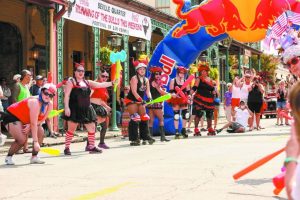 But derby isn’t all sunshine and rainbows. At 41, Carter was the oldest member of the team, which came with its share of challenges. Roller derby is a full contact sport and it takes a great deal of hard work, dedication, discipline, and guts to do it. Derby girls work hard to earn the right to strap on their skates and represent their team. And derby can be brutal. Injuries like strains, sprains, and broken bones all come with the territory. This doesn’t seem to dissuade Carter one bit, though.

“My second year in, I tore my ACL and had to have it replaced. We’ve had broken bones. I’ve broken my pinky and girls have broken their legs or hurt their shoulders. You figure we’re going at a pretty fast pace when we go in to hit somebody and you use your shoulders or your hips to hit somebody. You use what God gave ya,” Carter says. “Sometimes I would go away from practice wondering ‘Why am I doing this? But eventually you get it. Its muscle memory and you end up doing it. You end up amazing yourself.”

“It’s a good sport for women to build self-confidence. I didn’t have the confidence that I needed until derby. I have more confidence in myself now than I did years ago. It’s a very empowering sport for women. People think it’s all staged, but it’s not. You have plays, you have offense and defense at the same time. The way we explain it is its like football on skates without the ball. It’s a sisterhood type thing,” Carter says. 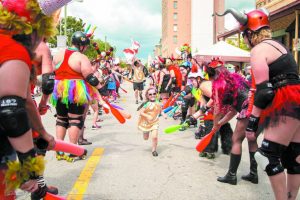 When asked about her hopes for the future of the Running of the Bulls event, Carter says she hopes it will continue to grow. The Pensacola event sees close to 1,000 participants each year, but Carter says she would like it to rival the event in New Orleans — from which they took their cue – which sees approximately 5,000 participants each year. Not only would this give PRG the exposure they so deserve, but it would also help raise money for the charity selected to benefit from the event each year.

Last year, the PRG and Seville Quarter raised $2500 for the USO and they would like to build on that success this year. Carter places her confidence inSeville Quarter’s management for their long history of success with this event.

“Seville Quarter puts the whole thing on. Jack [Williams] is amazing! He does everything that he can to help promote the run,” Carter says.

The Running of the Bulls is one of several events taking place during Seville Quarter’s Festival of San Fermin from July 13-15. Families are welcome and, in fact, encouraged to attend. If you ask Carter, they’re the best part of the whole deal.

“It’s a party, but its family oriented because we want families to be involved,” Carter says. ”My favorite part of the run is the kids. When we do the gauntlet at the end, they just keep coming back in. If we kept that gauntlet open for 4 hours, they would just keep coming back. They love it!”

For those participating in the run on July 15, Carter has a last bit of advice to offer. 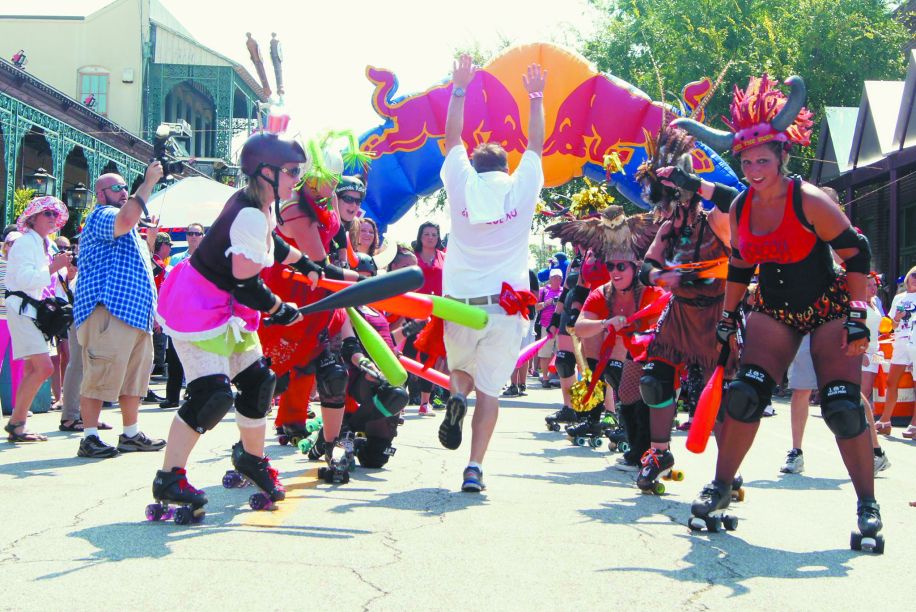 “Have fun. Laugh. And, actually, the main number one thing we see is when people put their hands behind their backs to try and cover up – just don’t do that,” Carter says. “Just take it. You know its coming. Just take it.”

And for those still not convinced they want to lock horns with the “bulls” but would still like to attend, fear not! You can still join the fun and run so long as you steer clear of the road and stick to the sidewalks.

WHAT: Running of the Bulls*

*Registration for the run is still possible from 7am-8:30 the morning of the race.