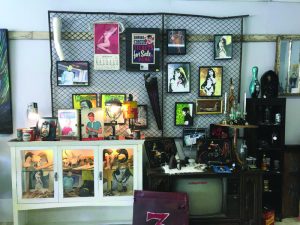 Punk Rock Flea Market Pensacola is making a comeback. After hosting the first PRFM in October, Bari Kyle, owner of Nearly Dead Threads and mastermind behind the flea, is bringing her punk rock vibe to West Navy Boulevard. With the help of her boyfriend, Jeremy Barrick (owner of Lickety Splitz), Kyle is moving Nearly Dead Threads—now Nearly Dead Threads & Oddities— to a venue next to Remember When Sweet Shop on West Navy.

PRFM was such a massive success in October that Kyle said she never even got away from her own booth to explore her creation.

“The turnout for the PRFM was even better than I could have hoped for. It was right at 2 pm when I looked up, the flood gates opened, and there was a steady stream of people until the end.” Kyle said. “The consensus from the vendors following the flea was that the flea market brought them the best sales they’d had at a pop-up event— some of them even selling out of all the merchandise that they brought.”

As for the new shop, it won’t be as large in scale as the annual event space; however, it will give visitors a sneak peek at what they can look forward to next October.

“Before Punk Rock Flea Market Pensacola, there was some talk about maybe doing it twice a year. During the flea, there were requests to make it monthly. The problem is that it takes a lot of planning, and finger crossing for factors like weather, to try to organize this type of event. The plan is to stick to making it an annual event and have this smaller version of it within the new shop all year long” said Kyle.

She said this blessing in disguise was, more or less, forced upon them as she found out two days after the flea market that the space Nearly Dead Threads was in was closing.

“While driving West Navy Boulevard to try to find a new home in some other antique place for my shop, I saw “Remember When Sweet Shop” had a space next to them for lease. It dawned on me that we didn’t have to try to have just a vintage clothing store when I could bring in some local artists and recreate the same type of environment from the PRFMP but on a smaller scale” Kyle said.

Nearly Dead Threads & Oddities will remain the backbone of the project, but the addition of a smaller-scale flea gives Kyle and Barrick a way to showcase the artists and vendors they believe in all year long. Kyle stated that some of the vendors are from the flea market and some are new. She also said they would like to continue to meet artists who are a good fit for the flea market, as this is a way to promote PRFMP year round.

Visitors can still expect a large variety of products sold in the shop.

“Although a little more tame and refined, as opposed to the flea market, we wanted to be able to appeal to a wider market” said Kyle.

Nearly Dead Threads & Oddities will have unique goodies from things like succulents and handmade Christmas ornaments to antique medical devices and even wet specimen octopi. Of course Kyle will still have her vintage clothing for sale along with, fellow boutique, Vintage on the Rocks.

This shop is a way to give creative souls an outlet and put their hard work on display and to give the punk rock scene in Pensacola the recognition and attention it deserves.

“The bottom line is that anyone can find something here, even the typical West Navy Antique Row shopper” said Kyle. “Anyone with a love of the arts, a creative flair or an interest in curiosities will enjoy it.”