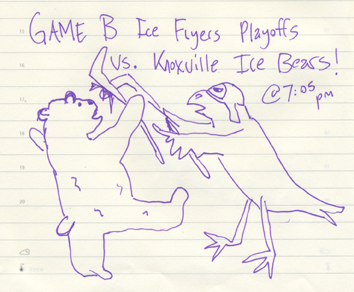 About every week from October to April, I and hundreds of others assemble to be a part of something bigger than ourselves. Everyone is welcome and we’re all here for the same reason. We often all dress similarly in something of a uniform for the occasion. As one, the group stands at the appropriate times, and we chant in a uniform voice. A disembodied voice speaks and we all respond in kind.The voice bellows, “The Mississippi Surge are back at full strength!”

The Pensacola Ice Flyers ice hockey team has inspired passion and pride in Pensacola since their inaugural season in 2009. Besides the fact that it’s pretty cool that our little slice of the Sunshine State even has an ice hockey team, the sport itself offers hands down the best entertainment in the area, since hockey is unequivocally awesome.

Hockey takes many of the general rules of the second best sport known to man (soccer obviously), speeds it up, and removes its biggest flaws, namely, the huge field that takes forever to traverse and the constant knee-grab-and-grimace diving. Ice hockey games give fans a fast-paced showcase of strategy and accuracy, along with the passion and aggression necessary for maintaining control of a tiny puck against the sticks and well-padded bodies of opposing players.

Every season our Ice Flyers finish stronger than the previous, culminating in their 2012 upset against the Columbus Cottonmouths and then to last year winning of the President’s Cup and placing them in this season as the defending Southern Professional Hockey League champions.

Tonight, they’ll face off against the Knoxville Ice Bears at 7:05 pm in Game 1 of the best of three semifinals, and I for one wouldn’t miss any home games in this playoff run for anything. I’m not alone in my local hockey obsession. Despite our shared southern disdain for cold, the Hangar has averaged just over 4,000 fans per game this season, topping all other SPHL teams for attendance numbers.

If you haven’t been to a game in a while, tonight’s will be a great, high-intensity game to join the ranks of the Ice Flyers’ extensive fan base. Energetic fans keep players’ spirits high and push them to continue on their current winning streak. Nothing beats the shared sense of pride that our team inspires, except maybe the shared lack of shame when we all do the official victory dance every time our team scores. And even if you don’t know all the proper call-and-response chants, just look ahead and mumble along.