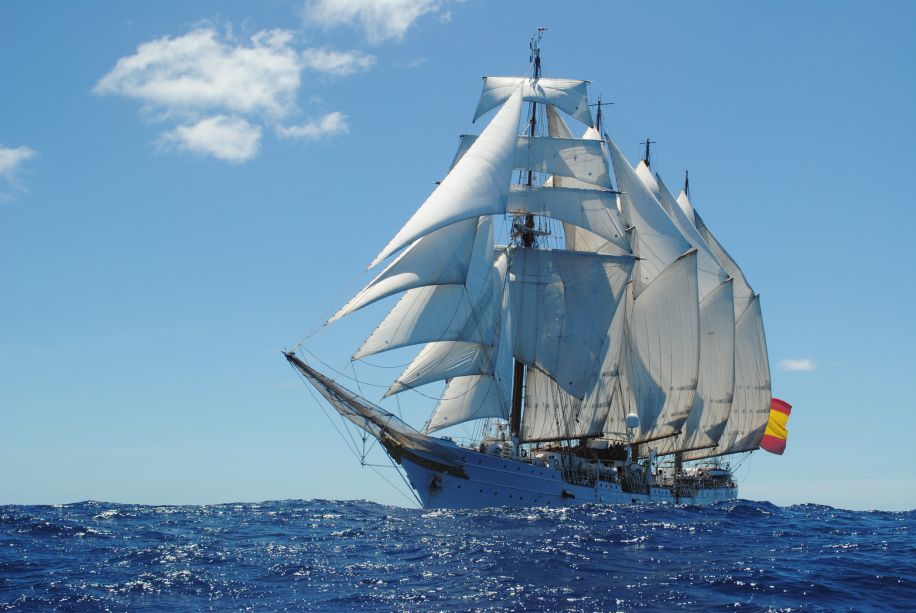 Pensacola residents and visitors are in for a special treat this spring. From May 27 through June 1, the Spanish Navy training ship Juan Sebastián de Elcano will visit Pensacola. Maria Davis, the Honorary Vice Consul of Spain in Pensacola, has spearheaded the Elcano’s six previous visits to Pensacola. The first was in 1981 when the ship was commanded by Captain Cristobal Colon De Carvajal Y Maroto, a direct descendent of Christopher Columbus.

Currently under the command of Captain Enrique Torres-Piñeyro, the four-masted schooner is one of the oldest tall ships sailing today. Built in 1927, the Elcano was named after the Spanish explorer who completed Ferdinand Magellan’s first-ever circumnavigation of the earth from 1519 to 1522. At 370 feet long, she is the third-largest tall ship in the world.The hull is made of iron and there are four masts (called Blanca, Almansa, Asturias and Nautilus, after other training ships which preceded the Elcano). Up to now, the Elcano has sailed on 85 training cruises, including ten circumnavigations of the globe. Sometimes referred to as a floating university, the Elcano is also an ambassadorial ship. Spanish Naval Officers study for five years and their Elcano tour happens during their fourth year. During this year, the officers visit at least a dozen cities and learn firsthand about life at sea.

Maria Davis explains that the ship’s visit has a special significance this year, “General Bernardo Galvez came to Pensacola in 1771 and he fought The Battle of Pensacola, which played an important role in the fight for independence. Right now we are celebrating the fact that Bernardo de Galvez has become an honorary citizen of the United States. Only seven other people, including Winston Churchill, Mother Teresa and the Marquis de Lafayette have made this list. This is a great honor to Spain and the Elcano comes to honor Galvez.”

This year, the visit also coincides with Pensacola’s Fiesta Days and a number of special events are in the works. While in port, the Elcano will be open to the public for tours. Davis estimates that approximately 10,000 people visited the ship during its last visit in 2009.