It turns out the sweet nursery rhyme or song your grandma might have hummed to you as a baby left behind more than an emotional memory. It likely helped you to form early recognitions of human emotion and language.

Research conducted in the last 10 years show reading and singing to children from birth through toddler years is one of the most important and helpful things a parent can do for their developing baby’s brain.

One study from the Center for Early Literacy Learning showed that while the babies don’t understand the actual words yet, they are able to pick up on inflection, tone of voice and emotion through the spoken language, which can help them form important cognitive skills as they develop.

The Early Learning Coalition of Escambia County, Studer Community Institute, various childcare networks, and local birthing hospitals are working together to foster a culture of early learning throughout Escambia County.

Vicki Pugh, director at the Early Learning Coalition of Escambia County, said she couldn’t stress enough to parents that they are their children’s first teachers.

“We encourage all parents and caregivers to read, read, read, talk, talk, talk—we need more conversations, more reading and more singing— and less time in front of electronics,” she said. 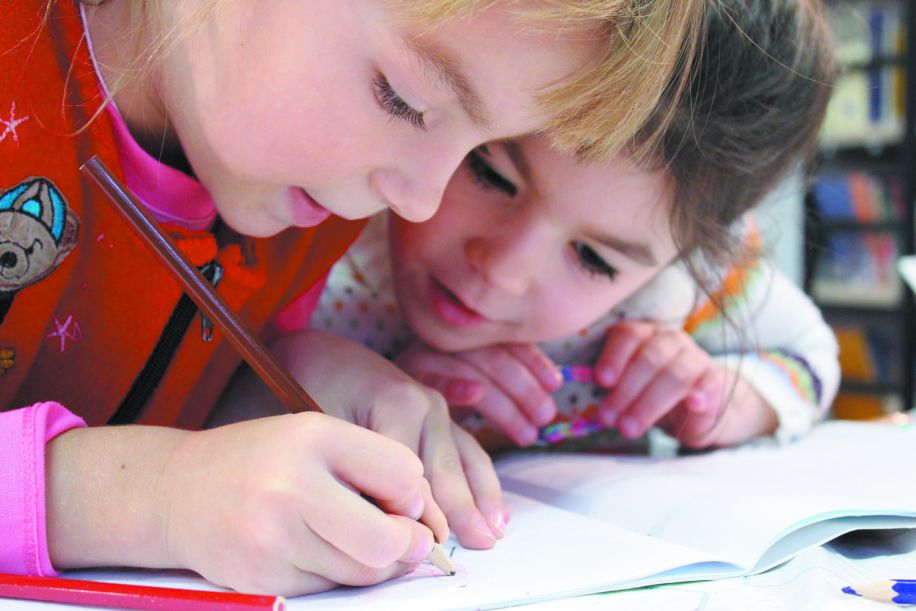 The Early Learning Coalition of Escambia County (ELC) has several programs and partnerships geared toward building strong brain connections in children below the age of four. Their mission statement is to identify and meet the needs of children and families to lay the foundation for lifetime success by maximizing each child’s potential, preparing children to enter school ready to learn, and helping families achieve economic self-sufficiency.

Pugh noted that while smartphone usage is skyrocketing, it’s important to turn screens off and lessen the exposure of electronics to children under the age of four.

“The first three or four years, they just really love to hear the voices of the people that surround them,” Pugh noted. “They’ll have plenty of time for TV shows and video games when they’re older.”

ELC helps facilitate the Voluntary Pre-Kindergarten program, a federally funded program which helps prepare four-year-olds for kindergarten, while building the foundation for their educational success.

“Kindergarten teachers say they can tell a difference in a child, if that child has been enrolled in VPK, from a social and emotional side—how the child communicates, if the child is able to sit still, how they get along with others,” Pugh said.

As one of their recent projects in 2016, ELC partnered with Studer Community Institute to launch LENA Grow, an infant-toddler initiative that measures the amount of talking inside a classroom between caregiver and child. Fifteen childcare centers throughout Escambia County partnered with ELC as part of the pilot program. 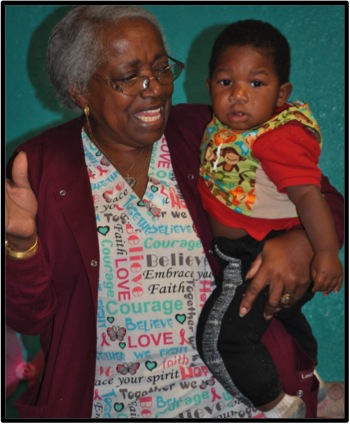 LENA is a “Language Environmental Analysis” device the size of a pager- a “talk pedometer” that a child wears one day a week (recording day) and it captures the conversational turns between adult and child in the classroom. The responsiveness of the adult helps builds neurons in the child’s brain. Coaches work with the caregiver to extend the amount of conversation turns every hour, Pugh noted.

Since its launch last fall, Pugh said the coalition has already seen positive results from the LENA device and the ability to track, modify and increase teacher/toddler interaction through coaching.

The team at the Studer Community Institute (SCI) knows how important it is for parents to talk and read to their newborns. SCI was looking for a way to get that knowledge into the hands of new parents as soon as possible, so they’d be able to have the most immediate effect on the development of their child’s brain—which research shows is 85 percent developed by the age of three.

SCI attended an early learning summit in 2015 and they learned about a nonprofit organization in Martin and St. Lucie counties that found a way to encourage new parents about the importance of reading to their baby from day one— a product called a BRAIN Bag.

The BRAIN (Building Readiness Amount Infants Now) Bags offer parents tools, tips and resources to understand the importance of early reading and to help them implement those tools into their daily lives.

“We thought this was such an interesting idea—a concrete idea and tangible thing to give new moms, that helps show how important language and talking is, from the very first minute of their life,” said SCI Project Manager, Shannon Nickinson.

SCI adopted the BRAIN Bag idea and received a grant from IMPACT 100 in order to bring the bags to life in Escambia County. 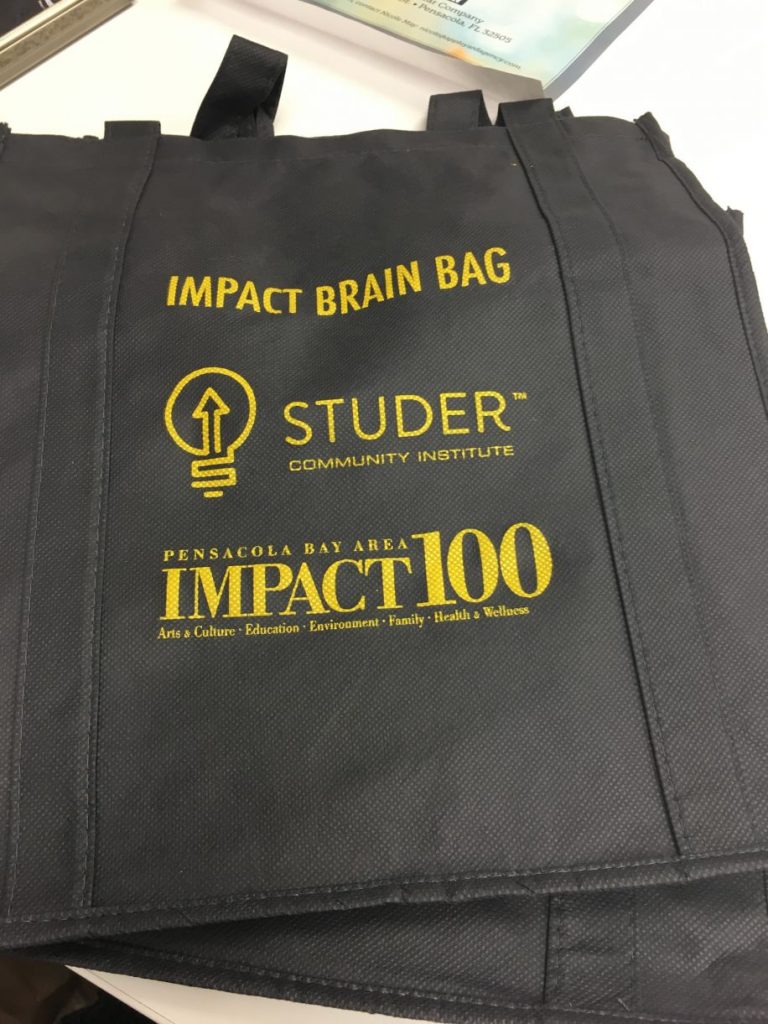 The bags contain a binder that contains information from Healthy Start on safe sleep; information from the Text for Baby organization; material from the 5201 Campaign which suggests five fruits a day, two hours or less of screen time, 1 hour of physical activity, and zero sugary drinks; a web-based lists on where one can find more information on recommended programing from PBS; and a copy of the book, “30 Million Words,” by Dana Suskind, a professor at The University of Chicago Medicine.

Suskind is the founder and director of the Thirty Million Words Initiative, an organization striving to improve early education for children around the world. Her book “30 Million Words,” stresses three important factors to parents—tune in, talk more, and take turns.

In the fall of 2016, Suskind partnered with SCI to launch a yearlong project—the distribution of BRAIN bags to all three birthing hospitals in Escambia County— Sacred Heart Hospital, Baptist Hospital, and West Florida Hospital. This project ensures that any new mom, regardless of race or income, will receive the tools they need to jumpstart their baby’s brain development.

“They (partner hospitals) were so excited throughout this whole process,” Nickinson said. “I knew that to pitch this to them was more work for them, but no member of the staff ever viewed it as more work—they know how important it is and they see the benefit of it every day.”

Research from a study conducted by the Department of Education and Early Childhood Development in partnership with The University of Melbourne found that reading and singing to children was an early-life intervention that became beneficial for the children over the course of the rest of their lives. Research also suggests the more a community practices these early learning initiatives with their children, the higher the likelihood those children will grow up to the do the same with their own kids, thus promoting a cycle of early learning throughout the community for generations to come.

SCI is also working on partnerships with Upward Intuition—the local group spearheading the development of The Blake Doyle Skate Park and community area underneath the 110 interstate ramp downtown— and the City of Pensacola in order to create early learning signage in and around community parks, and develop special early learning parks that are easily accessible to the public.

The first special early learning playground and garden was completed this spring. The park, located on Main Street near the Bodacious Brew Thru, contains special sensory equipment, colorful architecture, natural vegetation, and will serve as a home for monarch butterflies.

These partnerships and initiatives will help facilitate the growth of Pensacola into an early learning city— a community ingrained with the knowledge of how important those first years of life are, and the tools to enact that knowledge.

“What feeds the brain are words and interactions. Words from a screen don’t make as much of an impact—the way we learn is through interaction, “Nickinson said. “All of this knowledge is only effective if it helps the parents and the children interact in a more meaningful way—that’s the secret sauce.”