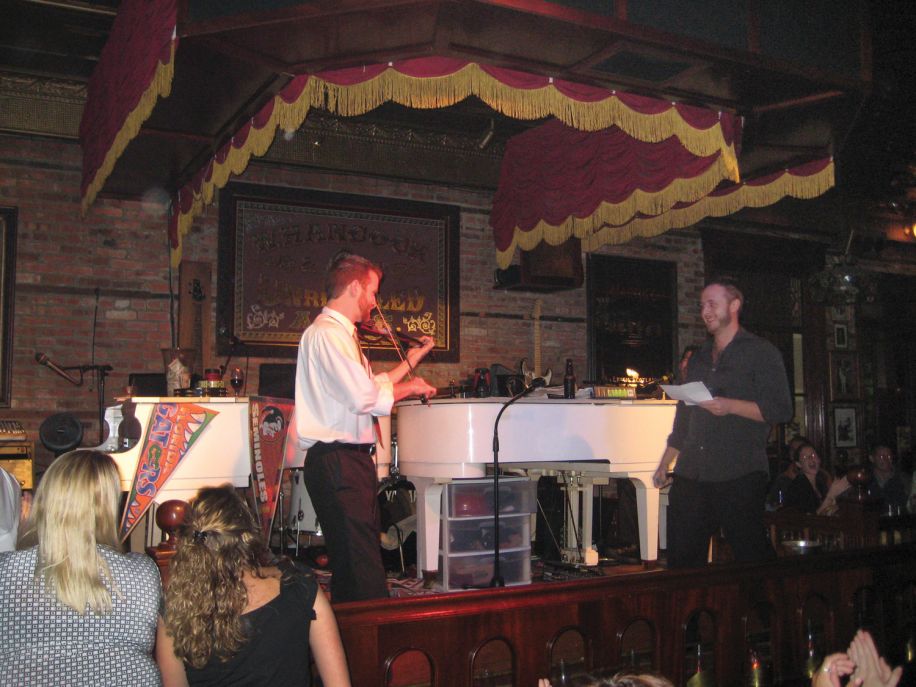 Seville Quarter’s dueling piano show in Rosie O’Grady’s is a rollicking good time that starts at 8 pm every Wednesday, Thursday, Friday and Saturday. The show is built around performances by talented musicians who know how to work the crowd and probably know about a thousand songs between the four of them, by heart. Playing from the heart means more than just knowing the notes without sheet music; these guys put their soul into every key, striking passion into the hundreds gathered and inspiring us all to access our inner piano man. You’ll hear favorite bar stand-bys like “Sweet Caroline” and “Jack and Diane” alongside modern-day hits like “Shake It Off” and “Pill In Ibiza,” all while an endless supply of draft beers find their way to your table. If you’ve never felt the raw, tribal sensation of joining in song with hundreds of your fellow Pensacolans, you’re missing out.

Downtown Crowd spoke with Dew Pendleton, a long-time dueling pianist about working the crowd, loving your job, and never getting tired of partying with your “Friends in Low Places.”

Tell me about the dueling pianos show.

Well, I’ve been doing it since 2008 as a full-time gig. We do it every Wednesday, Thursday, Friday and Saturday and it’s always a great time. Before working here, I had played piano with my mom and a couple different piano players, but nothing super serious. One night, I was here with friends and after karaoke, I began playing the piano in the hallway by the bathrooms at Seville. I was just singing and playing, not very well but with a lot of heart. One of the managers came up, and I guess he was impressed, because he asked if I wanted to maybe do this full-time? He hired me on the spot.

Some of the old-school guys trained me. I had to sit on my right hand for six hours a day practicing those bass notes. I think I probably learned a couple hundred songs in like three weeks. It’s been a great experience and honestly I’ve probably forgotten more songs than I remember.

Even if someone requests a song I don’t know by heart, I can usually fake it because I can hear the melodic structure in my head. You know, a lot of songs are similar, especially country songs. Nevertheless, I’ve got to keep up to date with what’s on the radio, too.

How do you get the crowd going?

If you’re not having fun, it’ll really show. So, it’s all about reading the audience. I try to tell myself that it’s like I’m in front of a campfire and there’s a guitar getting passed around, and everyone’s trying to engage their friends and just have a good time. It’s like all your friends are over and you’re just partying. We have a lot of regulars at the show so we try to keep a down-home feel. It’s really all about atmosphere and using music and charisma to cultivate that atmosphere.

About how many songs do you know?

Gosh, probably about 200. Some of the other guys know 400 or 500, but we normally play about 200 different songs. You have to know the old favorites, like Elton John and Billy Joel, “Tennessee Whiskey,” Blondie, “Girl Crush,” Brown-Eyed Girl,” and others. And then there’s songs you have to learn because they’re on the radio, like Taylor Swift. You’ll play the same song four or five times a night for months and then never again. It’s kind of funny. Everyone has to hear their favorite radio songs and then they never want to hear it again.

Tell me about playing off your partner.

We really try to accentuate each other and have a partnership. We’ll play back ad forth, maybe jump on the drums or fiddle, but really just try to hang out and have fun. We want to have the best time every night. We really love our jobs, so we’ll play whatever. I love to meet people, learn from them, and enjoy their enthusiasm about the lifestyle. That’s the culture of Seville and that’s really the culture of Pensacola. The show will always go on and it will get better and better.