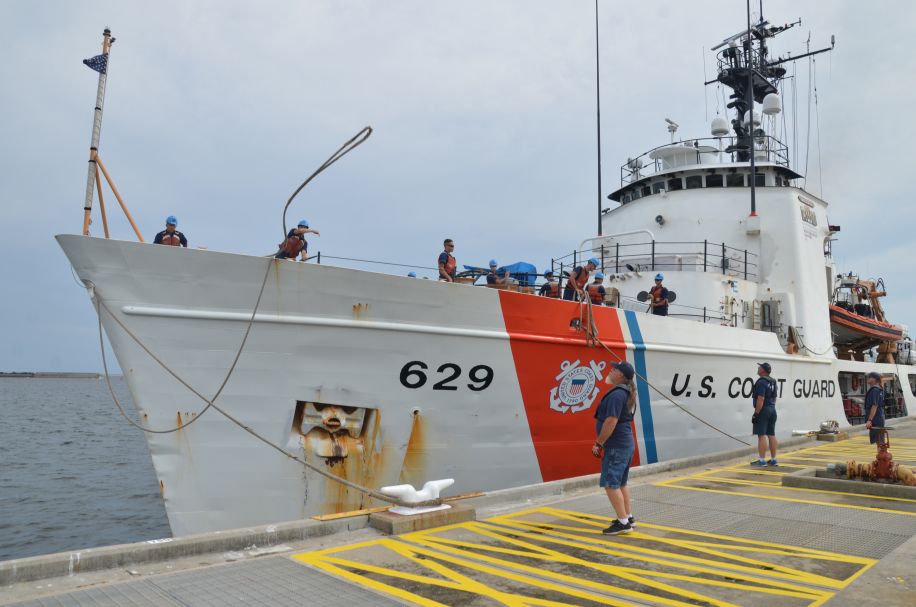 Out in the haze of Pensacola Bay, a tall white ship breaks through the mist. On its deck, a line of men stand at attention and another group peer toward the shore, readying docking buoys at their feet. The ship is the U.S. Coast Guard Cutter Decisive (WMEC 629) and the 73 crewmembers are getting their first glance of their new home. Decisive has shifted its homeport from Pascagoula, Miss. to Naval Air Station Pensacola (NASP) as of June 5, and is the first of up to three more cutters scheduled to homeport in Pensacola. They will join the USCGC Cypress (WLB 210), a buoy tender that has been at NASP since 2011.

The ships’ relocation was announced in June 2017 by U.S Rep. Matt Gaetz. In a press release, he stressed the importance of the 210-foot Medium Endurance Class Cutter’s move to Pensacola.

“This is incredible news for Pensacola and for all northwest Floridians,” Gaetz said in the release. “Not only is northwest Florida gaining 152 new families, but the safety and security of the Emerald Coast and the Eastern Gulf of Mexico is significantly enhanced.”

The ships represent long hours and hard work from people all over the country, including Coast Guard Cmdr. Blake Novak, who was the commanding officer of Decisive during its shift of homeport. As part of the team that began the process of bringing the ships to Pensacola, Novak expressed how proud he was to have been a part of the operation.

“One of the reasons I stuck around for another three weeks was to see this through to the end,” he said.

Along with the Decisive, NASP will be the homeport of the USCGC Dauntless (WMEC 624), currently in Galveston, Texas, which is scheduled to arrive between mid-July and August.

At the dock to welcome Decisive and the crew to their new home was a group of Pensacola and Navy officials, community members, NASP service members and the Navy League, a nonprofit organization that supports U.S. sea services, including the Navy and Coast Guard. Among the crowd was Escambia County District 2 commissioner Doug Underhill, a Navy veteran with 27 years of military service. He expressed the benefits and importance of having these ships in Pensacola.

“There is a federal mission that needs to be done and it needs to be done in Pensacola,” he said. “There’s 120 men and women on these ships that will very soon be in our churches, they will be teaching our Sunday schools classes and coaching our baseball teams and soccer teams. This adds to the texture of who we are.” 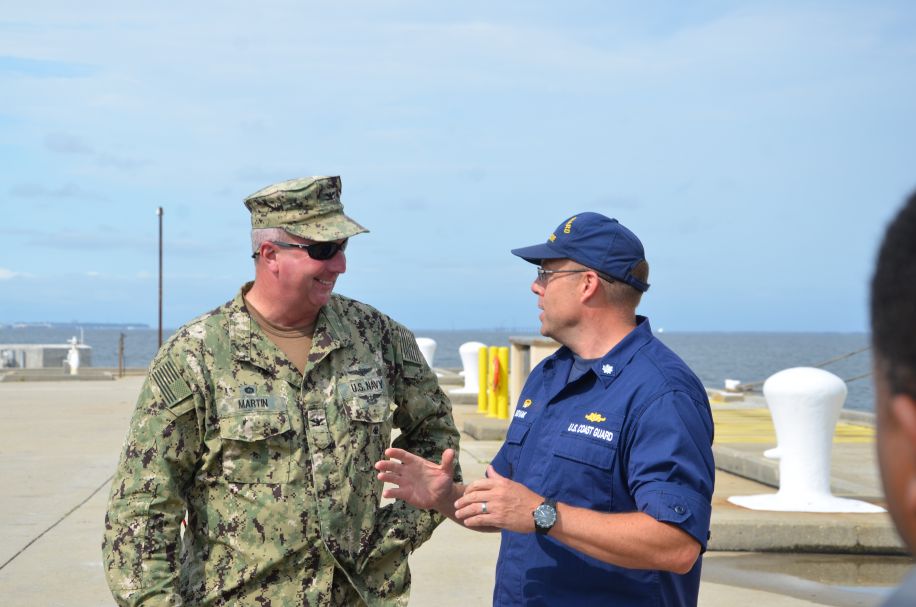 The ships’ arrival is expected to bring a boost to the area economy, as families of crewmembers relocate and Coast Guard operations increase in the local area. Gaetz has expressed the importance of not only the ships themselves but the people they bring with them to Pensacola.

“Our region is home to thousands of families who are here because of the military,” he said. “While I know that moving can be stressful for military families, it is up to us to greet the new members of our community with open arms, and on behalf of Florida’s First District, I would like to wish them a very warm welcome.

“In Florida, our military roots run deep,” Gaetz continued. “The armed forces play a vital role in our community. I am certain that these newest members of our military community will fit right into the warm and welcoming environment of Northwest Florida.”

As with cutters of its class, Decisive’s primary mission is counter-drug operations. The ship is marked with the crew’s successful drug interdictions: 19 marijuana busts, nine cocaine busts, five drug boat seizures and one semi-submersible. From NASP, Decisive will continue to patrol the Gulf and South American coasts. Dauntless shares the Decisive’s mission and was involved in an operation partnering with the Royal Canadian Navy that seized more than 26 tons of cocaine worth at least $715 million in 2016. The cutters will also be engaged in search-and-rescue operations, maritime law enforcement and other missions around the Gulf of Mexico.

For the crew of the Decisive, getting their first glimpse of the Pensacola shoreline was powerful. As they pulled into dock and each Guardsman took his or her first steps ashore, they represented the beginnings of more to come to both Pensacola and the Coast Guard.

“For the Coast Guard, this is a big move to come to a facility like this Navy base that has a lot of support,” Novak said. “The support the Navy has here is exceptional and to our people it makes a big difference. I can tell you our crew is very excited to be here.”