By Gina Castro | Photos by NPS

76 years ago, a B-24 liberator plunged into the Alaska snow. It was Dec. 21, 1943, when at 25,000 feet, one of the plane’s four engines malfunctioned, and the aircraft suddenly began to spiral out of control. The military aircraft carried a crew of five but only one survived. Co-pilot Lt. Leon Crane was launched into Alaska’s -40 degree weather with only the clothes on his back. Master Sgt. Richard Pompeo, who was thought to have parachuted out, was never found.

The supplies in the plane were overrun with flames. Crane had no cell phone and no GPS let alone a compass to guide him home. He had nothing but his parachute, which he used as a makeshift sleeping bag, two packs of matches and a boy scout knife for the nine days he spent waiting for aid.

Crane, afraid of succumbing to starvation and hypothermia, decided to trek 120 miles north along the Charley River. What Crane didn’t know was that along the river are several unlocked small cabins with supplies and food, also known as a trapping area. He stayed in one of the cabins for two months to treat the frostbite on his hands and feet. Once Crane regained his strength, he continued his journey for help along the river. He eventually came across another cabin that was occupied by the trapper Albert Ames and his family. The family brought Crane via snow dogs to the Woodchopper mining camp along the Yukon River. From there, Crane flew back to base at Ladd Field near Fairbanks.

Today, the crash site still remains in the area now known as the Yukon-Charley Rivers National Preserve. Well, for the most part, Rachel Hines, University of West Florida archaeology graduate student, said during her presentation for Odd Colony’s Archeology on Tap series.

“A lot of the things had clearly been taken from the site over time,” Hines said. “It was pretty obvious that things that should have made it like gauges, dials and other things that are fun to have were missing. We looked at some photos from the 80s of the site, and in the photos, there was a machine gun, and now its missing. It was cool things like that that people took.” 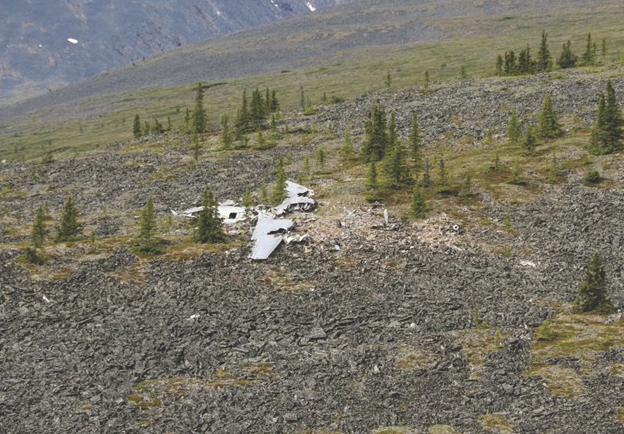 “ I think because of this story that is associated with Leon Crane’s survival, it would really be a loss for the park to give up parts of the site. I not only thought that we shouldn’t salvage this but also that we should put it on the National Register of Historic Places because it’s a cool story.”

Though the site can be reached only by helicopter, the site has been visited plenty of times by archeologists and others. Hines and her coworker, Emilia Tifental, were sent to the crash site to document the serial numbers of all of the site’s remnants. They were there for a total of three days and documented 160 items from the site. Hines said that they downloaded pilot manuals of the B-24 liberators from online to help them identify the pieces they found.

“One of our goals was to deter people from taking things or at least to get all of the information about it incase people do take things in the future,” Hines said. “Our other goal out there was evaluating the site for the National Register of Historic Places. The National Register is a way for the National Park Service to evaluate sites that are worth preserving. They wrote a whole section for what aircrafts are eligible. It was helpful to us. If this is eligible, then the National Park Service is supposed to care for it.”

At the conclusion of the project, Hines and Tisental agreed that the site had too much of a historic value for it to be salvaged for parts. Hines believes that the site qualifies for the National Register of Historic Places.

“When I was working with the park service they really hammered in this idea of ‘unimpaired.’ This idea to preserve the unimpaired for peoples enjoyment I think is really important and really speaks to what the national parks service is trying to do,” Hines said. “I think because of this really cool story that is associated with Leon Crane’s survival, it would really be a loss for the park to give up parts of the site. I not only thought that we shouldn’t salvage this but also that we should put it on the National Register of Historic Places because it’s a cool story.”

If you’re interested in learning more about what Florida Public Archaeology Network-Northwest Region’s projects, check out their Facebook page or website fpan.us/nwrc. Odd Colony’s next Archaeology on Tap will be “A Sticky Situation: Turpentining in Florida” on Feb. 12 at 6 pm.